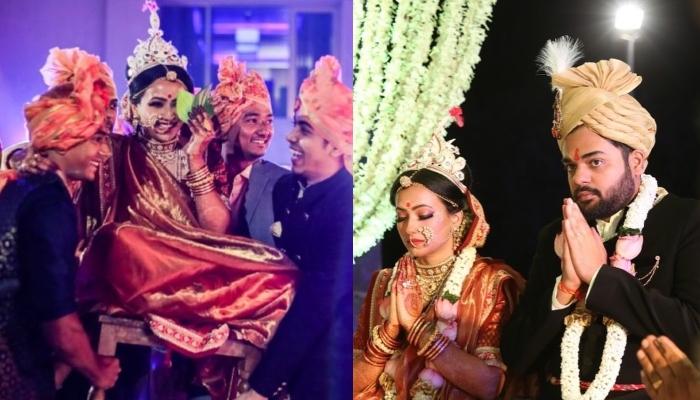 We often see child actors making their mark in the industry with prominent roles and impressible acting, but seldom are they seen making their way back once they grow up. From Ayesha Kapur (Black), Jibraan Khan (Kabhi Khushi Kabhie Gham…), Parzan Dastur (Kuch Kuch Hota Hai), Angelina Idnani (Ta Ra Rum Pum), Athit Naik (Kal Ho Naa Ho), Pooja Ruparel (Dilwale Dulhania Le Jayenge), amongst many others, began on a promising note as child actors and now we all wish to see them back on silver screens! (Also Read: Unseen Pics Of Sonam Kapoor And Anand Ahuja From Their Wedding Album Look Straight Out Of Fairy Tale)

Once such child actor from the lot is Shweta Basu Prasad, who is best known for her roles in Makdee and Iqbal, won a National Award at the tender age of twelve. However, Shweta virtually fell off the grid after being entangled in a prostitution racket controversy in 2014. Eventually, the dark clouds drifted away and the ray of sunshine came into her life as her prince charming, filmmaker Rohit Mittal. Shweta started dating an upcoming filmmaker, Rohit, who was introduced to her by Anurag Kashyap when she was working as a script consultant for Phantom Films. Gradually the friendship between them blossomed into love, and now, Shweta and Rohit have embarked the journey of their ‘happily ever after’. The Bengali girl, Shweta’s pre-wedding ceremonies began with Aiburobhat, which is a Bengali bridal shower. The actress looked pretty in a traditional red-border Bengali saree. December 11, 2018, witnessed the haldi and mehendi ceremony of Shweta and Rohit, wherein the to-be bride can be seen swaying to the beats while the mehendi is being applied on her legs. She looked prettiest in a pink Benarasi saree. Shweta and Rohit also had a pool party organised at The Grand Hyatt, Pune. Later, they had a grand engagement party in the evening of December 12, 2018. On December 13, Shweta and Rohit finally became each other’s forever and were pronounced husband and wife as per Bengali and Marwadi rituals. Shweta made for one of the prettiest Bengali brides ever! Her saree was draped in an aatpoure style (traditional way of draping a Bengali saree), with chandan decorated upper brows and chin. What’s noteworthy was her traditional Bengali jewellery and that big smile on her face! Shweta shared official photographs of her wedding ceremonies including haldi, mehendi, Aaibudo Bhaath, engagement ceremony and finally their D-day. She kept some common lines as the caption to all the pictures, thanking everyone to be a part of their wedding. She wrote, “Happy times go by in a flash but also last forever! Rohit and I would like to jointly thank everyone for being part of our wedding. Chiefly, our families for relentlessly and very patiently planning everything for the wedding @surmittal @minibose30 Ruchi Mittal, Ashok Mittal and everyone else involved. Thanks to all our family and friends who made this wedding so memorable! Thanks to all our well wishers” (Also Read: Aashka-Brent Tied The Knot, Here Is The Complete Wedding Album Of This Unique ‘Firangi Ki Baraat’)

Sharing pictures from Aaibudo Bhaath, Shweta wrote, “Here, at Aaibudo Bhaath (bride’s honour lunch at Maternal uncle and grandmom) at my dida and mama’s house, I wore a red-bordered saree, a gift from Maa @mini_bose_30 10th December 2018”. Here are the pictures:

Giving us a glimpse of her colourful mehendi ritual and ring ceremony, which took place at Hyatt Place, Pune, she wrote, “Also a big shout out to @hyattplace Pune for absolutely amazing hospitality. Suchitra Chikane from guest service and chef Priyanka and all the Hyatt staff who made us all feel at home! yes that stage is on top of the swimming pool! @ira_diary @iracreation @VaibhavGadahirephotography the best photographing team ever! also contributed by friends and family. Hair by: @mayuramore”

Finally sharing her wedding photographs, Shweta thanked Sabyasachi for the outfit and wrote, “It was a dream to wear @sabyasachiofficial saree for my wedding. This saree is from the designer’s Baroda collection. An absolutely exquisite, timeless masterpiece! Teamed with @tanishqjewellery choker and earrings and @amrapalijewels Rani haar, Nath and Borla. Hair by: @shilpa.s.patil Make up: self @shwetabasuprasad11”.

Rohit and Shweta got engaged in a private ceremony in June 2018, and confirming the same to Times Of India, a source had shared, “The two have been together for four years now and got engaged last year. Both belong to the film fraternity and have collaborated on short films. Not many know that filmmaker Anurag Kashyap was instrumental in getting the two together as both Shweta and Rohit are close to him.” Further confirming their engagement, Shweta has stated, “Yes, it is true. Rohit and I are engaged but both of us are extremely private about our personal lives so we don’t talk about it.” As per sources, it was Shweta who proposed the love of her life Rohit for marriage in Goa and she wanted to take her relationship to the next level and it didn’t matter who takes the first move. And later, her to-be-hubby, Rohit popped her ‘the question’ in Pune (his hometown) and the rest we know, is all history! Revealing how love blossomed between Rohit and Shweta, a source was earlier quoted as saying, “Anurag, who had been guiding Rohit in filmmaking techniques, introduced him to Shweta. They hit it off right from the word ‘Go’. They are very serious about each other, but want to focus on their careers right now.” The source also added, “Though the feeling was mutual, it was Shweta who proposed to Rohit in Goa first. He then proposed to her in Pune (his hometown). While marriage is on the cards, the couple is not in a hurry to walk down the aisle.” And looks like they have finally decided and how!

The couple has been dating for over four years and were in a live-in relationship for over two years, prior to their marriage today. In a throwback interaction, Shweta confirmed dating Rohit and had said, “Okay. Yes, we are dating and it’s been almost two years. We are in a happy space and enjoying our relationship. We haven’t thought about marriage but yes it’s going smooth. I met Rohit at Phantom Films and that’s how it all started.” (Also Read: The Complete Wedding Album Of Milind Soman And Ankita Konwar’s Assamese-Style ‘Shaadi’) Shweta and Rohit, heartiest congratulations to the both of you on your wedding!

DH Deciphers | Gold demand down but prices are up – how’s that possible?