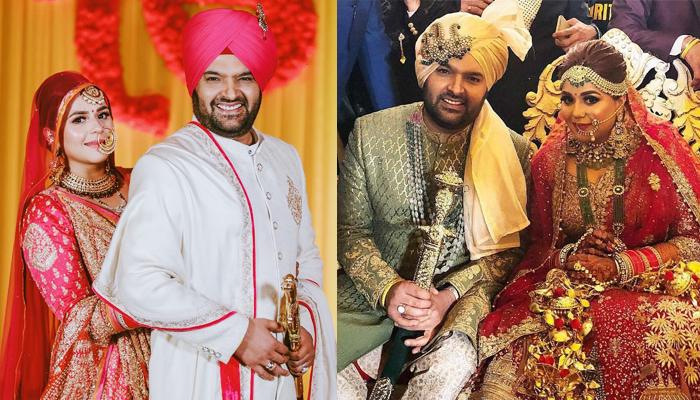 Celeb weddings and reception parties are raining in from everywhere these days. Just yesterday, on December 20, 2018, Priyanka Chopra Jonas and Nick Jonas hosted their third wedding reception in Mumbai. And now, get ready for another celeb reception bash! We are talking about Indian comedy king, Kapil Sharma who got married to his long-time girlfriend, Ginni Chatrath on December 12, 2018. (Suggested Read: Nick Is Having Trouble In Matching His Steps While Dancing On ‘Desi Girl’ With Wife Priyanka Chopra) 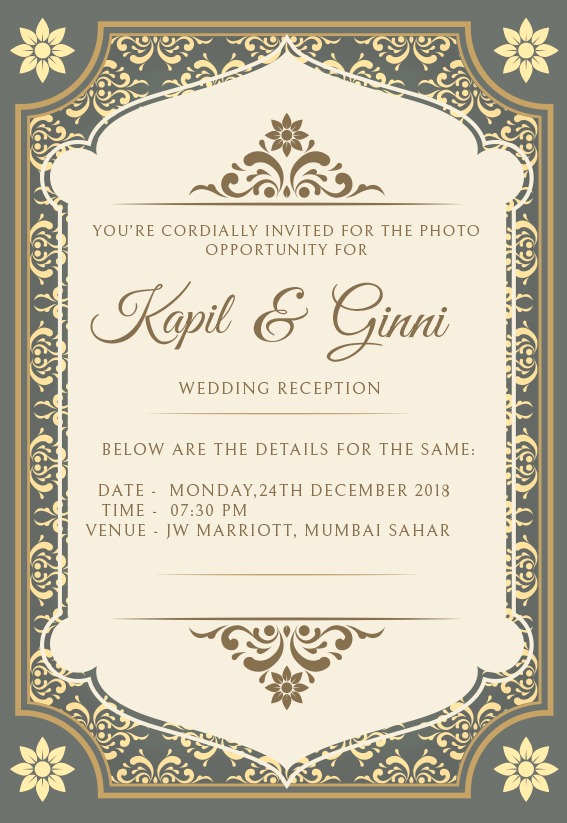 Post their wedding, Ginni’s vidaai happened and she went to Kapil’s ancestral home as per Hindu traditions. Kapil’s close friend and Comedy Queen, Bharti Singh posted a picture of Ginni’s sasural-coming, with a picture of the newbie bride’s footsteps in red dye (alta). Check out: Before the wedding, Kapil Sharma had confirmed and detailed out the itinerary of his wedding. He told a media house, “The wedding is on December 12 in Jalandhar. That’s Ginni’s hometown. We wanted to keep it low key. But Ginni is the only daughter in her family. Her folks wanted the wedding to be on a lavish scale. And I completely understand their sentiments. My mother also wants the wedding to be lavish. My mother has been saying that I should get married for a long time. Suddenly I realised that ‘abhi age ho rahi hai’ (I am getting on in age). So, I thought what if she says ‘no’ and after one or two years, no one agrees to get married to me.” (Also Read: Unseen Pic Of Taimur Ali Khan And Kareena Kapoor Khan From Vacation Proves Where He Got Swag From) Opening up about his love story, Kapil recently told Bombay Times, “My friend told me that Ginni likes me, but I rubbished him. One day, I directly asked Ginni, ‘Tu mujhe like toh nahi karti?’ and she denied. Later, at a youth festival, I introduced her to my mother as one of my students. Then I came to Mumbai for the ‘Laughter Challenge’ audition and by then, I had also appeared on a Punjabi TV channel. Ginni was impressed with me because I was studying and working at such a young age. When I got rejected for ‘Laughter Challenge’, I called her and said, ‘Please don’t call me’. I felt that our friendship has no future, as her financial condition was better and we belonged to different castes. So, we took a break. When I got selected for Laughter Challenge after auditioning again, she called to congratulate me.”

During the course of the interview, Kapil also shared how once, his mother took the marriage proposal to Ginni’s father, and he rejected it. Kapil revealed, “When I started earning well, my mother took my marriage proposal to her family, which got rejected. Inke papaji ne bade pyaar se bola, ‘Shut up’ (laughs!). Thereafter, I got busy with work, while she pursued MBA in finance. I guess, she kept studying to avoid marriage proposals. At that time, I was settled in Mumbai, and so much was happening in my life. I then realised ki itna kuchh hua hai, but isne kabhi mujhe disturb nahi kiya. Itna patience kisi mein nahi dekha maine. Jab ye sab gadbad chal rahi thi, that’s when I decided that it was the right time to marry. It was my decision, because ye toh padhai kare hi jaa rahi thi (laughs!). So, on December 24, 2016, I called and told Ginni that I wanted to marry her. My mother has always been fond of her.” In an interview, newbie wifey, Ginni opened up as to why she thought Kapil is the ‘one’ for her. She remarked, “Kapil is a gem of a person and very caring. There is no one like him and I can’t find anyone better than him. He is a family man. If he loves his mother and sister so much, it’s certain that he would love his partner, too. He is a star for the audience, not for me. He is still humble the way he was years ago and hasn’t changed at all.” Ginni further added, “I trust him blindly. Whatever he says, that’s the truth for me. I don’t care what the world says.” Kapil shared his transformation in thoughts from believing that ‘he would never be able to marry’ to ‘the importance of having a partner’. Kapil shared, “I used to feel that I wouldn’t be able to marry, since I am not a responsible person. I love two things — my work and music. I have many friends in the music industry and I would often jam with them, without taking stock of time. Initially, I wouldn’t like anyone calling me at that hour. After a point, however, I started feeling the void. I think that with time, I realised the importance of having a partner.” Earlier, when Kapil was asked about his plans of 2019, he had said, “I would like to balance my personal and professional life. I will take breaks regularly aur ghoomna hai. I will take time out for myself, it’s important. I have decided to not trust people blindly. I have also quit alcohol.” While Ginni said, “I am looking forward to our marriage (smiles).”