Home Planning Reception A New Year, a new life together 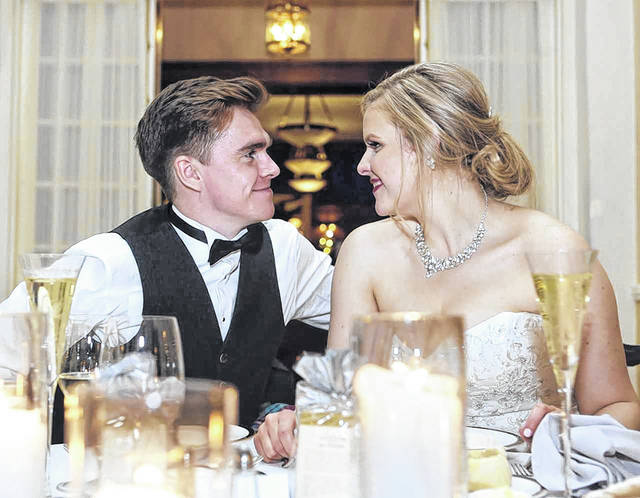 Liam Robertson from Paisley, Scotland, and Olivia Davison from Dallas, Pa., share a moment during their wedding reception Saturday evening at the Westmoreland Club in Wilkes-Barre. – Bill Tarutis | For Times Leader 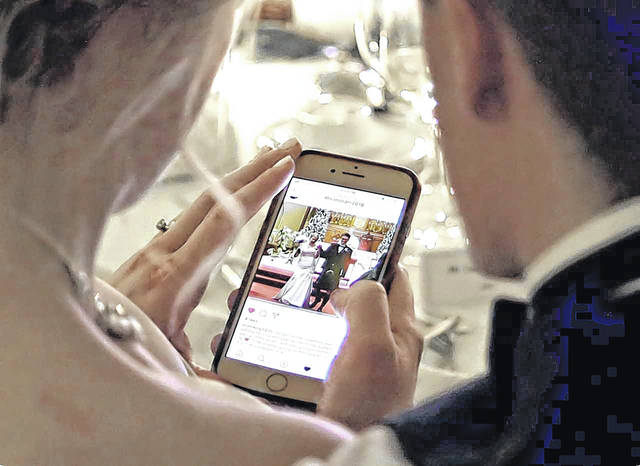 The bride and groom look at a cell phone photograph of their wedding ceremony, which took place earlier that afternoon at St. Nicholas Church in Wilkes-Barre. – Bill Tarutis | For Times Leader 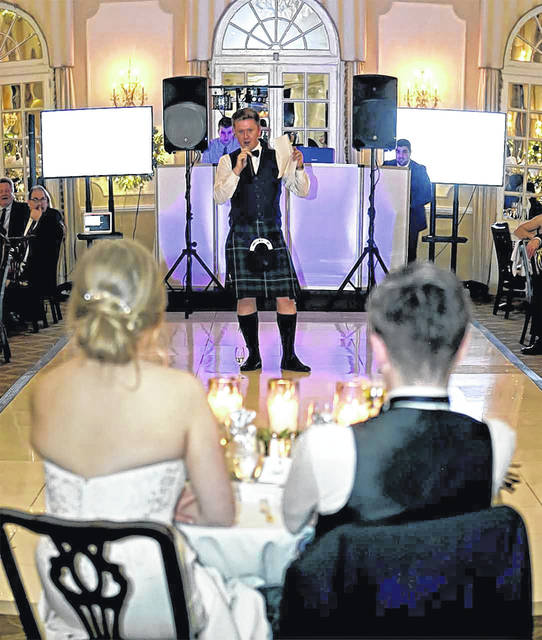 Joshua Robertson, who served as best man for his brother, Liam Robertson, gives a toast during the wedding reception. The wedding party included the bride’s sisters Kristin and Alexis Davison as maids of honor and Hannah Robertson, sister of the groom, as bridesmaid. Flower girls were Betsy and Charlotte Novitsky. – Bill Tarutis | For Times Leader

WILKES-BARRE — If you peeked into the Westmoreland Club on Saturday and noticed the bagpiper, the table filled with shortbread for guests to take home — and the groom, best man and their dad all wearing kilts — you might have wondered how this wedding, dappled with hints of Scotland, came to Wilkes-Barre.

For the answer look back to 2013 when, three weeks into her semester abroad at the Glasgow School of Art, Olivia Davison from Dallas, Pa., visited a club and danced with a young man named Liam Robertson who, before the evening ended, asked for her phone number.

“I couldn’t give him my phone number because my phone was lost,” Olivia said. “I gave him my email instead, and he thought I was trying to reject him.”

But her feelings were anything but rejection.

“I felt an immediate trust. I felt as if I’d known him my whole life,” said Olivia, who is the daughter of Anna Marie and attorney Robert Davison of Dallas. “We’re like cookies and milk, yin and yang.”

Soon the young couple was inseparable, and Liam, now 28, introduced Olivia, now 26, to his parents, Deborah and William Robertson, who live outside of Glasgow.

“She was so lovely,” Deborah Robertson recalled. “We thought, what a shame she’ll be going back to America in a few months.”

Olivia did return to America — to earn her degree from Corcoran College of Art and Design in Washington, D.C., which is now part of George Washington University; to begin teaching art to children at The Basilica School of St. Mary in Alexandria, Va., and to explain to her family that she was in love with an engineer who lived an ocean away.

Big sister Kristin’s protective instincts arose and, as she explained on Saturday while giving a wedding toast, she told her future brother-in-law, “if you hurt my sister I’ll kill you.”

Also claiming to feel protective was Liam’s younger brother, Joshua, who explained during his wedding toast — to the laughter of the guests — that he challenged Olivia to prove she was from America by naming all 50 states.

“She passed the test,” he added.

For the better part of five and a half years, the courtship continued with trans-Atlantic visits every three or four months, and FaceTime every day Olivia and Liam were apart.

“It wasn’t easy,” Olivia said, “but I almost recommend it to people because you learn to communicate and bond in a different way.”

When she visited Scotland in April 2018, Liam had a question he wanted to ask face-to-face, but it was difficult to find the right time and place — in part because of all the rain that fell on “the wee small island of Arran” when the couple traveled there together.

“It’s a gorgeous place but it was pouring,” Olivia recalled. “And I was seasick when we got off the boat.”

It wasn’t until they were back at his home in Paisley, Scotland, near the end of that April trip that Liam asked Olivia to be his wife and she said yes.

By the end of the year, they would exchange vows in her home parish, St. Nicholas Church in Wilkes-Barre, where the bride remembers she once, as a little girl, laid the statue of the Christ Child in the nativity scene during a Christmas Mass.

That’s where she laid a bouquet at the end of the wedding service, as the choir sang the “Magnificat” in honor of the blessed mother.

Sentimental moments continued as the reception got under way, with the bride’s younger sister, Alexis, playing a video she had compiled to showcase the couple’s life, and the bride and groom dancing their first dance as husband and wife to Marvin Gaye and Tammi Terrell’s rendition of “Your Precious Love.”

After the bride and her father danced to the tune “Edelweiss” from the movie “The Sound of Music,” dad Robert Davison explained he had sung that song to each of his three daughters at bed time until they were about 7 years old.

The parents of the bride led the next dance of the evening, in honor of their 35th wedding anniversary, which they observed the following day.

Dancing and merriment ensued for the next few hours but, despite the earnest suggestions of a few guests, the groom did not demonstrate the Irish step dancing he studied as a youth.

The evening closed with family and friends linking arms and singing together, “Auld Lang Syne.”

Liam Robertson from Paisley, Scotland, and Olivia Davison from Dallas, Pa., share a moment during their wedding reception Saturday evening at the Westmoreland Club in Wilkes-Barre.

The bride and groom look at a cell phone photograph of their wedding ceremony, which took place earlier that afternoon at St. Nicholas Church in Wilkes-Barre.

Joshua Robertson, who served as best man for his brother, Liam Robertson, gives a toast during the wedding reception. The wedding party included the bride’s sisters Kristin and Alexis Davison as maids of honor and Hannah Robertson, sister of the groom, as bridesmaid. Flower girls were Betsy and Charlotte Novitsky.