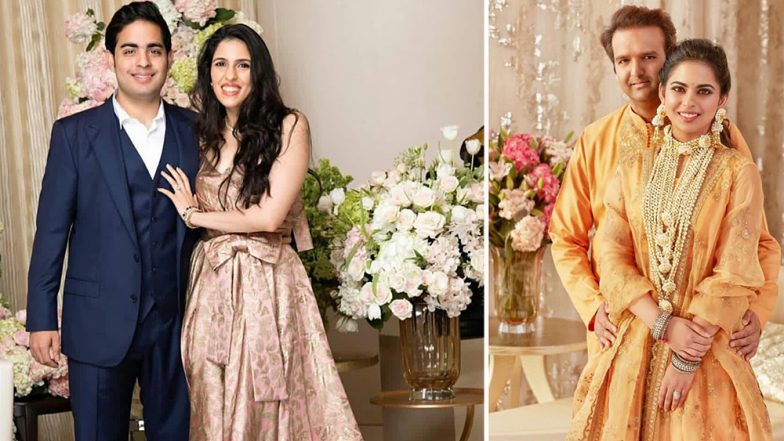 Isha Ambani and Anand Piramal’s wedding is a classic example of how a big fat Indian wedding looks like. From asking Beyonce to perform live on the Indian soil to getting all the Bollywood biggies to serve the food for a traditional ceremony, Ambanis and Piramals went all out with this special day. It was an extravaganza of some sort with an engagement bash in Italy and a sangeet ceremony in Udaipur. Well, the Ambanis are definitely not done with hosting their guests as they are currently gearing up for their son, Akash’s wedding with fiancee Shloka Mehta. But are you aware that he was supposed to get married before Isha and gave up the dates for his darling sister? Isha Ambani Says She and Brother Akash Are Twins Born Through IVF 7 Years After Parents Nita and Mukesh Ambani Marriage.

Isha in her recent interaction with Vogue magazine revealed how Akash was more than willing to give his wedding dates to her. Speaking about the equation she shares with her twin brother, Isha said, “Akash has the largest heart ever. He changed his wedding dates for me. He got engaged to Shloka before Anand and me, but he was like, “I’ll get married afterwards, you take my wedding dates.” He’s like one of the most—I don’t think there’s a word for it in English—“dayalu” humans in this world. He’s empathetic, gracious and gentle, just like Shloka.”

Isha Ambani in her latest shoot for Vogue India

Revealing the details about the bond her hubby shares with the Ambani brothers, Isha went on to elaborate how their camaraderie is one to watch out for. “My siblings love him (Anand). He is hysterical and always has everyone in splits! One thing that he always tells me that I did not practice in my life earlier, is spirituality. He quotes the Bhagwat Gita often. Through him, I have learnt that in life, nothing can substitute good thoughts and good deeds. Akash and Anant look upon him as an older statesman of the family.” Isha Ambani Looks Elegant and Classy On Vogue India’s Latest Cover – See Pic.

Isha may be the only daughter of India’s richest businessman but she’s very down to earth. From revealing she was always a tomboy to explaining why her Instagram account is private and not public, the girl is an icon to look up to. Here’s wishing her all the good luck and happiness in this world – not that she needs any of this.