Home Planning Reception Alia Bhatt Admits She Did Not Want To Get Married Until 30,... 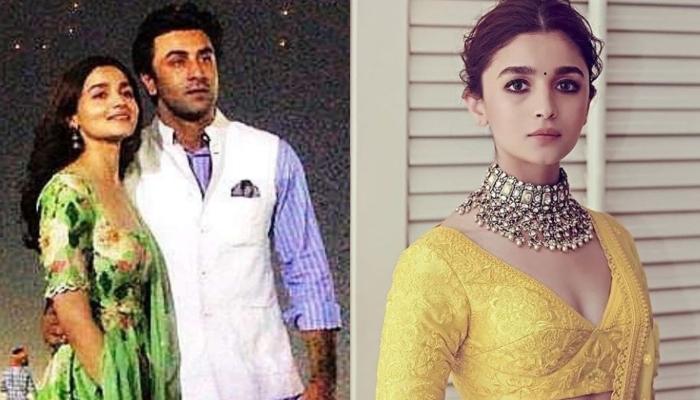 From going out on dates and vacations, doing their first film together to bonding with each other’s families, Alia Bhatt and Ranbir Kapoor seemed to have taken concrete steps in building their relationship since their friendship transformed into love. It all began with Alia confessing her ‘crush’ on Ranbir, followed by Ayan Mukerji announcing a film with Alia and Ranbir together. Then, Ranbir terming their relationship as ‘really new’ and the lovebirds making the first appearance together at #SonamKiShaadi hand-in-hand, Alia and Ranbir have been keeping us glued to their whirlwind romance! (Also Read: Aaradhya Bachchan Says ‘Bas Karo’ To The Paparazzi At Akash Ambani And Shloka Mehta’s Reception)

After the big-ticket weddings in 2018 including Deepika Padukone-Ranveer Singh and Priyanka Chopra-Nick Jonas, Bollywood might be gearing up for yet another big fat celeb shaadi in 2019. If reports are to be believed, Ranbir Kapoor and Alia Bhatt might get engaged after the release of Brahmastra this year. According to the latest reports, Bhatts and Kapoors will meet a pandit in April to discuss wedding dates, as soon as Rishi Kapoor comes back from the US. Speaking about the same, a source has revealed to the portal, “Bhatts and Kapoors will meet a Pandit together to zero down on some auspicious dates for the shaadi and one of those dates will be finalised. There is loose talk that the Pandit meeting date has been fixed up for April.” Also, as per a Mumbai Mirror report, the Brahmastra lovebirds are all set to buy a new ‘love nest’ together in New York City. According to the same report, Alia Bhatt and Ranbir Kapoor are also planning to make a ‘chic little studio’ their lover’s paradise. The report also states that Ranbir’s mom, Neetu Kapoor is bestowed with the responsibility of hunting their new abode for the now what looks like, ‘soon-to-be-married’ couple. It was also reported that Neetu had checked out a few properties too, for the same. Karan Johar released some unseen footages from the Koffee With Karan episodes of season 6, and one such clip had grabbed all the attention. It is about Alia Bhatt speaking about the time in her life when she didn’t want to get married till she turned 30. The Kalank star said, “There was a time in my life where I was like ‘Oh my god, I won’t get married until I am 30 and I need to act’. But that’s also when you have not really met the right person. So when you feel like you’re in a space where you’re very comfortable, and it feels very peaceful and right, then there is no timing that really matters.” (Also Read: Akash Ambani Introduces Shloka Mehta To Media As, ‘Meri Biwi Se Milo’, Her Reaction Is Unmissable) When Karan Johar, Deepika Padukone, Alia Bhatt further went on discussing how it is believed that women are unattractive post-wedding, the Gully Boy actress detailed down on how she is not someone who is calculative about her life. She explained, “I have never been calculative about my career or the choices that I have made. This would be a full calculation. ‘Mere ko shaadi nahi karni hai because I still want to be a star, I still want to be an actress, or I want to be desired. That’s calculation, it’s manipulative.” Alia Bhatt went on to say, “It’s kind of proven that it’s not the actors that are driving the film, it’s the content. Whether we’re married or single or relationship, I don’t it matters.” Sometime back, in an interview, Alia Bhatt had expressed her wish to not get married anytime soon and marriage is not on her mind as of now. Sharing that she doesn’t want to be in a live-in relationship, Alia had said, “Yes, I’ve not set any deadline, because it doesn’t really matter. I may be like, ‘Listen, I love you, so let’s get married and live together but I will still work.’ So, I may get married just to live with that person. It’s also because I don’t want to be in a live-in relationship. I don’t want to live with someone until I get married. So, it may happen for that reason”. Unlike her fellow actresses in the industry like Anushka Sharma, Sonam Kapoor Ahuja, Neha Dhupia, Bipasha Basu Singh Grover, Sagarika Ghatge and many others, Alia Bhatt wants to get married early. Alia further shared, “Nothing is cast in stone, right? So, if I feel that I’m in a position where I want to take such a step, then I will. I’ve always believed that I would get married because of kids. So, if I am like, ‘This is the time I want to have my children and am also ready to have babies,’ I will get married”. (Also Read: Akash Ambani And Shloka Mehta’s First Picture As Husband And Wife From Their Wedding Reception) Are you excited to see this Brahmastra couple as husband and wife in real-life? Keep us posted!