Home Honeymoon Her photo was in his wallet before chance meeting

Dale Robbins instantly recognized the girl in line behind him at Henderson State College’s registration in August 1955.

He had, after all, carried her photo in his wallet for three months.

The first time I saw my future spouse:

She says: “He had a wonderful smile. He was very handsome, I thought, but his smile was just really wonderful.”

He says: “I was generally leaning toward brunettes most of my life until then but when I saw her she was very definitely blond. She was good-looking and I was interested.”

On our wedding day:

She says: “I had spent many nights at my grandparents’ house but I had never gotten to come down the stairway in my pretty pink suit that my mother had made and got to toss my corsage to my cousins at the bottom of the stairs. It was fun.”

He says: “She was beautiful as usual, radiant. We had a wonderful wedding and reception.”

My advice for a long happy marriage:

She says: “Apologize, and try not to be too sensitive and pray a lot and laugh as much as possible.”

He says: “Love. We’ve very definitely been faithful to each other and we enjoy doing things together and that’s where we’re supposed to be.”

Dale had taken off the year before at Henderson (now Henderson State University) to work as band director at Ashdown High School and in May 1955 he had taken his band to a contest at Arkansas High School in Texarkana. He saw Gail Reveley practicing her twirling in the middle of the gym that day and he walked over to introduce himself to her.

“I was so nervous and in such a tizzy about my contest that I didn’t really pay a whole lot of attention right at that time,” Gail says.

The next morning, he saw her picture in the Arkansas Gazette, along with the other honor graduate from her high school in Stephens.

“I tore out her picture and put it in my wallet,” he says. “Three months later I was standing in line at Henderson and there she was.”

Gail was an incoming freshman, but she was trying to register for advanced secretarial classes because she wanted to transfer after a year to the University of Arkansas, Fayetteville. Those classes were almost full, though, and the registration workers didn’t want to let her take a slot reserved for upperclassmen.

They were in line together a couple more times that day, and on one of those occasions, Dale invited her to a sock hop on campus. They had fun that night and started seeing each other regularly.

They were in the campus bookstore a week or so later when, as Dale opened his wallet to take out money to pay for his coffee, she saw her photo.

“I asked him why my picture was in his billfold,” she says. “He blushed a little bit but he said he had seen it in the paper and just clipped it out. I thought that was kind of interesting.”

They dated for the next year, seeing occasional movies and doing things around campus. Dale was a music major, and the music department took a bus full of students to Little Rock to see Damn Yankees, The Sound of Music and The Music Man at Robinson Auditorium.

“I had never seen a musical in my life and not a whole lot of them had either, so that was a very wonderful date,” she says. “We sat in the balcony and I had never been anywhere like that before.”

Dale was in the ROTC at Henderson and he got orders to report to the 101st Airborne in Little Rock.

“They sent all the guys there to Little Rock for their physicals and they found at that time that he had throat cancer,” Gail says.

Gail was by his side through three years of treatment. When that was done, he became band director at Fairview High School in Camden. Gail worked as an elementary school teacher.

Dale’s doctor warned that because of the amount of radiation he had received he would likely have some severe health problems by the age of 40.

“That was a pretty good while from where we were then, we decided, because I was 18 and he was four years older,” Gail says. “We decided to get married anyway.”

They exchanged their vows on March 27, 1959, in the Methodist church in Stephens. A reception followed in the home of Gail’s grandparents.

They hid Gail’s car in a parking lot behind a gas station in Magnolia before the wedding, figuring that their friends would decorate Dale’s car at the church and they would be able to leave for their honeymoon in Gail’s untouched one. But Gail’s uncle spotted her car from the window of his dental practice in the McAlester Building across the street and tipped off a friend, who told Gail’s dad a group was headed to decorate it.

“On the top of the car was written, ‘Hi Puddin” and Puddin’ is what my daddy called me. There was no doubt in my mind who had written that,” Gail says.

Her dad told her later that he had participated in the debauchery because he wanted to protect her car’s paint job by influencing the group to use something that wouldn’t damage it.

Dale and Gail drove to Texarkana after the wedding and then went on to Dallas the next day.

Dale got his master’s degree and then his doctorate and, in 1974, he and Gail moved to Magnolia. He recently retired from Southern Arkansas University.

They have two children — Allan Robbins of Kailua-Kona, Hawaii, and Alicia Kramer of Pearland, Texas. They have three grandchildren and two great-grandchildren.

Dale’s cancer recurred in 1972 and treatment once again put him in remission.

They enjoy traveling and over the years they spent time camping and skiing at the lake.

“My health has made me a little cautious about making some trips,” Dale says, “but the Lord has been good to us and we’re both getting on pretty well now.” 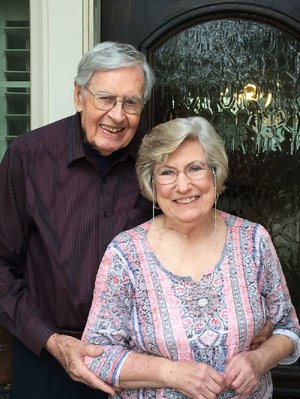 Special to the Democrat-Gazette
Gail and Dale Robbins have been married for almost 60 years. They met at college registration, but Dale had carried her picture in his wallet for three months by then. “The Lord just has mysterious ways of directing things,” he says. 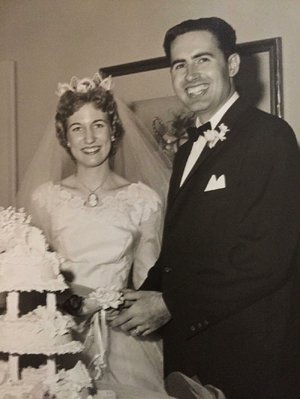 Special to the Democrat-Gazette
Gail Reveley and Dale Robbins of Magnolia were married on March 27, 1959. They have been together through sickness and in health. “We had a bit of stress there and that usually causes you to go one way or another but it drew us closer to the Lord,” Gail says.

Miss Manners: Engaged couple have their priorities upside down