Outside of the pub, Ciara feels it’s unfair that Ben can’t get to know David. Ben reminds her that a lot of people in Salem still see him as dangerous. Ciara sighs and tells him that she let Eli know that the lighter she saw him with at the cabin looks a lot like the one JJ found in Claire’s jewelry box.

At the Inn, Eve calls Claire being a firestarter an impulse act. Why should her future be ruined because of that? Besides, “He killed my daughter. He needs to pay.” They’ll use the lighter to frame him. Claire is still worried that Haley and Tripp will fall in love. Claire threatens not to let her down. Over in the storage room, Jenn unlocks the door and gives Jack an ultimatum. Either marry Eve or they’ll figure out how to get his memory back together. Jack grumbles and considers her words. He knows they share something special but as strong as 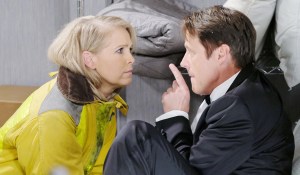 the connection was, he doesn’t feel it anymore. He’s sorry. He takes off. Back in the room, Eve calls the concierge and asks if they’ve seen her husband leave. “He was with a woman that looked like a dried up old twig,” she says. Jack appears and Eve sighs in relief. Annoyed, Jack fills her in on Jennifer kidnapping him. Eve shares how Eric was working with her and faked being a Russian informant to keep her busy. Eve becomes insecure but Jack reaffirms his commitment to her.

More: Interview with Billy Flynn on his upcoming projects

At the hospital, Justin agrees to marry Tripp and Haley.

At the loft, Haley and JJ make out wildly on the sofa. She breathlessly explains she couldn’t fight her feelings for him any longer, between kisses. Agent Laverne Smith arrives and deduces by the wedding gown Haley’s wearing that today’s her wedding. Haley smiles and uneasily tries to smooth her dress down as JJ wipes Dr. Pepper flavored Lip Smackers off his mouth. 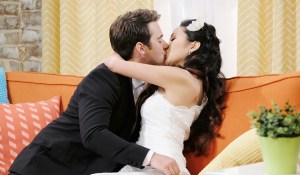 When Smith sees JJ, she knows who he is and wonders what he’s doing there. They lie that she forgave him for his betrayal and that because they’re going to be family, they made amends. Laverne’s not buying it. She starts quizzing Haley on Tripp’s likes and dislikes and when Haley trips up on his favorite ball team, JJ pulls up his socks. “Sox,” she says. “White Sox.”

Jennifer slouches into the square and runs into Adrienne. Adrienne asks why she’s dressed like a fireman and Jenn sadly shares her attempt at getting Jack to remember. Adrienne’s upset and offers to try harder to get him away from “that woman.” Jenn knows no other way she can stop Jack from marrying Eve.

Claire approaches Ciara and Ben outside the pub. She overheard them discussing 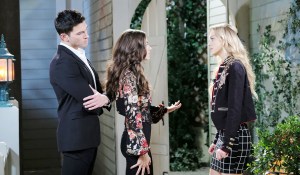 the lighter. Ben says it wasn’t his. Claire finds this all very strange and assumes Jordan must have been the firestarter. Ciara says Jordan’s not in her right mind but she knows Ben didn’t set it. Claire’s got to dash for the wedding. When Ciara doesn’t give her support, Claire whines. Ciara’s sure Claire will wind up on top. She always does.

Claire and Tripp arrive outside the loft. Claire fantasizes that Tripp and Haley have fallen in love. She asks if it’s true. He insists he’s not and repeats how he’s only marrying Haley so she can get her green card. Claire asks him to prove it so they kiss. Inside, Haley tries to make her wedding look legit but Laverne’s getting antsy. JJ opens the door and Claire and Tripp jump apart, startled. JJ whispers that Agent Smith is inside and Claire goes as JJ drags Tripp inside. Later, Kayla and Justin appear and Justin officiates the wedding.

More: Alley Mills’ dark comedy showcases her as a villainess

In Ben’s room, Ciara’s still brooding about Claire trying to start trouble. Ben says she didn’t. JJ took the lighter to the police. Ben doesn’t care about what any of them think of him. He asks Ciara if she’s starting to doubt him. Ciara denies that. She thinks back at how he treats her – like she’s precious. “You are,” he says. She’s never been treated this way before.

Jack and Eve arrive at the square, giggling and kissing. Adrienne appears unsmiling. She congratulates 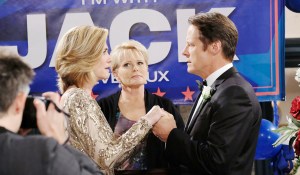 them on their special day and asks Eve to get past their differences. She offers to officiate their wedding. Jack’s puzzled. Eve brushes her off but Jack thinks it’ll look good to have his sister bless his union. Jenn pokes her head in, surprised at what Adrienne’s offering. Privately, Adrienne lets her in on something. Eve and Jack talk to the people in the crowd about their “legit” marriage vs. Haley’s fraudulent one. Nearby, Claire plays back a recording she made of Tripp’s confession. Back at the podium, Adrienne officiates the wedding and Jack can barely breathe as he stares at Jennifer while trying to get his vows out. Eventually, he stops the wedding.

Claire returns to the loft and before Tripp and Haley are pronounced husband and wife, Claire stops the wedding.

On the next Days of our Lives:

Ben has a romantic invitation for Ciara.

Regional Queensland is hit with more COVID and has no JobKeeper — can it survive?

Ready for romance? 6 places in Chattanooga to help you prep for Valentine’s Day gifts, experiences