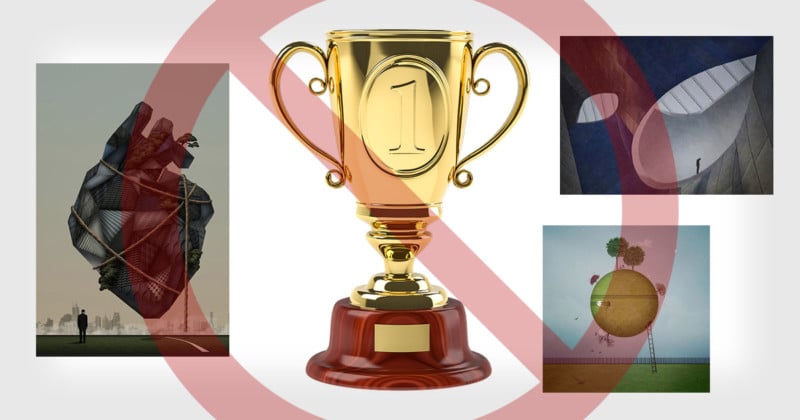 Controversy erupted back in February after it was discovered that award-winning Australian photographer Lisa Saad had won numerous prestigious photo contests with images that may have been created using other photographers’ photos. A number of major organizations have now decided to strip Saad of her prizes and memberships.

Photo Stealers was the first to report on the strange similarities between Saad’s surreal composite photos and other photos discovered on the Web.

A deep dive into Saad’s body of work uncovered numerous photos that were apparently created using other photographers’ photos (including stock photos), which violated the rules of contests Saad had previously won.

Since the scandal started, many of the organizations and contests involved have announced investigations into the accusations. And as those inquiries are ending, Saad has been disqualified from major awards and those prizes are being re-awarded to other photographers.

WPPI competitions’ rules specifically prohibit an entrant from submitting another artist’s work, using any stock photography images or using any portion of a photograph not personally captured by the entrant themselves in their submissions. Following a thorough examination of past entries, we have decided to rescind one member’s past WPPI awards and Honors of Excellence points. She will not be permitted to enter any WPPI competition for 5 years. WPPI supports artists’ rights and the intellectual property of our photography community. We cannot condone plagiarism.

On February 18th, the The Societies of Photographers disqualified her photos, fellowship distinction, and membership. CEO Phil Jones wrote:

[W]e have taken the decision to disqualify all images entered in the competitions, remove the Fellowship distinction and terminate the membership of the entrant in accordance with the Terms and Conditions of Membership outlined in the Members’ Handbook. Decisions like this are not reached easily or quickly and of course our main concern is to protect the interest of the photographic industry, whilst given the entrant every opportunity to defend themselves satisfactorily. Over the next few days we will be looking to upgrade images where possible, to fill the now vacant Photographer of the Year Award categories. We will also be updating all our media channels where possible.

On February 21st, the Australian Institute of Professional Photography (AIPP) rescinded its award and banned Saad. Its statement reads:

The Australian Institute of Professional Photography (AIPP) has rescinded all photographer Lisa Saad’s awards, titles and prizes, banned the photographer from entering future AIPP State or National Awards, and revoked her membership indefinitely, following the disqualification of an image entered in the 2018 Australian Professional Photography Awards (APPAs) last week.

Last week we released a statement that we were conducting investigations into the Portrait Category winning entry of 2018. Over this time an appointed panel investigated the entry, files supplied by the entrant and an accumulated body of evidence. The sole consideration has been whether or not the entry has breached submission guidelines. As part of this investigation, external industry experts and legal representatives have also been consulted. The submission guidelines states “The Promoter reserves the right in its sole discretion to disqualify any individual who the Promoter has reason to believe has breached any of these conditions”. We will be exercising that right with the 2018 Portrait Category winning entry and it is therefore disqualified from the awards.

The NZIPP announced its new winners going as far back as 2016 earlier this month:

AIPP just announced new winners this week for contests going as far back as 2015:

Photographer Karen Alsop took to social media to celebrate her new title of 2016 AIPP Australian Commericial Photographer of the Year:

Many of Saad’s awards came with cash prizes as well, and the controversy and fallout has had financial ramifications as well.

“All in all, the re-presenting of awards stripped from Lisa Saad has cost the AIPP a minimum of $28,000 in prize money and trophies, according to AIPP treasurer, Sara McKenna, in her latest report,” Inside Imaging reports. “She added that the AIPP was attempting to recover some of these lost funds – presumably from Lisa Saad herself.”