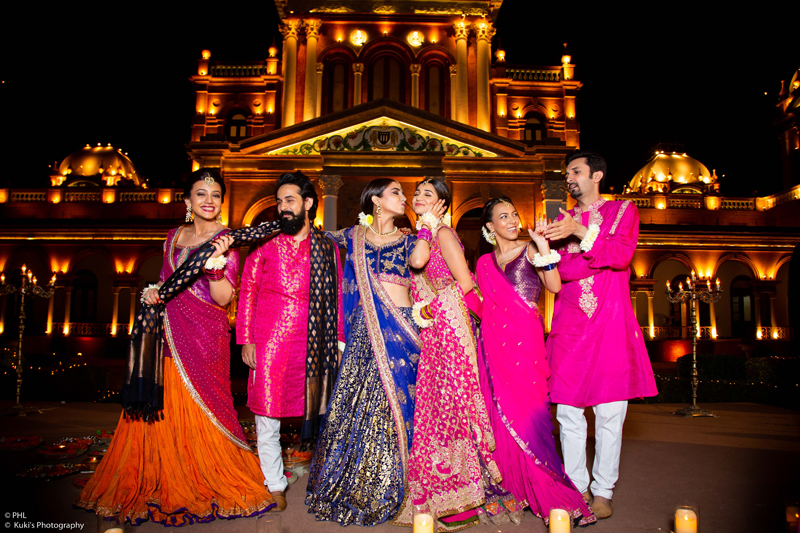 Asim Raza’s much awaited film ‘Parey Hut Love’ is just a month away from its release and we are ecstatic to finally see what all the hype is about. To add on to that, “Ik Pal” a festive, wedding tune just dropped and we honestly haven’t seen such a beautiful song, with a good hook and even-better visuals in a while for Pakistani cinema. The song features everything you would see at a Pakistani wedding, women dressed in lehngas and cholis with gajray in their hair with hefty jewellery that only adds to the grandeur. The song itself is an upbeat revival of the old Punjabi wedding tappa and is portrayed as a modern wedding dance number. The song also features Pakistani favourite Meera Ji. Hina Faroouqi, the production designer for the set commented, “‘Ik Pal is an upbeat Punjabi number so while creating its visuals we followed that particular language of festivity and grandeur. The larger than life visuals were achieved by building a large pavilion with the majestic Noor Mehal as the back drop. Consistent with the theme of wedding, flowers were an essential ingredient in creating the wedding vibes. We also added the gajras in the styling and an array of vibrant colour in the overall colour palette, which adds to the fun vibe of the song.” She further added, “Like the rest of the film, we had a colour palette for ‘Ik Pal’ as well. This rich colour palette was a task and a half to achieve as we had to constantly stay within the limitations of four-five colours but in the end it paid off and resulted in cohesive and harmonious visuals which were grand and festive. There is always a method to the madness; the colour palette, the theme, the cultural significance and the mood, which were kept in mind while creating ‘Ik Pal’.” Music director Azaan Sami Khan says, “The idea was always to make a festive dance track that was rooted in our own culture and music. Hence taking a traditional tappa ‘Ik Pal’ and creating a new rendition and melody around it. Presenting it in a modern yet soulful way. He further added, “As a composer, I couldn’t be more grateful to have such beautiful visuals to a song that I made. It’s incredible to see the lengths Asim, Sherry and the entire team went to, to ensure this song is mounted on a scale that it is.” The song has been sung by Hadiqa Kayani and Harshdeep Kaur and the lyrics are by Shakeel Sohail. The song features Sheheryar Munawar, Maya Ali, Meera, Ahmed Ali Butt, Zara Noor Abbas , Rachel Viccaji, Faheem Azam, Jimmy Khan, Parishey James, Frieha Altaf, Yousaf Bashir Qureshi, Nadeem Baig, Hina Dilpazeer and Munawar Siddiqui.