Herlene and Khari Benjamin originally met at engineering school and would see each other in passing. Coincidentally, they didn’t officially connect until years later when they were both stationed in the United Kingdom for work. During Herlene’s impromptu visit to London, their friendship grew and eventually blossomed into a relationship. “He brings actions to my thoughts stability and focus to my ideas, all with a kind spirit,” says Herlene. “He is simply the one I can’t live without.”

The picture-perfect proposal went down at their favorite restaurant in Trinidad. Khari’s explanation for what he loves most about Herlene is enough to bring a tear to anyone’s eye: “she keeps me grounded and dreaming at the same time.”

The couple had always known a destination wedding was in the cards, but it took some time to find a location that fit their needs and taste level. Funny enough, a particular rapper helped bring their vision to life. “I developed a hotel crush on The Four Seasons after watching Rick Ross’s ‘Diced “Pineapples’ video when it was then the Viceroy,” says Herlene. “The Kelly Wearstler decorated resort exuded unpretentious luxury. You felt welcomed into stunning surroundings and every detail was attended to.”

Scroll through the gallery for the best moments from Herlene and Khari’s Anguilla wedding.

Want to see your wedding featured in Bridal Bliss? Send your story and a link to your wedding photos to [email protected] for consideration. 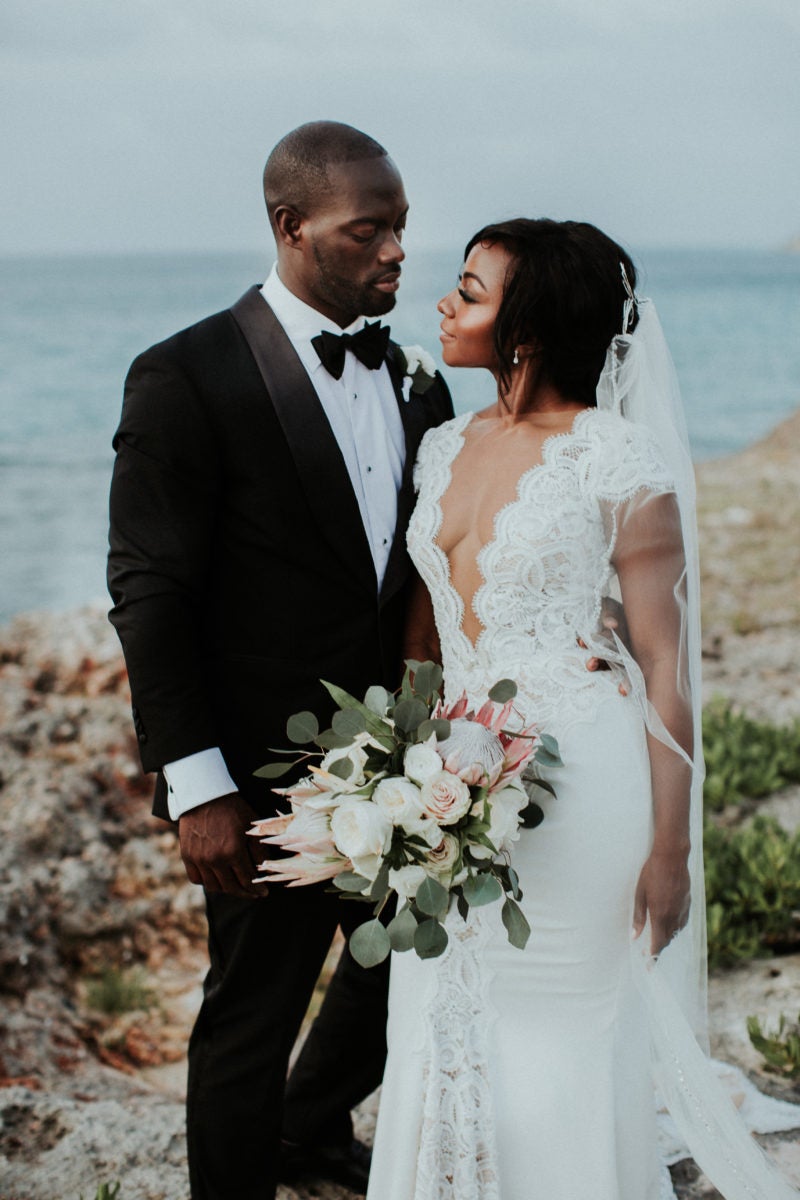 The Benjamins decided on a destination wedding due to their love of travel. “We wanted to ensure our guest relaxed and got a mini-vacation out of it.” 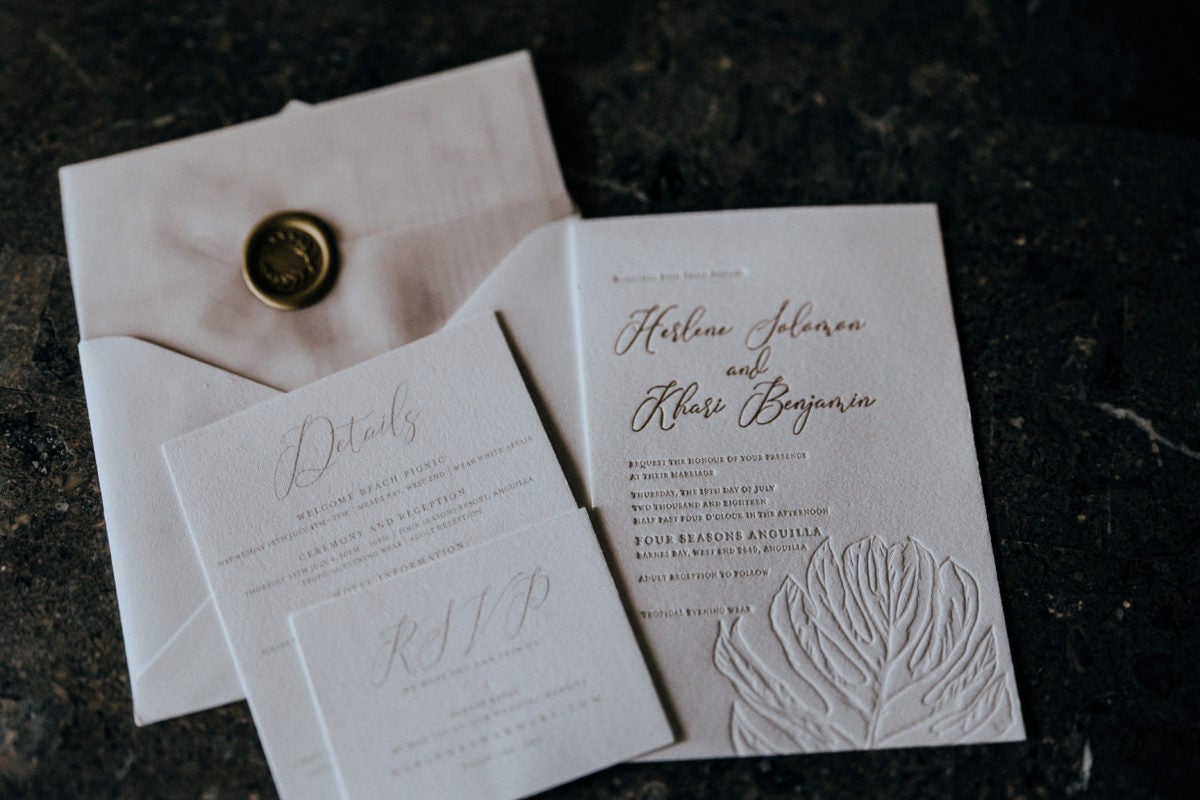 “We went to dinner at our favorite restaurant in Trinidad and Khari booked the private room,” Herlene told ESSENCE. “It was a small dining room, with a wall of glass looking onto the external water fountains. The food was fantastic (as expected) and our waitress was extra attentive. When it arrived my chocolate soufflé was replaced with a Cartier box holding a solitaire diamond and the words, ‘will you marry me,’ in edible font. ‘Of course it’s always yes,’ I said as I smiled and hugged my fiancé.” 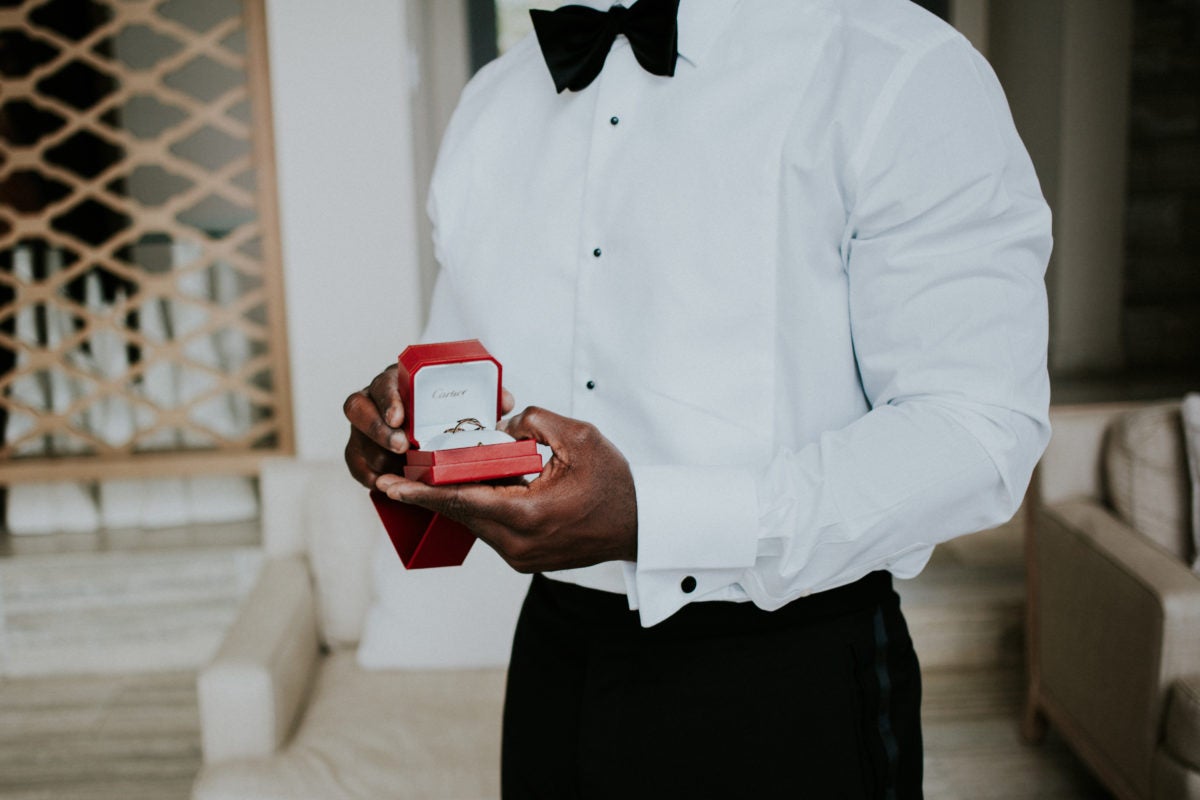 “I never held preconceived expectations of what a bride should be,” says Helene. “I saw the moment as a transition to another chapter and I get to share this experience with family and friends.” 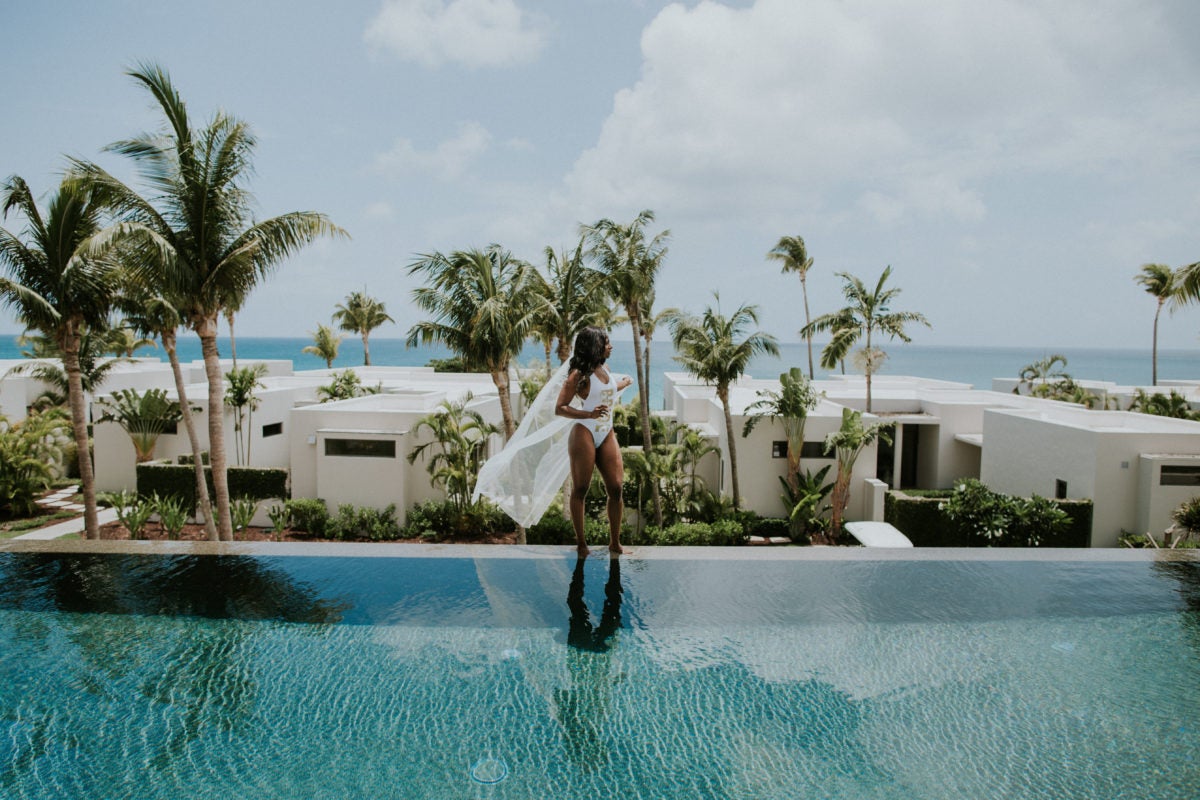 Herlene was lucky enough to find a hair and makeup artist all in one. 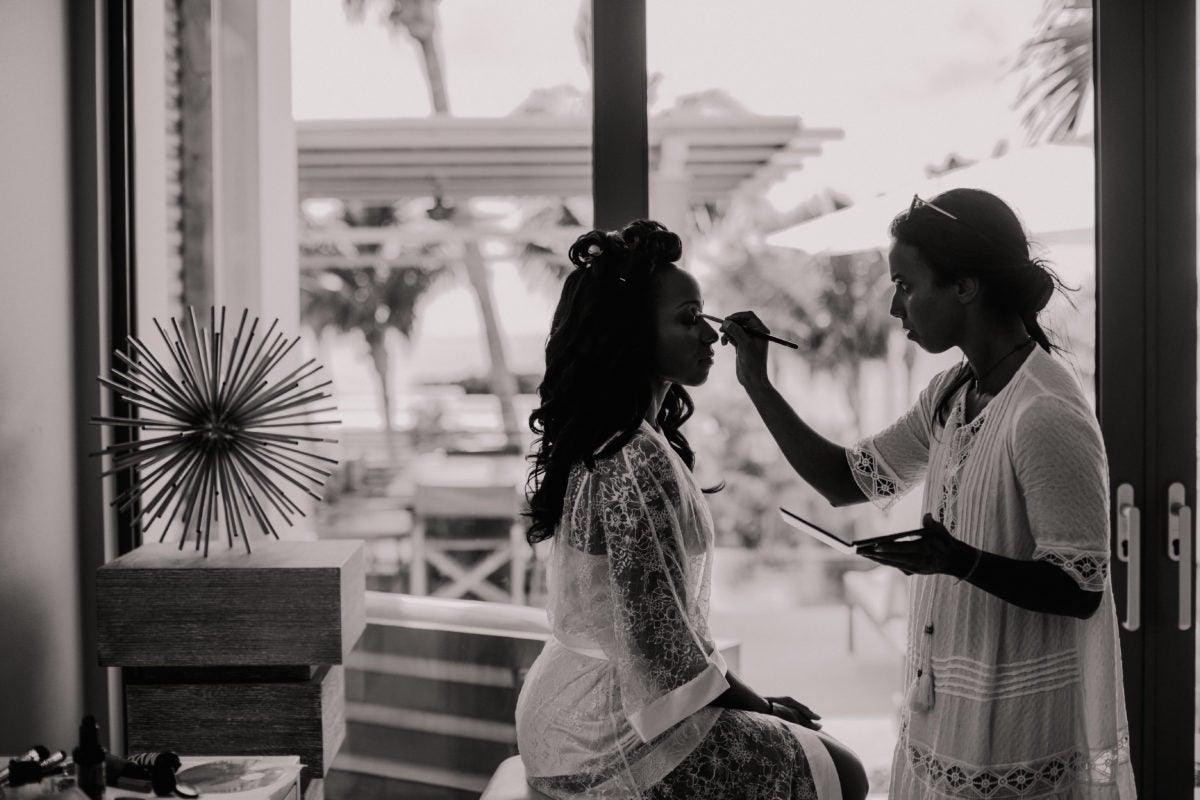 Khari says, “It is great when it hits you that you’re in love, better when you realize it is with the person you want to spend the rest of your life with. The best part when you marry the person!” 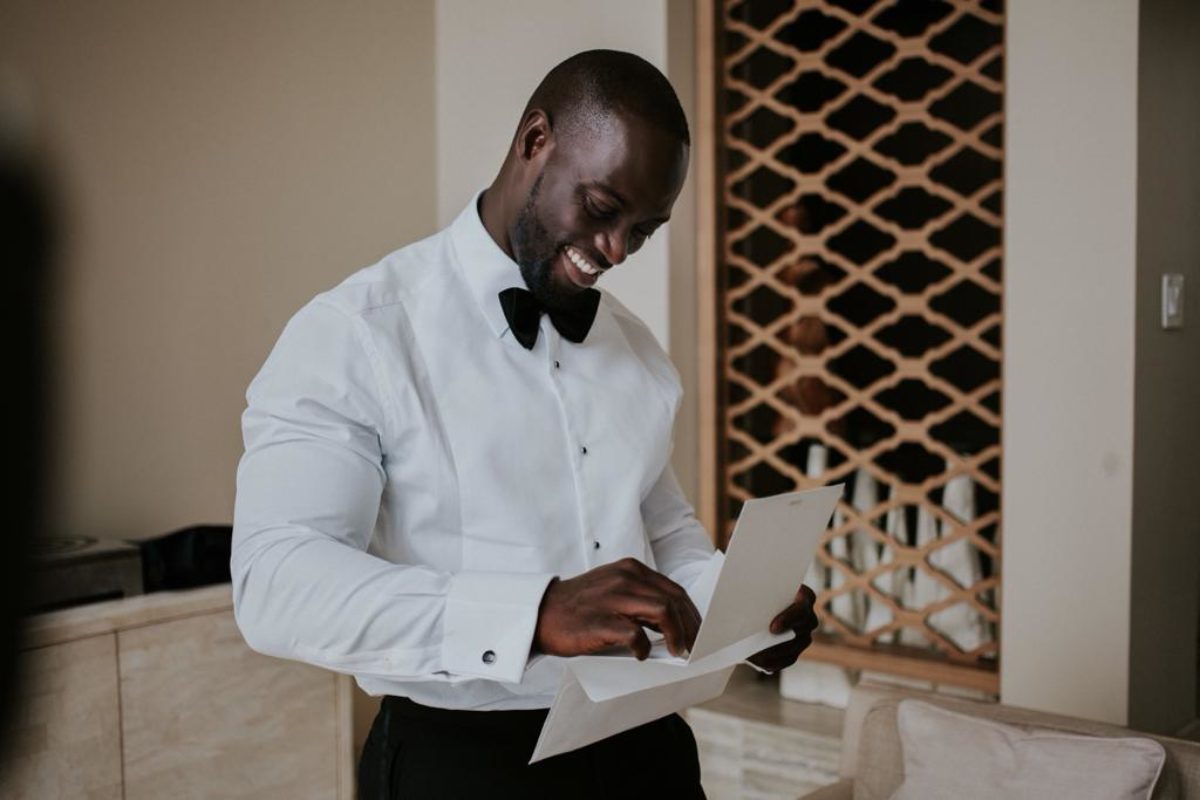 “The wedding planning is definitely the most stressful part, but as the day approached I let go of the anxiety and embraced the moments,” says Herlene. 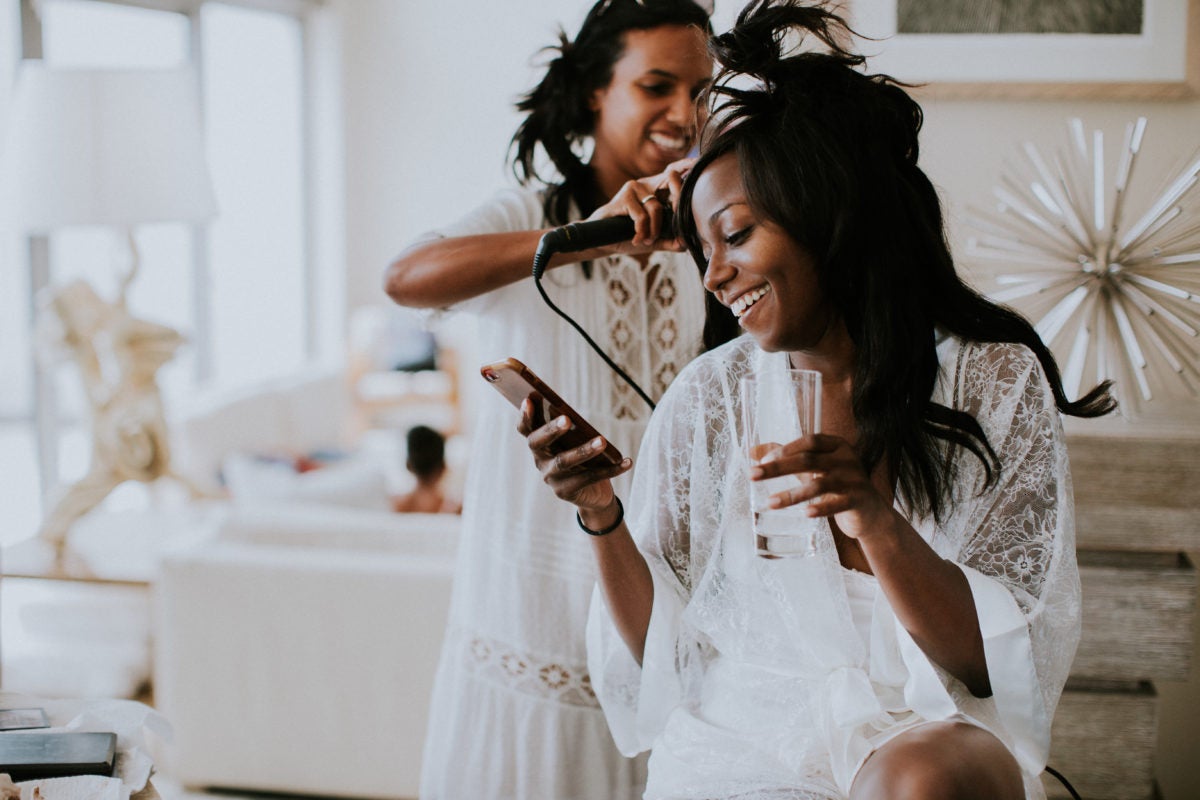 It Takes A Village

“My mom passed away and my dad is elderly,” explains Herlene. “So my godmother Pat played the lead role. She helped me get ready for one of the most important walks of my life.” 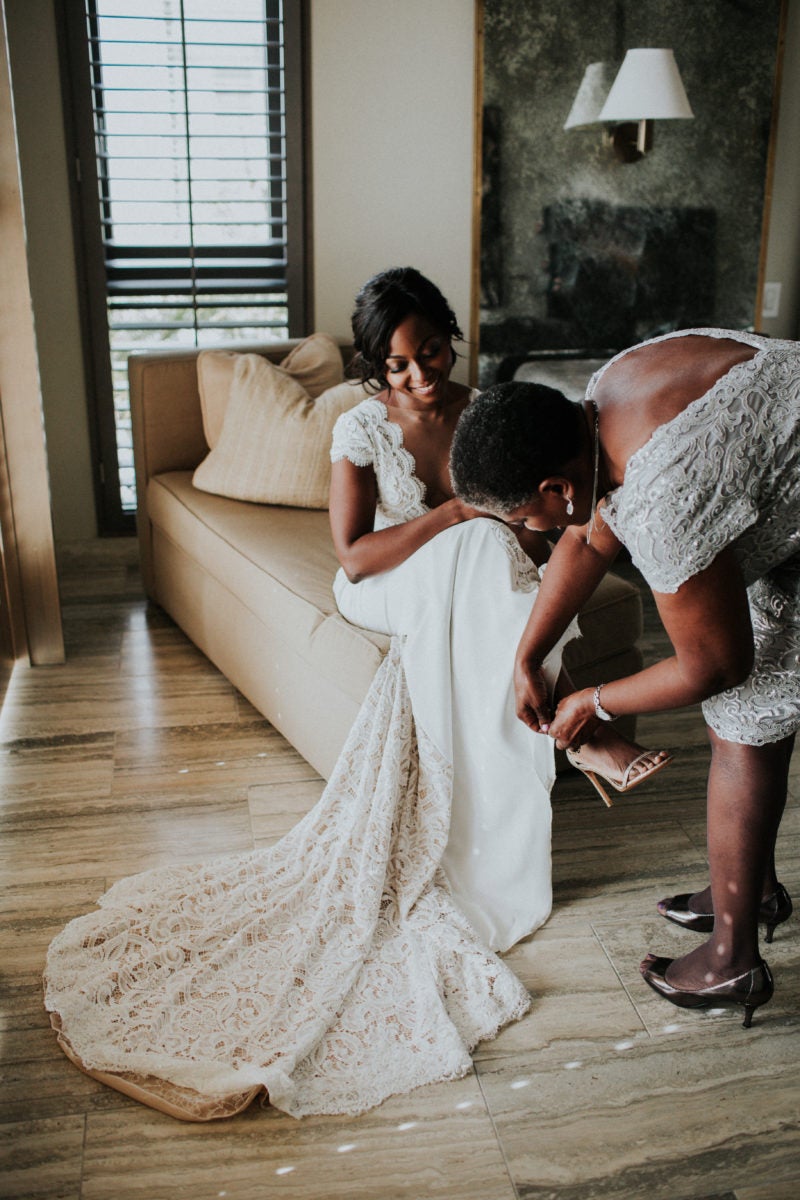 The couple said “I Do” in an intimate setting which included 48 guests. 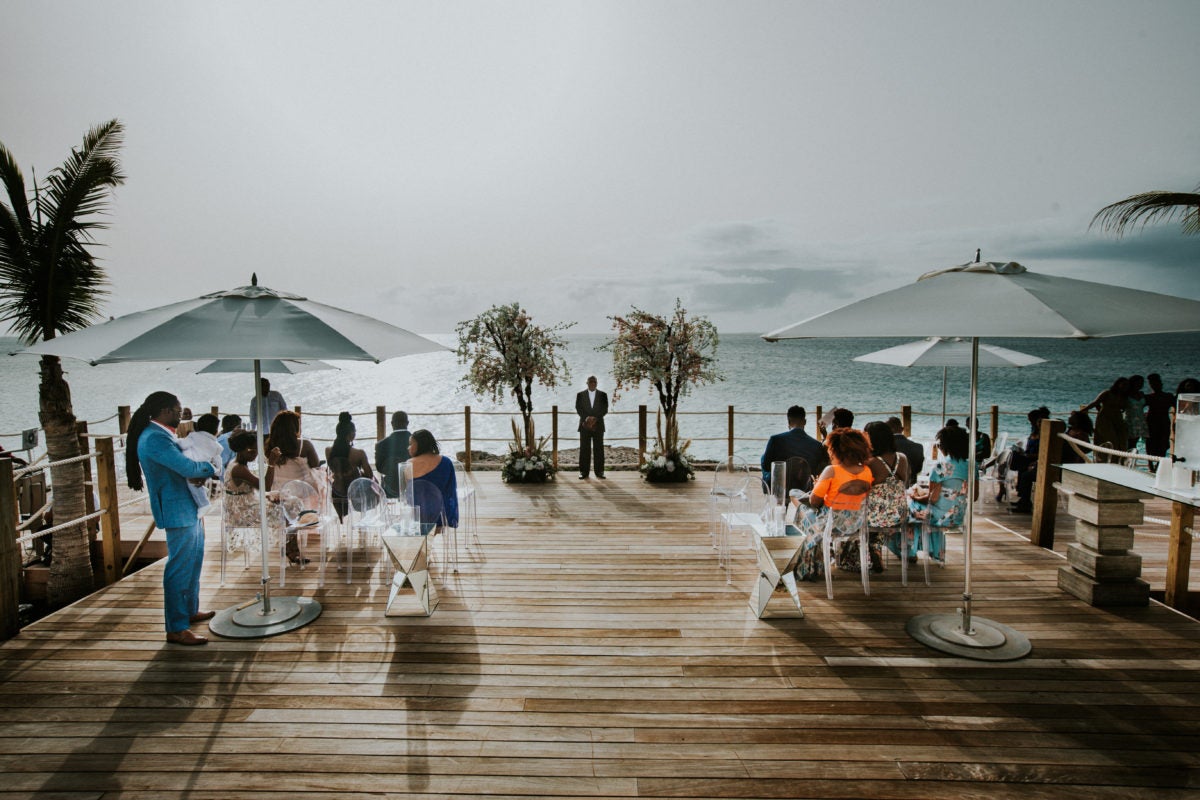 I Can See Your Halo

Herlene and her father walked down the aisle to Beyonce’s “Halo” being played by a string quartet. 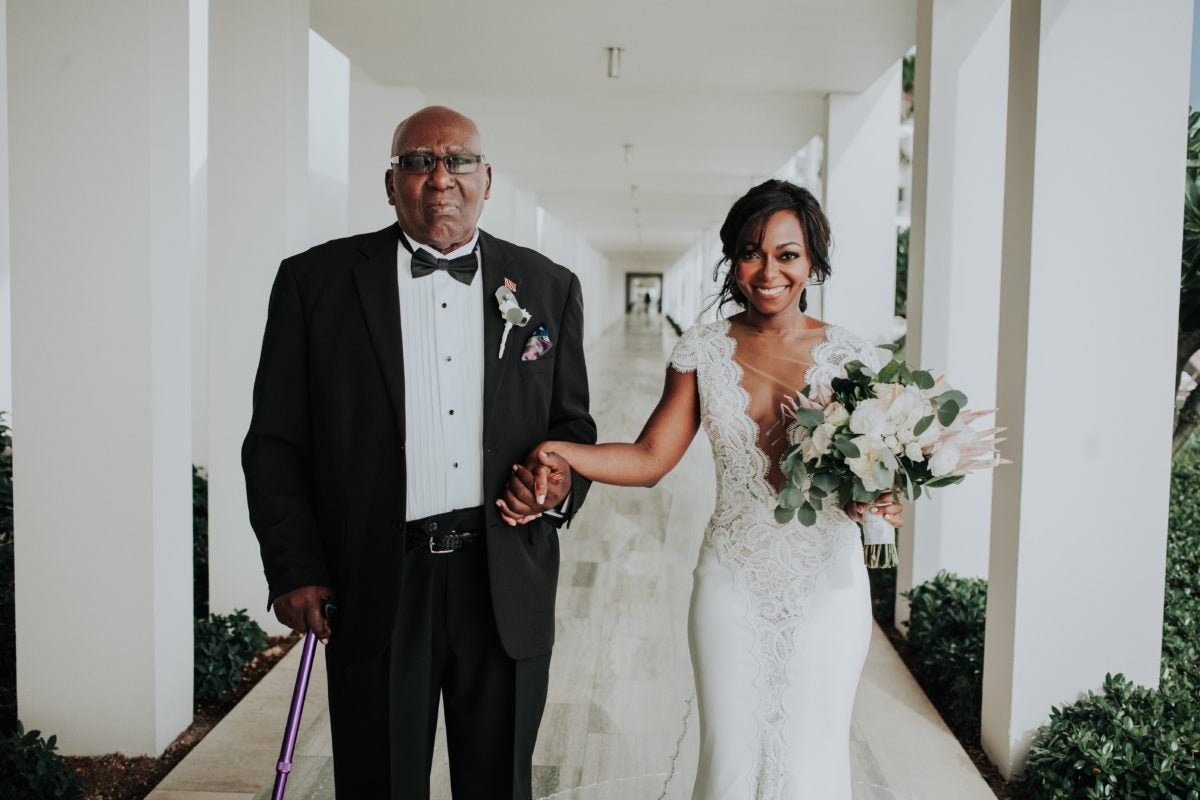 The Benjamins had a raditional religious ceremony with readings from the book of Corinthians. 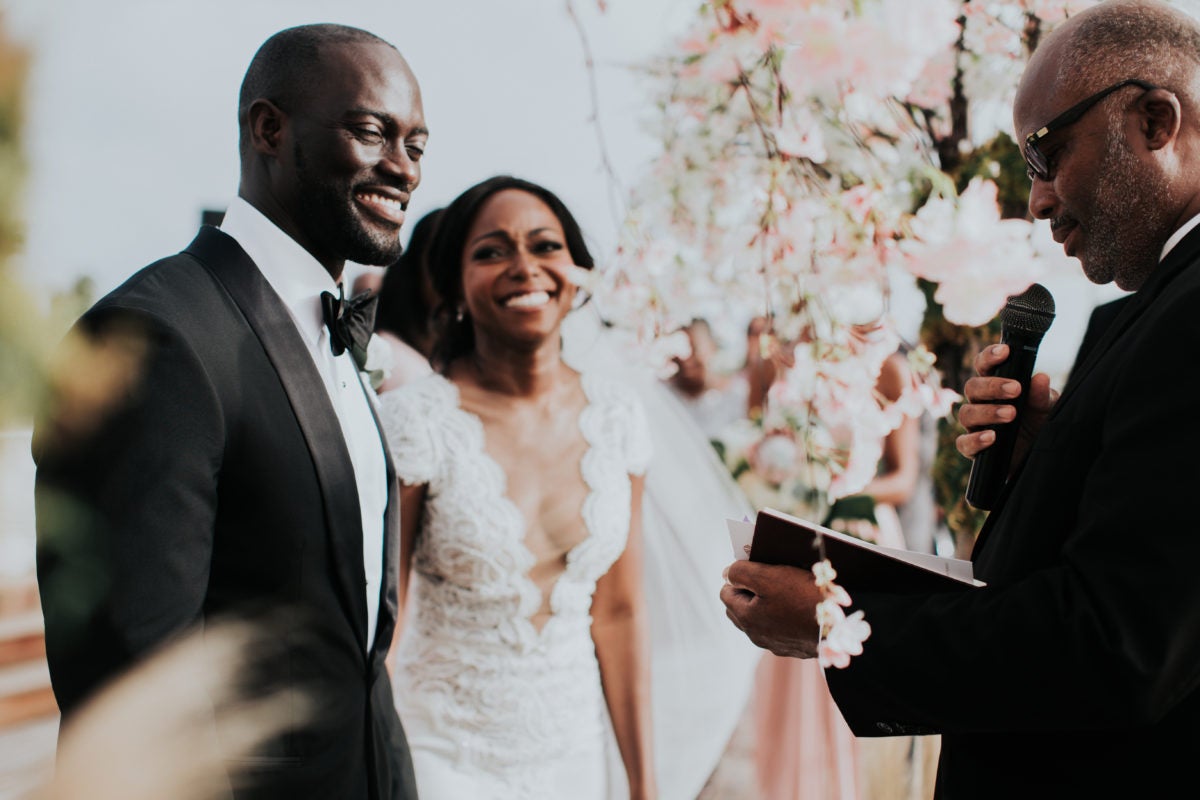 I Now Pronounce You…

The couple’s favorite part was sharing their first kiss as husband and wife under the Caribbean sun in front of their closest family and friends. 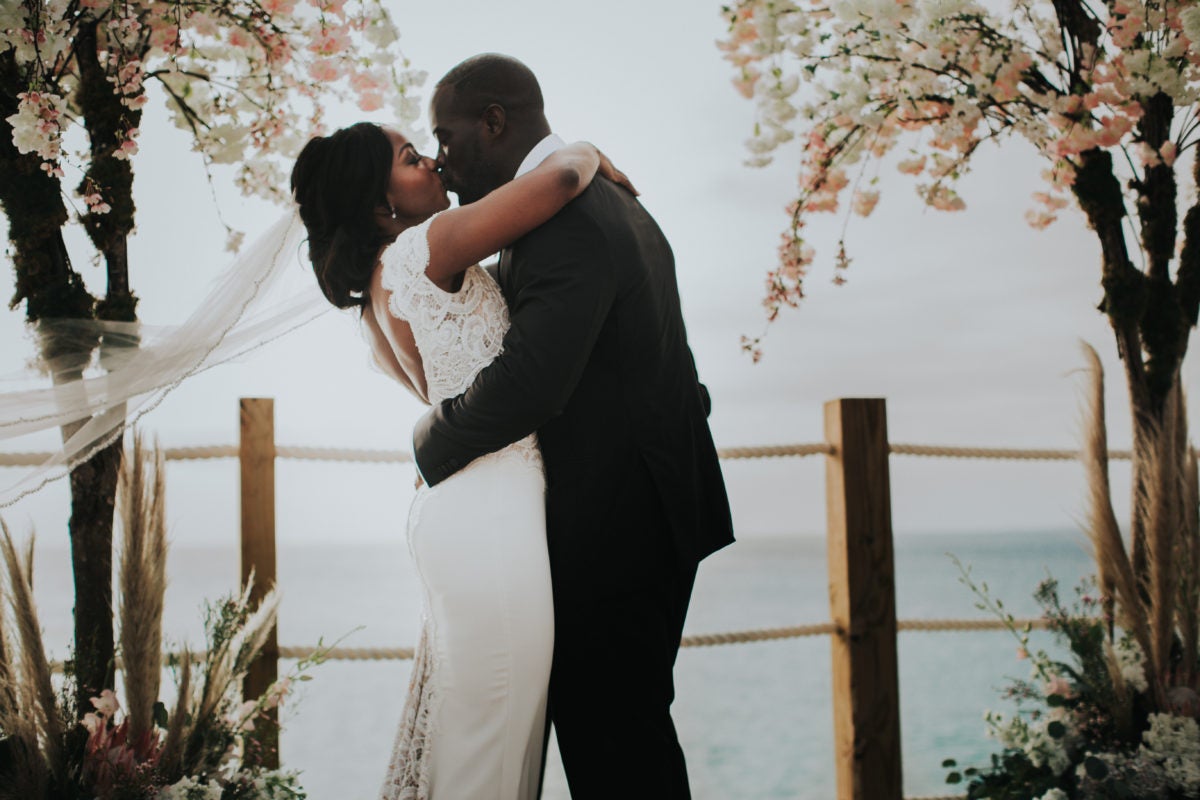 Although the devastation of Hurricane Irma fell on the island just months before their wedding, Herlene says everything fell beautifully into place by the time their wedding day rolled around. “Things always work out usually as they should and sometimes better than you ever imagined,” she says. 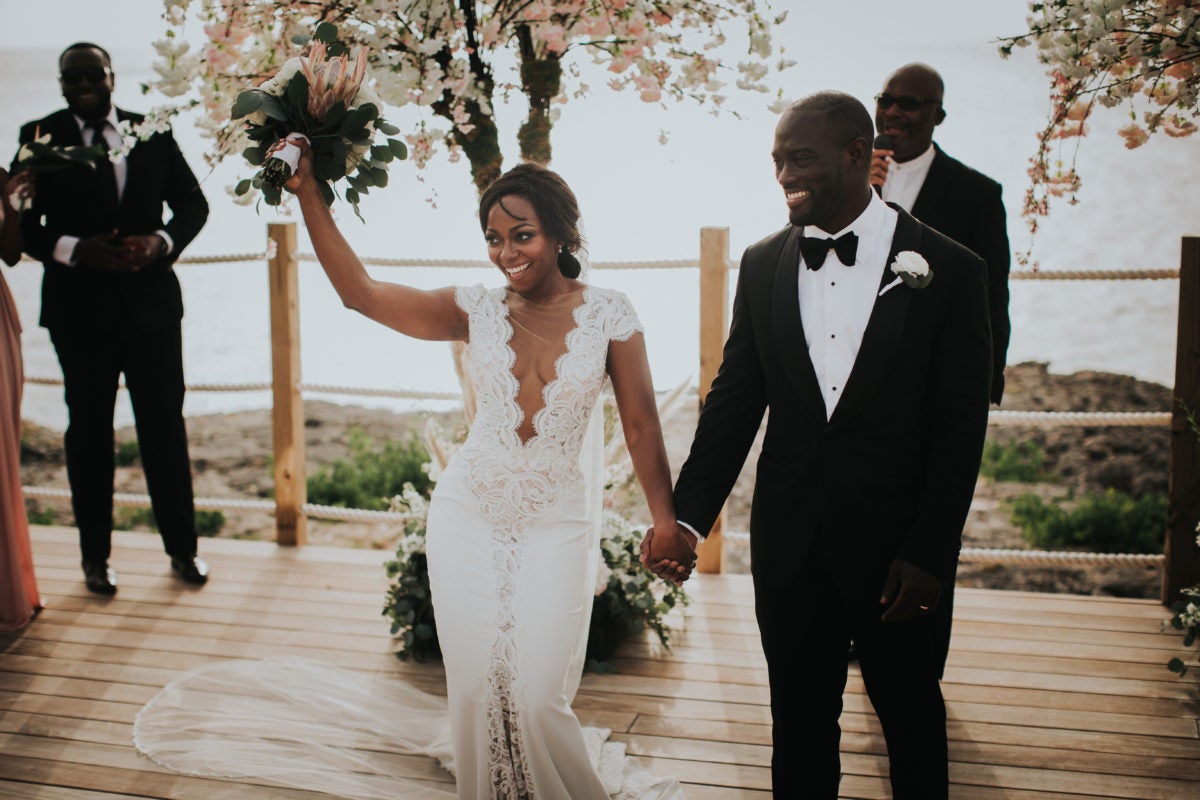 Herlene came across her wedding dress designer, Berta Balilti, on Instagram and instantly fell in love. “The models were gorgeous but looked effortless. Nothing was overdone but yet I was drawn to the beauty of the gown and their confidence. This is my vibe…beautiful & effortless.” 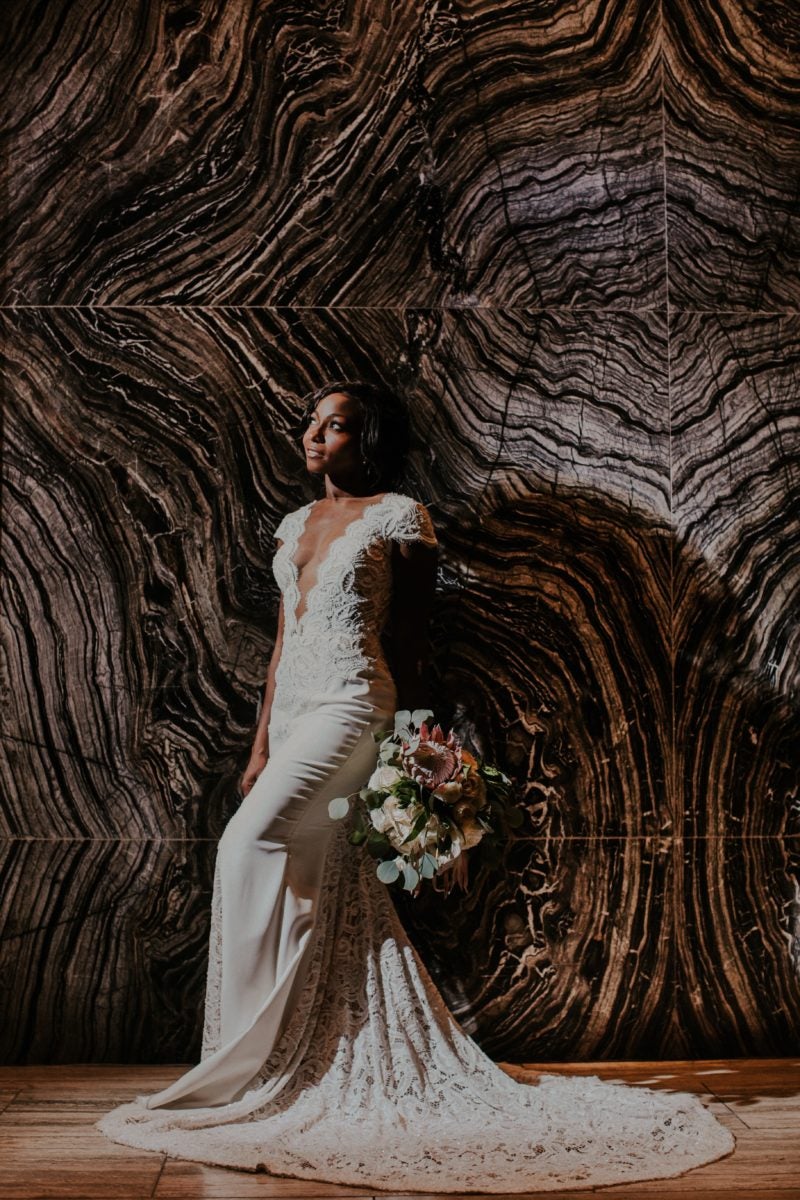 We provided the color palette and had the bridesmaids select dresses that suited their body type and made them feel confident,” says Herlene. “They chose designers Monique Lhuillier and Lois – London.” 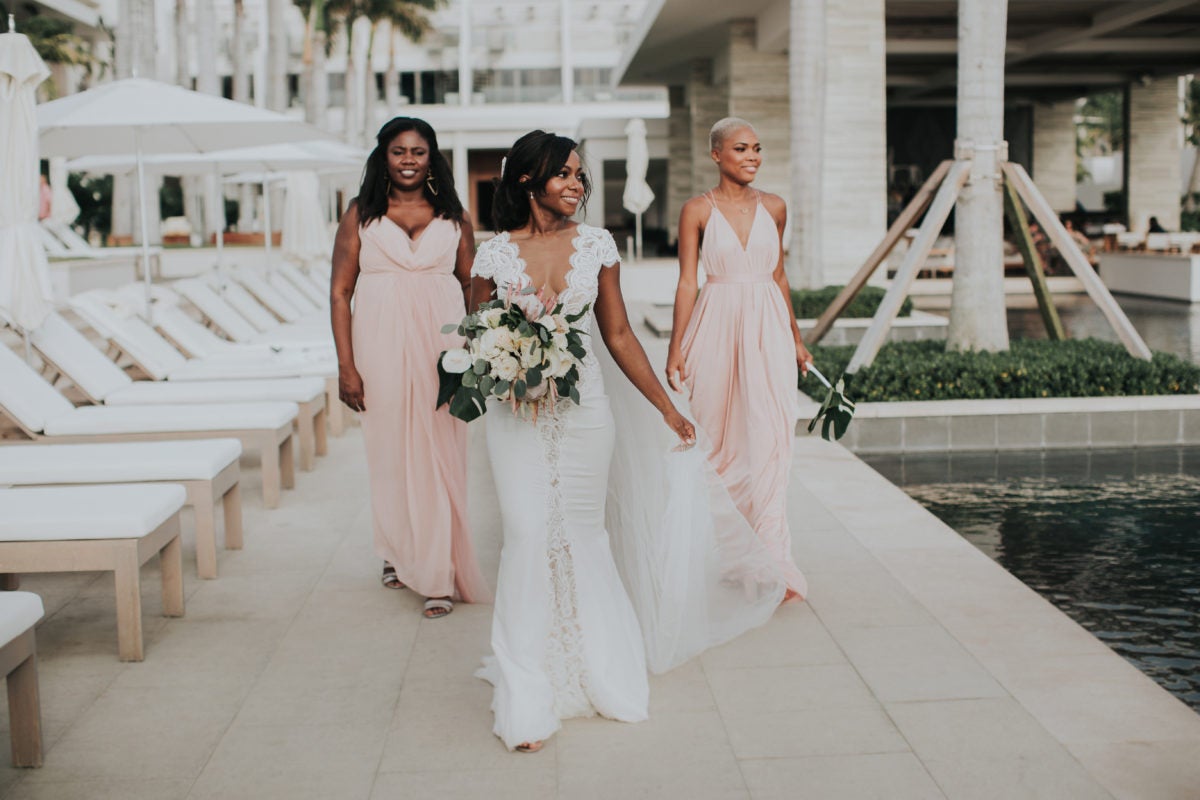 Khari and his groomsmen were outfitted in classic black and white suits for a timeless look. 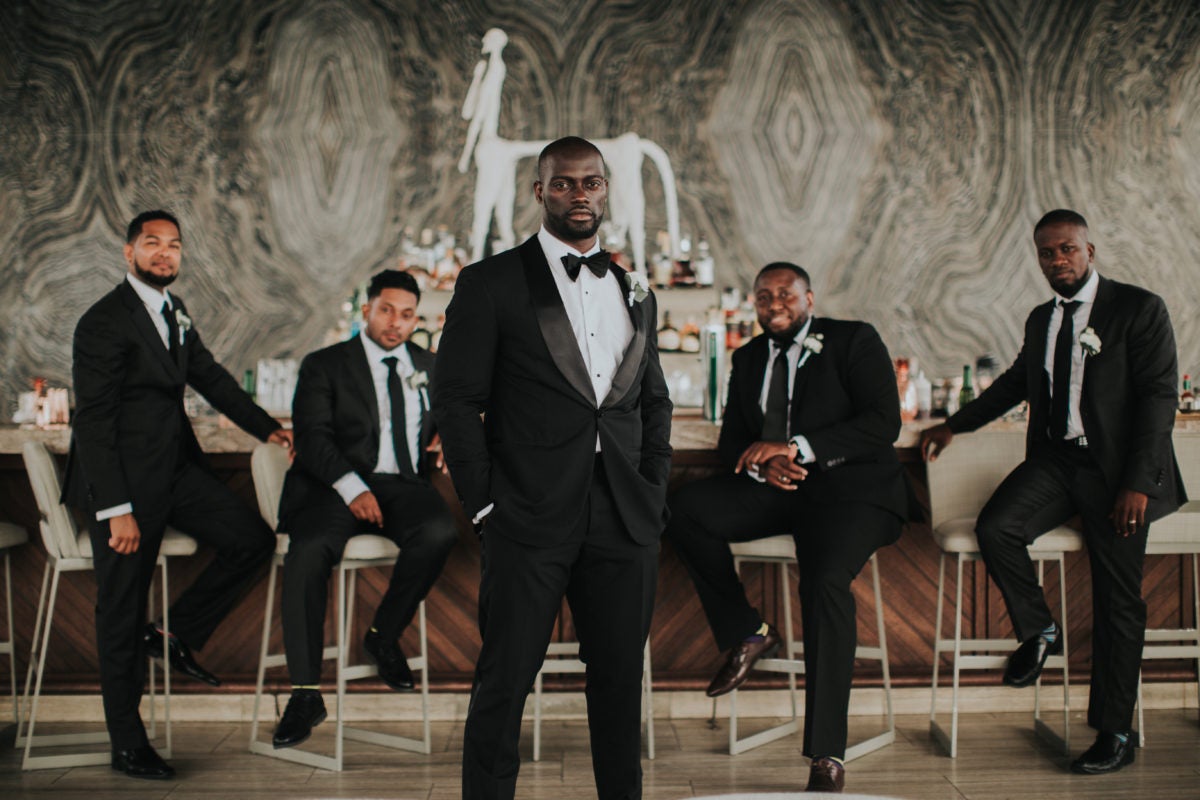 Unfortunately, the fiery sunset the Benjamins had hoped for came out in all its glory after the wedding. That’s ok, though! The photography team , Marcus & Yaisa, came through and made magic anyway. “They took our editorial direction and delivered with or without a kaleidoscopic sky,” says the couple. 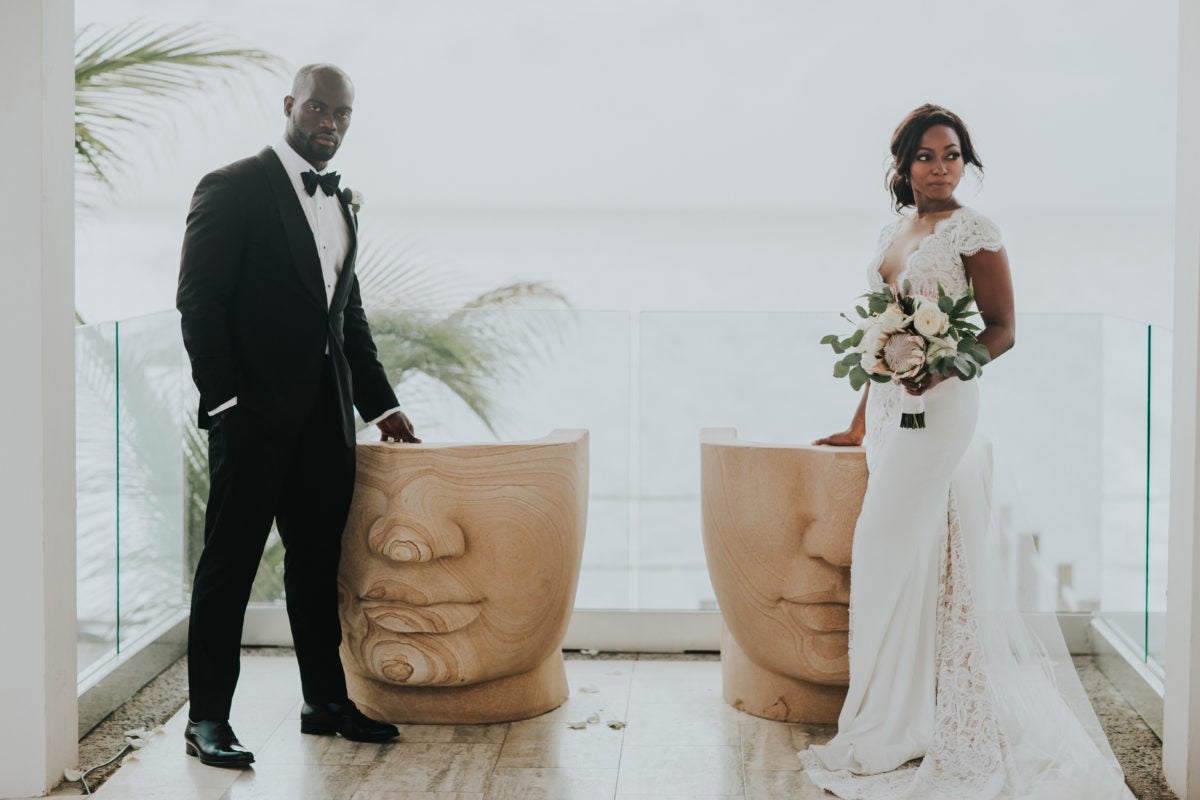 The Benjamins believe simplicity is elegance. Therefore, they kept the reception table minimal. Dinner was hosted on a long estate-style tablescape decorated with cylinder glass vases and off-white flower centerpieces. 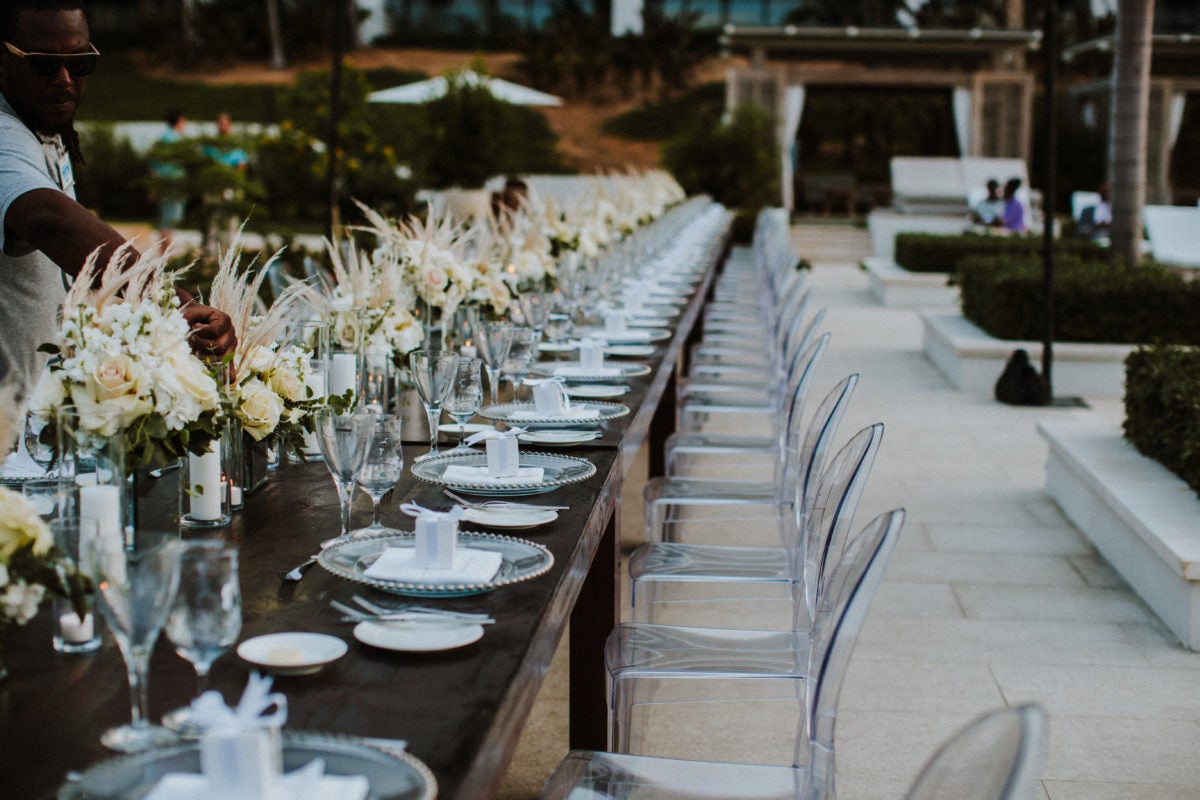 Guests dined on 3-course meal while watching the sun set. 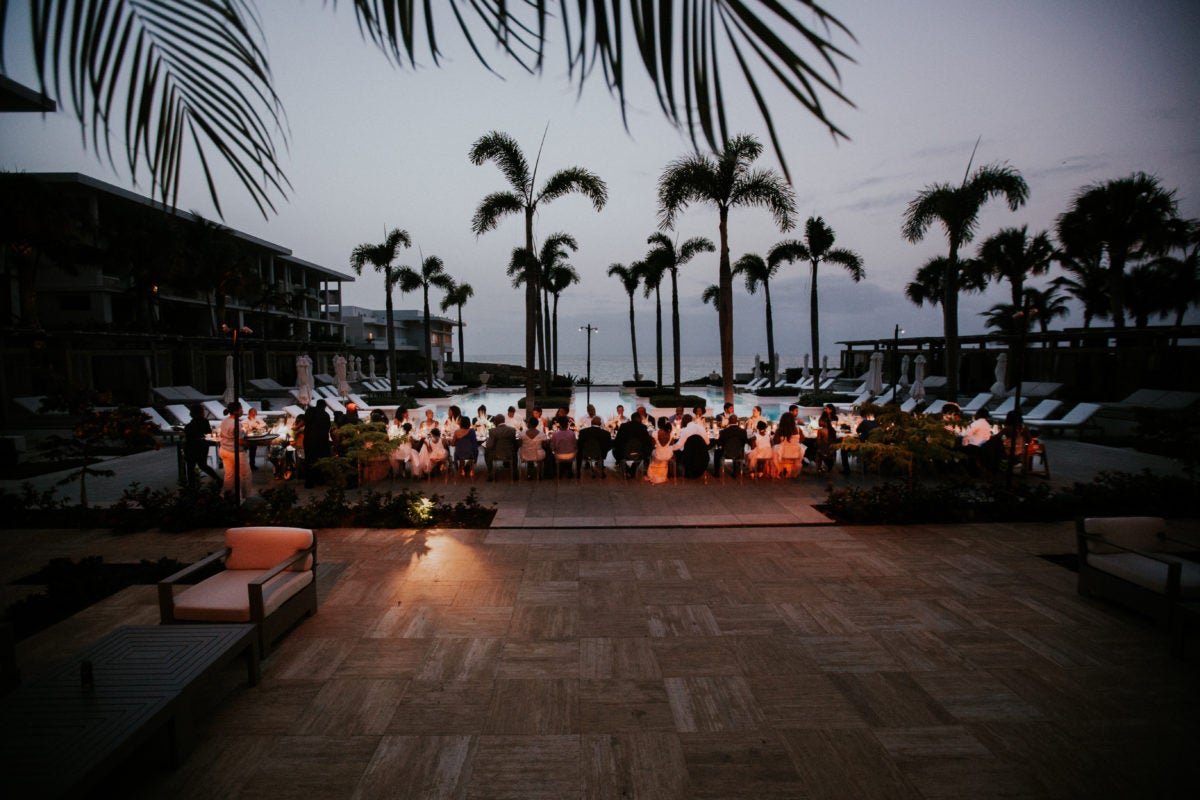 “Our cake was vanilla and chocolate with ganache filling, as recommended by the chef.” 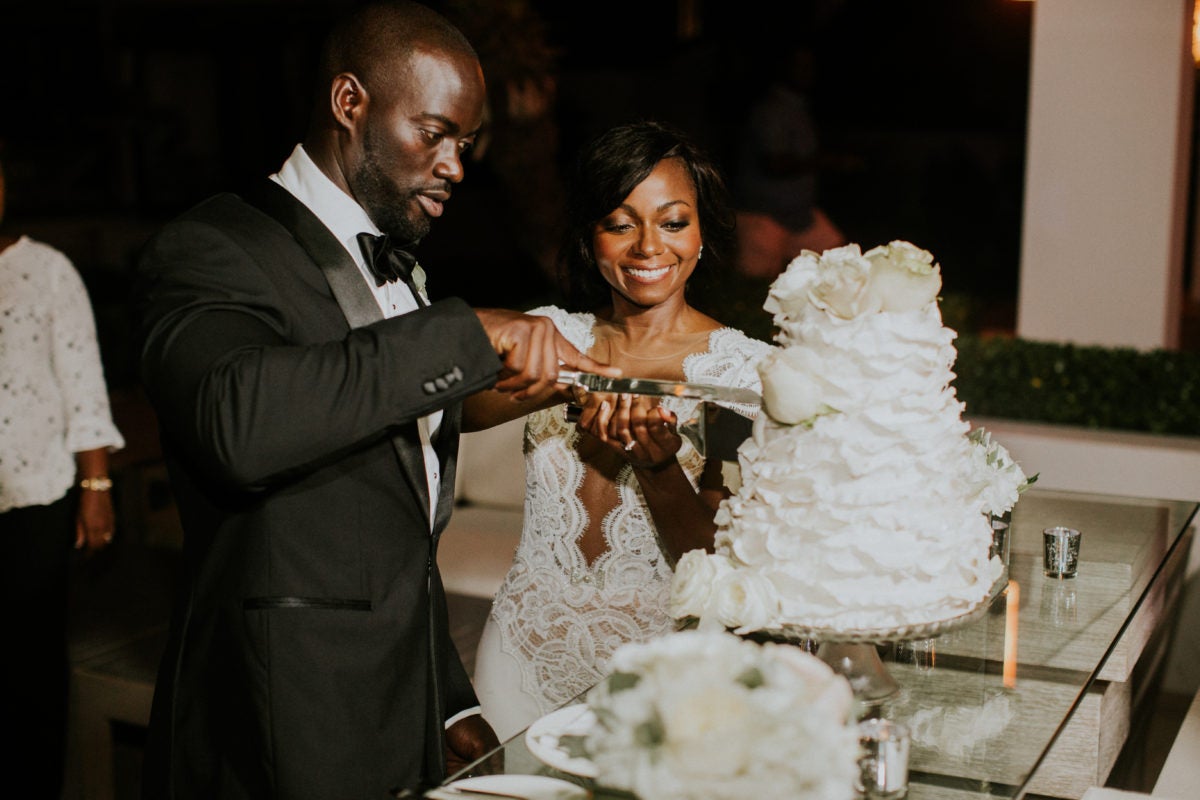 The couple’s reception space was held at the Aleta inside the Four Seasons and was outfitted with disco lights. 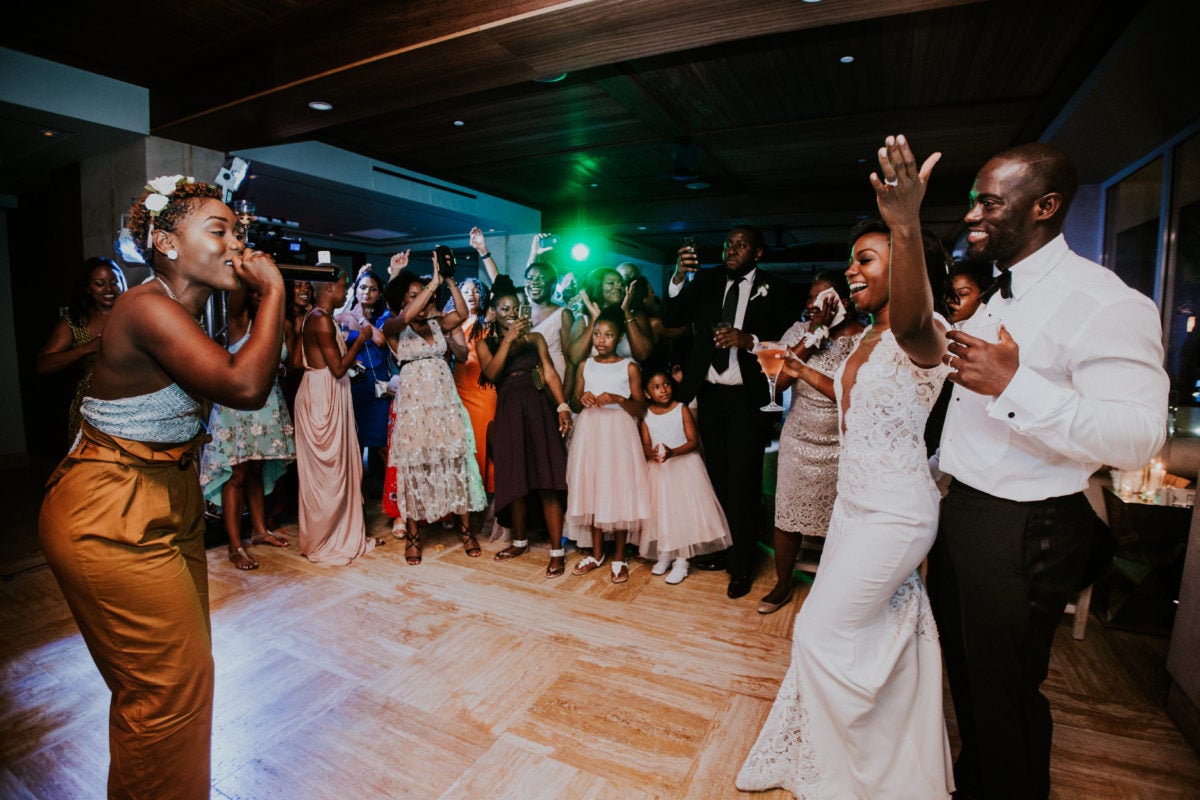 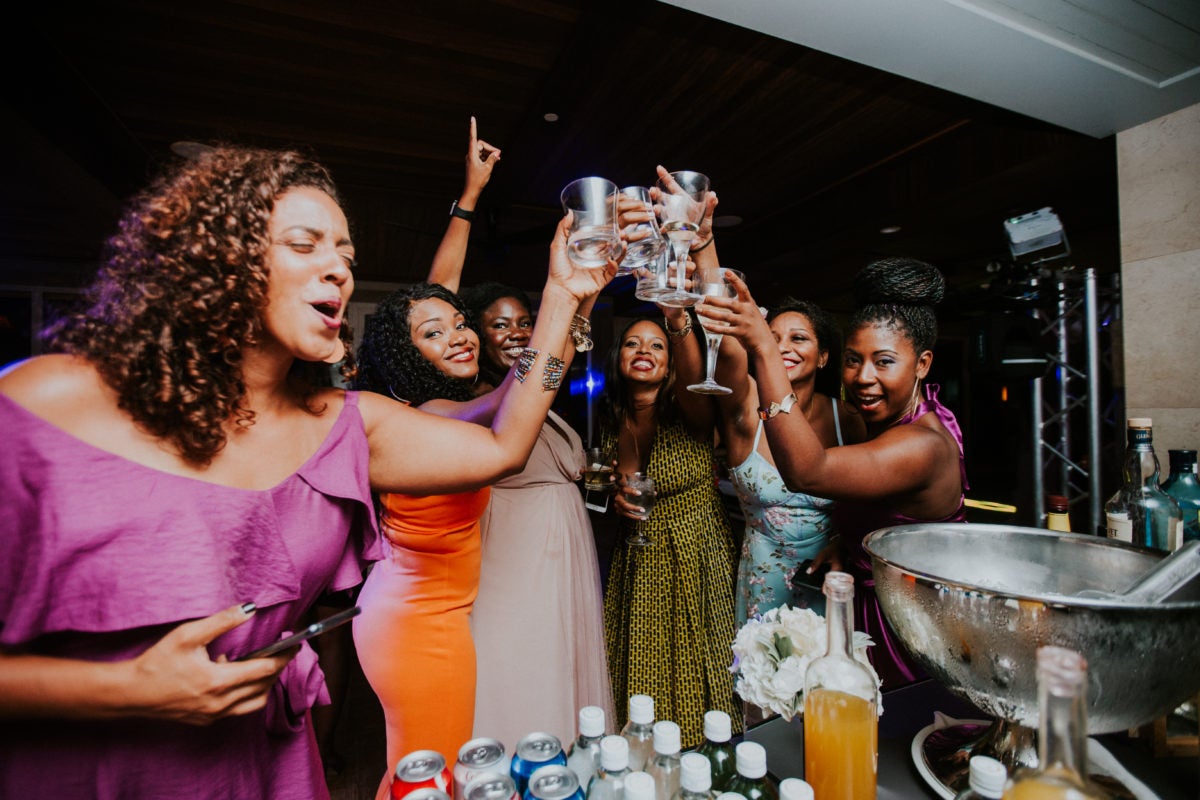 “Make sure you have a good team with you on your wedding day. Their energy and collaboration are important to keep you calm and maintaining the positive aura you need for that day.” 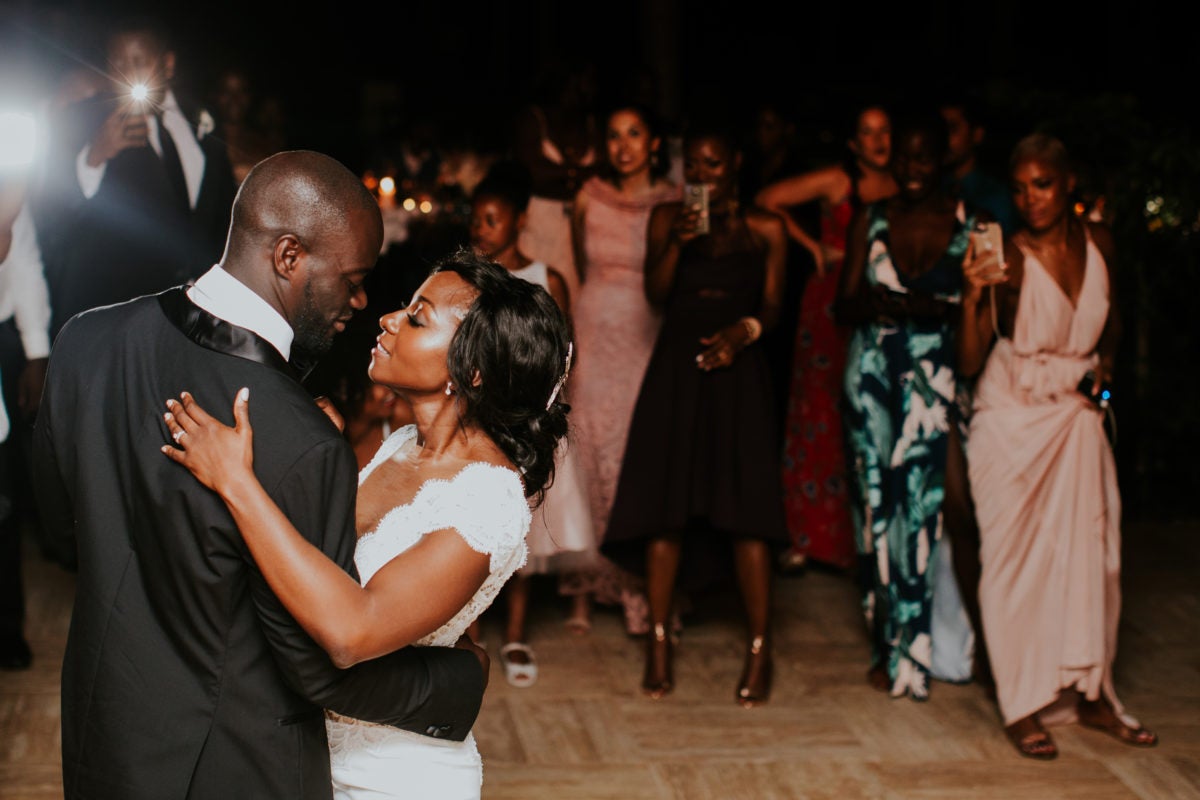 For their one year anniversary, The Benjamins will be jetting off in December 2019 on a Maldivian holiday. 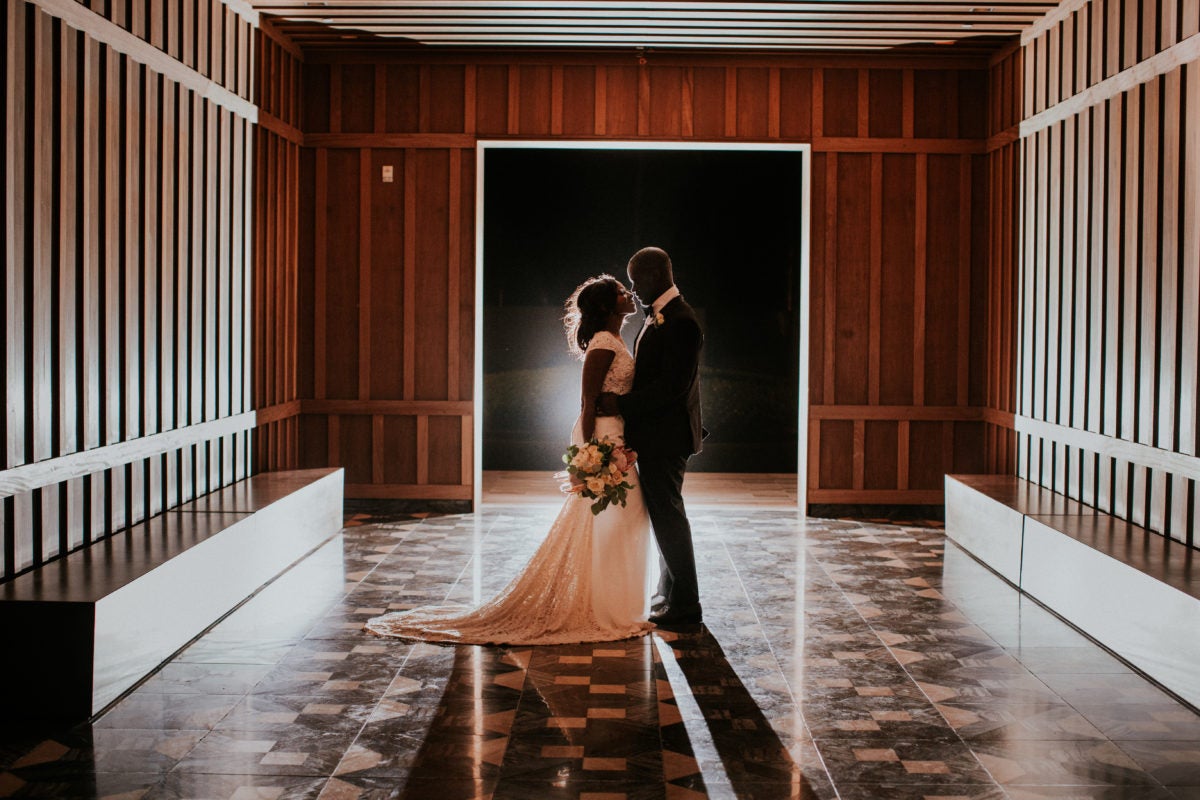