The 28-year-old Oscar winner has tied the knot with her 34-year-old beau Cooke Maroney, People confirms. The two exchanged their vows and said their “I Do’s” in front of loved ones, including an array of famous friends like Adele, Kris Jenner, Ashley Olsen, Nicole Richie, Cameron Diaz and Joel Madden to name a few.

The pair’s romantic Rhode Island wedding comes nearly eight months after Lawrence’s rep confirmed her engagement to Maroney, who works as a director at Gladstone 64, one of the Gladstone Galleries. In early February, Lawrence sparked engagement speculation when she was spotted wearing a diamond sparkler on her ring finger.

It’s been almost a year since Lawrence’s relationship with Maroney was revealed to the world. The couple was first spotted enjoying dates around New York City in early June 2018. That summer, the couple was photographed around the world, including trips to Paris and Rome.

During their trip to Italy, Lawrence and Maroney visited the Galleria Borghese, the Santa Maria degli Angeli e dei Martiri church, the ancient Baths of Diocletian and the Villa Borghese gardens, E! News confirmed at the time. 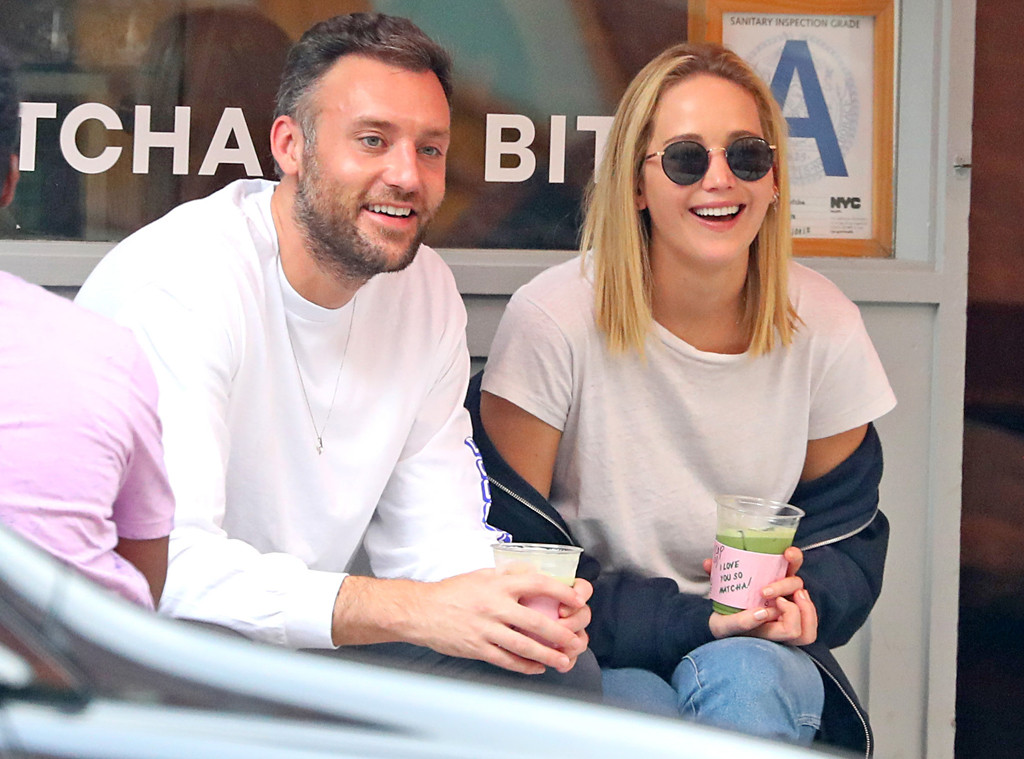 Shortly after engagement news broke in February, Lawrence was spotted out with her friends (and her massive engagement ring!) at ABC Cocina in NYC.

“They shared several different dishes and seemed to really enjoy themselves,” a source told E! News in late February. “Jennifer wore her engagement ring and it was very noticeable and sparkly. She was smiling and laughing throughout the meal. It was clear she’s very happy and was having a great night.” 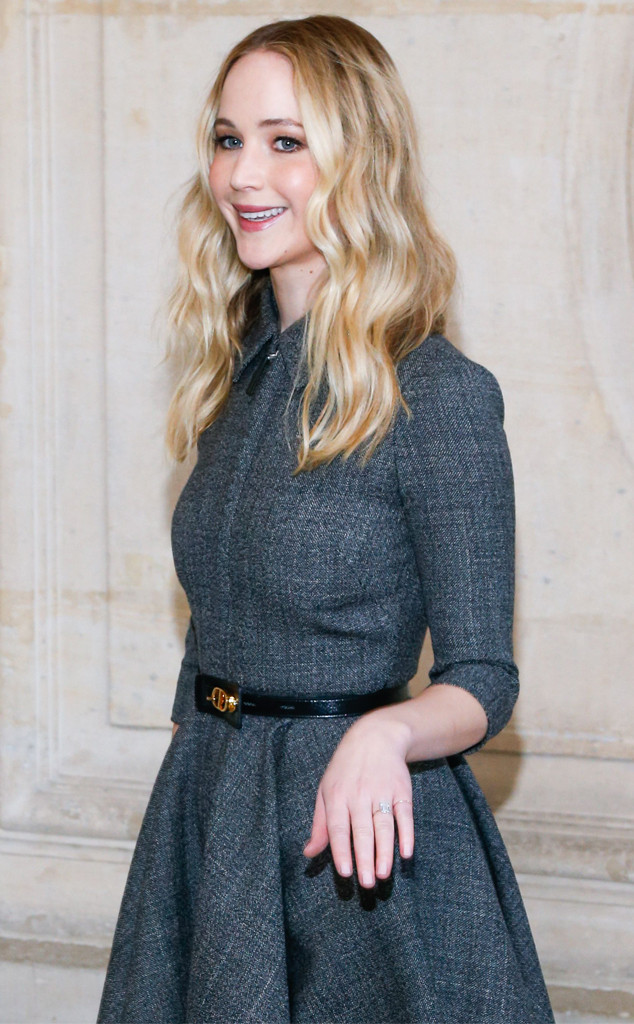 She then made her first public appearance since her engagement at Dior’s Paris Fashion Week show. While posing for photos, Lawrence held out her hand for photographers, giving everyone a close-up shot of her gorgeous ring. 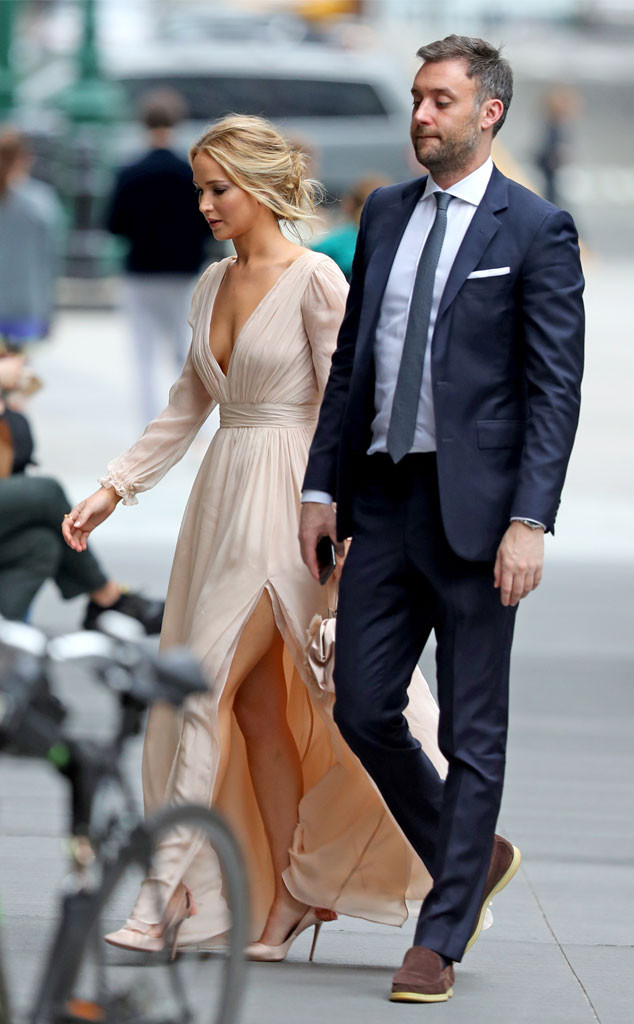 In mid-May, Lawrence and Maroney celebrated their love with a low-key engagement party. Following the celebration, stylists Jill Lincoln and Jordan Johnson posted a photo of a smiling Lawrence in her stunning pink-peach dress by L. Wells Bridal.

“Here she comes! We couldn’t be happier and more excited for #jenniferlawrence to become a #MRS.. this weekend we toasted Jen and her groom to be.. too good of a time was had by all,” the duo captioned the Instagram post. 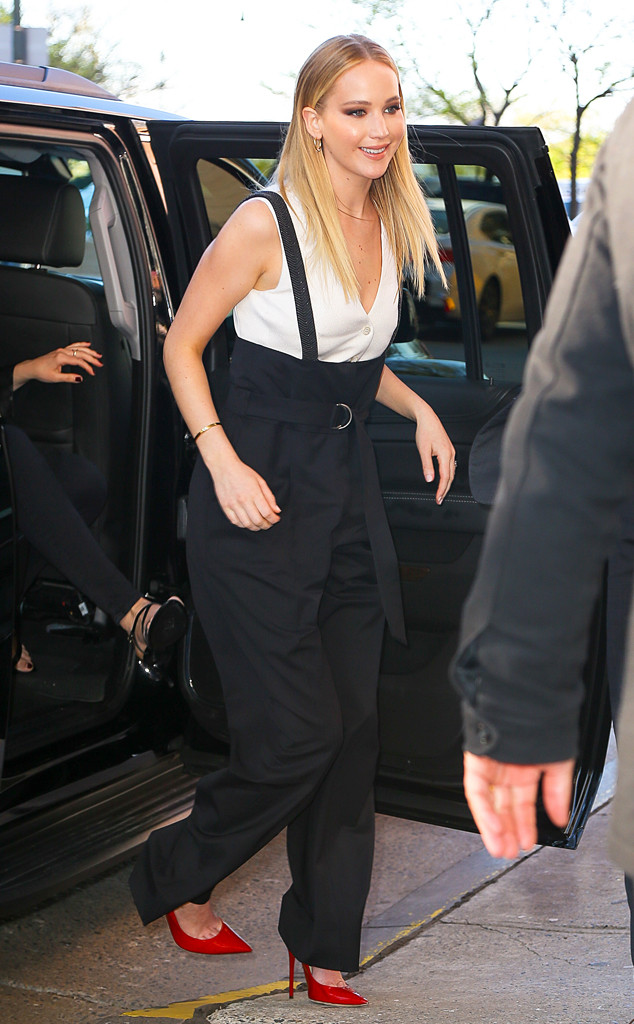 Prior to her relationship with Maroney, Lawrence previously dated director Darren Aronofsky as well as her X-Men co-star Nicholas Hoult. During a recent interview with Elle, Hoult opened up about working with his ex.

“It’s like going back to school after the summer holidays,” Hoult said about reuniting on the X-Men franchise’s latest film, Dark Phoenix. “The reality of [the X-Men franchise] is there are lots of characters, so everyone was together for brief periods, but not every day for four months.”

Congratulations to Lawrence and Maroney on the exciting wedding news!

Don’t miss E! News every weeknight at 7, only on E!

Romantic Honeymoons on the Horizon