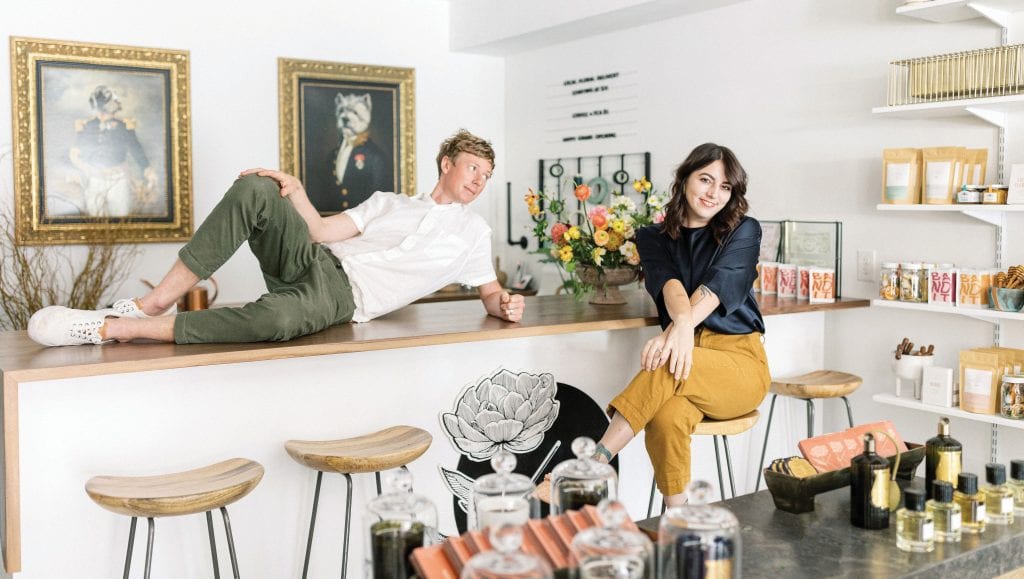 Melissa and Sean Stevenson pose in their new 1,000-square-foot shop, Kaleidoscope Home, on Fifth Avenue South in Naples. The couple built a name for themselves designing floral arrangements inspired by nature for events and weddings in Southwest Florida and beyond. COURTESY KALEIDOSCOPE FLORAL / KAITY BRAWLEY

PICK ANY ITEM OFF THE SHELF AT KAleidoscope Home, and Melissa Stevenson will likely tell you it was made right here in Southwest Florida. Take, for instance, the handmade greeting cards by local artist Bridey Lee. Or the dozens of planters, soap dishes and bowls made custom by Naples pottery company Clay More Ceramics. There are leather bags fishing guide Casey Lee whipped up, tote bags that were designed and printed by Marty Walsh of Skunk Ape Print and clay earrings by Half Sister in Fort Myers. If an item wasn’t made nearby, Mrs. Stevenson can still rattle off who crafted the hand-molded tapered candles, the wildflower honey or the hand-woven cotton throws.

“Everything is handcrafted; it’s not stuff you can find on Amazon,” Mrs. Stevenson said.

The new home goods store along Fifth Avenue South is equal parts local handmade goods and exotic flowers from places like South America, Holland, Africa and Italy. And the aesthetic is similar to that of worldwide retailer Anthropologie, but on a more intimate level. The shop is the brainchild of husband and wife team Sean and Melissa Stevenson, with financial backing from none other than the Hoffmann family. The shop opened at 321 Fifth Avenue South on Oct. 1. 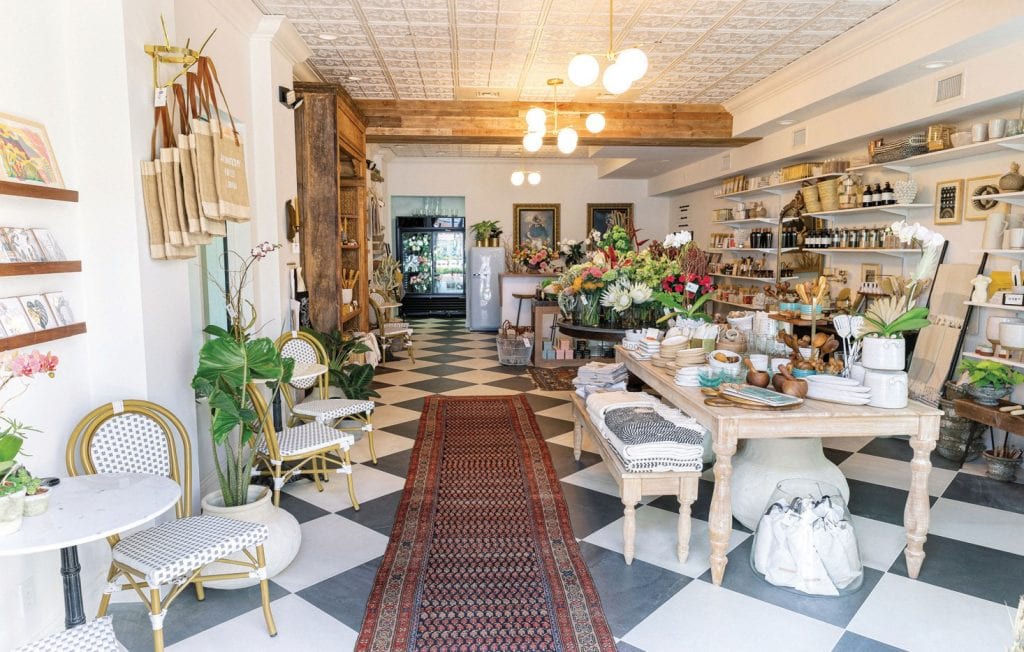 Above: Melissa Stevenson had just six months to curate a collection of handmade goods from both local and international artists. Kaleidoscope Home sells everything from handmade stationery and earrings from Southwest Florida to hand-poured candles made in France. The shop at 321 5th Avenue S. opened Oct. 1. PHOTOS COURTESY KALEIDOSCOPE FLORAL / KAITY BRAWLEO

Mr. Stevenson started working at a florist in high school, at a shop down the street where he grew up. It was his fallback job when his band, Fake Problems, returned from a tour a few years later. Mr. Stevenson worked at a restaurant for one whole day before he returned to the florist a third time.

“Around that time I started getting into the design of stuff,” Mr. Stevenson said. “I was getting a lot of inspiration from the internet and finding a whole new world of what floral design could be, so I went and started working next door.”

Mr. Stevenson moved to a competing floral shop, and after a time there, Mrs. Stevenson suggested they go into business themselves.

“Flowers are luxury items, and knowing people have expendable cash, we knew this was a place where this could work,” Mr. Stevenson said. “And from the beginning our style was different than the other stuff out there.” 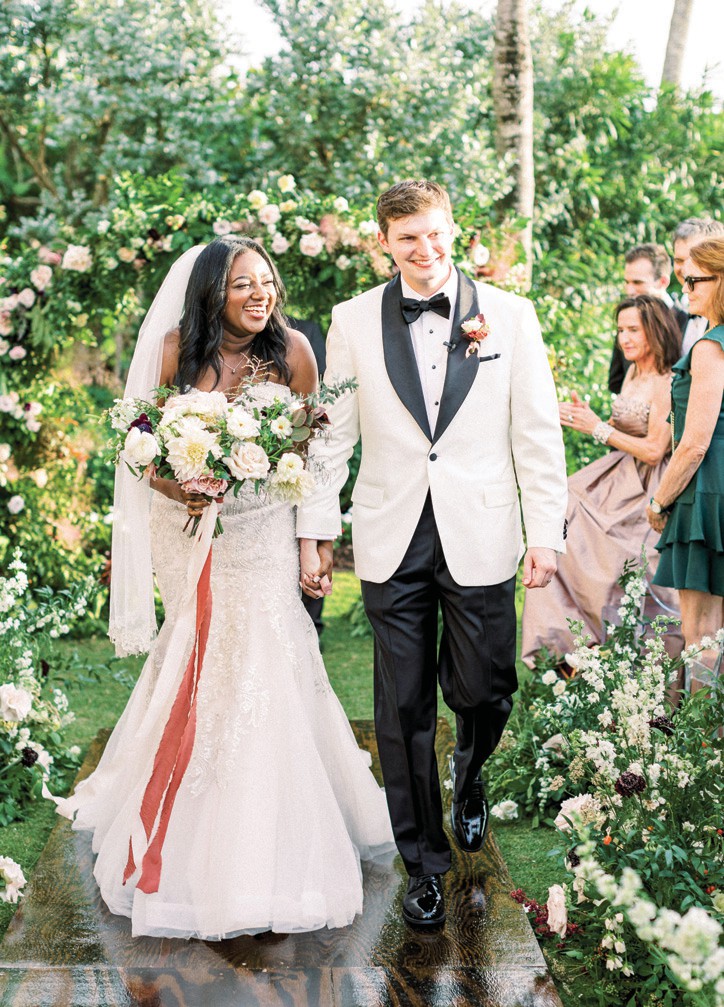 Right: Charnele and Joe Dernback say “I do,” surrounded by floral installations created by Kaleidoscope Floral.

They wanted more freedom to express their own style and by then understood the business behind the work. They booked a friend’s wedding first, and gained traction on social media.

“We started it ourselves in our living room as a sole proprietorship,” Mrs. Stevenson said.

Mr. Stevenson does the arrangements still, while Mrs. Stevenson handles the business side of things, booking events, maintaining the finances and interacting with clients.

They launched Kaleidoscope Floral in a studio space on Solano Road in Naples right before Hurricane Irma hit and began consulting and designing for elaborate events. Soon, they had an Instagram following and brides from across the country were calling on them for their untamed style: cascading floral installations suspended from ceilings with imported flowers not found on this side of the Pacific.

Kaleidoscope Floral seemed to reach its fever pitch this past summer, when the Stevensons traveled to France to work on the wedding for boy band singer Joe Jonas and his then fiancé Sophie Turner of “Game of Thrones” lore. The Stevensons were tight-lipped on the affair, having signed a major non-disclosure agreement. But suffice it to say, this was the big time.

At least until they announced their latest venture: a brick-and-mortar store along Fifth Avenue South, the thoroughfare with perhaps the most expensive overhead in the county. The leap was made possible by a recent partnership with the Hoffmann family, investors with ties in St. Louis, Mo., who have snapped up properties and businesses including everything from the Naples Princess to Hertz Arena and the Everblades hockey team to Adelheidi’s organic sweets along Fifth Avenue South, among many others.

The Stevensons had far-off dreams for how to expand their floral studio. They wanted to sell home goods and daily bouquets for dinner parties and the like. Something for a customer who wasn’t necessarily throwing a wedding but still looking for flowers for a special event or for a dim corner of their home.

When the Hoffmanns reached out to the Stevensons, the couple admitted they were skeptical at first. Mrs. Stevenson didn’t even attend the first meeting with Hoffmann Commercial Real Estate, so set as she was on refusing their offer.

“When they approached us to buy, we weren’t really interested,” Mr. Stevenson said.

“It was very serendipitous. There was a business idea I had, and they said hold on one second and came back from another room with the same blueprints,” Mr. Stevenson said.

Mr. Stevenson left the meeting that day excited about the potential, and while the Hoffmanns were eager to open a shop up immediately, the Stevensons instead set an opening date of Oct. 1.

That gave Mrs. Stevenson enough time to curate a collection of handmade goods from artists across Florida and beyond.

Choosing each item was important to the overall vibe in the store, Mr. Stevenson said. Which is why Kaleidoscope Home is selling $100 Cire Trudon candles, made by the Paris-based and oldest wax-producing factory the world over, instead of something more generic.

“Retail has changed so much with the internet, so for a brick-and-mortar store to survive it has to make you feel a certain way,” Mr. Stevenson said. “Everything in this store is something I would like to have myself.”

Customers can build their own bouquets at the floral bar or get help from one of the designers on staff. You can buy potted plants, too, and their plant expert Kyle Hook can tell you how to care for just about anything.

So what started as a part-time job for Mr. Stevenson, 33, turned into a full-time entrepreneurial adventure thanks to his wife’s urging and partnership. Just a few years later, and the duo has launched what they hope will become a mainstay along Fifth Avenue South. It’s all part of a bigger plan of helping successful Naples businesses stay that way, according to David Hoffmann, chairman of Hoffmann Commercial Real Estate.

The father-son team set its sights on Naples after vacationing in Naples as a family over the years and selected it as an investment opportunity the same way they chose others.

Mr. Hoffmann said they came across Kaleidoscope Floral after seeing their work at events around town.

Mr. Hoffmann has said he wants Naples to become the Disney World for adults, a vision he defines as a place where adults attend events and parties and get to partake in activities geared toward their demographic. That could include a high-end dinner or putt-putting with the grandkids. Hoffmann Commercial Real Estate owns two courses in Naples.

Kaleidoscope Home fits in because those parties and events usually need floral arrangements. Plus, when you visit the shop along Fifth Avenue, you can make your own bouquet on the spot.

When it comes to the shop itself, Mr. Hoffmann said his company has been hands off as it has been for its other investments.

“We saw their shop and work, and we were really impressed,” he said of the floral business. “We had zero input on the new store. We just let them run. We’ve gotten rave reviews from people already.” ¦