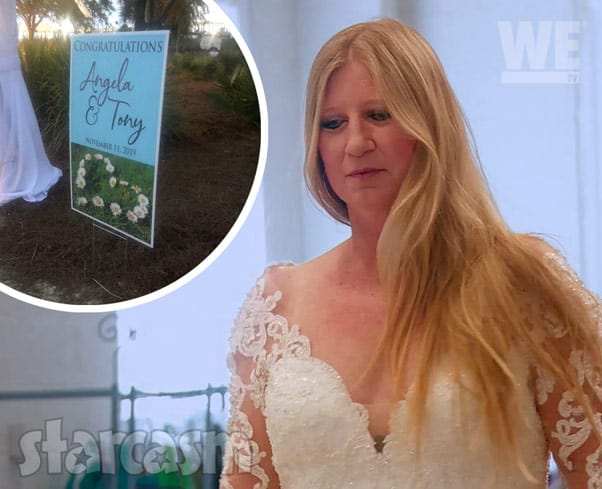 Congratulations are apparently in order for Love After Lockup stars Angela and Tony as they appear to have officially gotten married in Mississippi earlier this week! (I guess that would be Mrsissippi now?)

News of the wedding was first reported by a redditor who happened upon the couple’s beach ceremony. U/lovelesschristine posted a photo of a sign that reads “CONGRATULATIONS Angela and Tony” along with a heart made of flowers and the date November 11, 2019. “Passed by a wedding today in Mississippi” was the title of the post, and the OP followed up with some more information in the comments, confirming that it was Angela and Tony from the show.

“The other side says Love After Lockup,” she revealed. “The wedding looked quite nice. Which is surprising.”

The redditor says she tried to be sneaky and get some additional photos, but “they had lots of filming [crew] and security.” She also revealed that the ceremony took place on a beach.

Everything about the post seemed completely believable, albeit quite surprising, but I really wanted to have some sort of proof.

After doing some extensive records searches in Mississippi, I can exclusively reveal that Angela and Tony filed for a marriage license in Grenada County on October 25 of this year! There is currently no record of the marriage certificate being filed, but that would make sense if the couple were out of town for the wedding and/or honeymoon.

Despite Angela and Tony ending up together on the show, marrying so soon will be a shock to numerous viewers (like me) who are aware of how little time the two have actually spent together. As we previously reported, Tony wasn’t officially released from the custody of his most recent halfway house until August of this year!

Well, there is one other obvious question: Were wedding attendees given a meal choice between steak or, ummm… 😉

UPDATE – I’ve seen numerous mentions online about leaked photos from the wedding being posted in a private Facebook group. I haven’t been able to track down any of those images, but I’m certainly keeping my eyes peeled and my inboxes open!