A police officer who was forced to cancel his wedding following lifesaving brain surgery has slammed a Grade II-listed hotel for refusing to give him a refund.

Jordan Miller, 26, had a hemorrhagic stroke just six weeks before he was due to celebrate marrying his fiancée Alex Harrison, 26, at The Croft Hotel in Darlington.

The father-of-one had to undergo emergency surgery after suffering a bleed on the brain and was left with brain damage and epilepsy.

During his recovery, Mr Miller had to relearn how to complete basic tasks such as walking, talking and eating with a knife and fork. 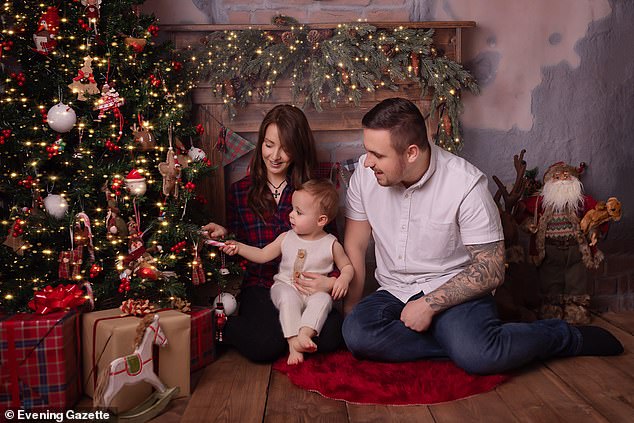 Jordan Miller, 26, pictured with his fiancée Alex Harrison, 26, and their son Archie

Ms Harrison, who works in business admin, pushed their wedding plans aside and concentrated on getting Jordan back to full health, as reported by TeesideLive.

The couple, who are parents to two-year-old Archie, later asked the hotel for the £2,500 which they paid for their reception to be returned to them.

However, they said they were refused a refund by the hotel, which was run by Best Western, as the big day had already passed.

Owner of the hotel Mike Baldry said he had ‘every sympathy’ with Mr Miller, but that they took over the business on 15th June 2019 and the issue occurred in June 2018.

He added that they had nothing to do with the business when Mr Miller booked or cancelled his wedding and they are not holding onto his money.

Mr Miller said that they were offered another date but, due to his injuries, he decided that he no longer wanted a big wedding.

Mr Miller, from Eaglescliffe, Stockton, said: ‘I feel like they have made everything harder for us. They haven’t been very sympathetic. 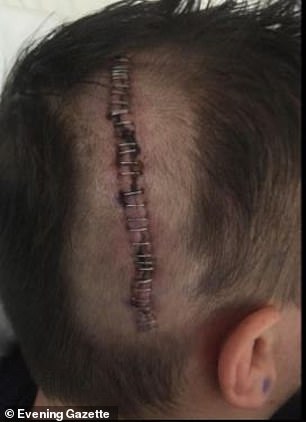 ‘I have been left with a brain injury and epilepsy. I don’t do well with big crowds and I don’t think I can have a big wedding anymore.

‘I wasn’t working and my missus was only working part time. We decided we were better off having the money back.

‘We had booked all of the rooms in the hotel that day but I saw that they had sold some of the rooms.

‘They basically said unless you want to get married here you’re not getting it back.’

Mr Miller, who works for Cleveland Police, proposed to his partner of six years Alex while on-board the Sunborn yacht hotel in London.

He said he got the romantic idea from Alex’s favourite film The Parent Trap, in which the twin girls’ parents tie the knot on the Queen Elizabeth 2 ocean liner.

The couple, who did not have wedding insurance, planned to get married at the Church of St Martin in Kirklevington, Yarm, on May 27, 2018 and hold their reception at The Croft Hotel.

Mr Miller said that he paid the hotel £2,500 but did not sign a contract.

Six weeks before the big day, Jordan, then 24, fell ill while at Bannatyne’s gym in Ingleby Barwick, Stockton.

He said: ‘I picked up the weights and I got this massive headache. My left side of my body just completely went, I couldn’t feel it at all. I knew something wasn’t right. 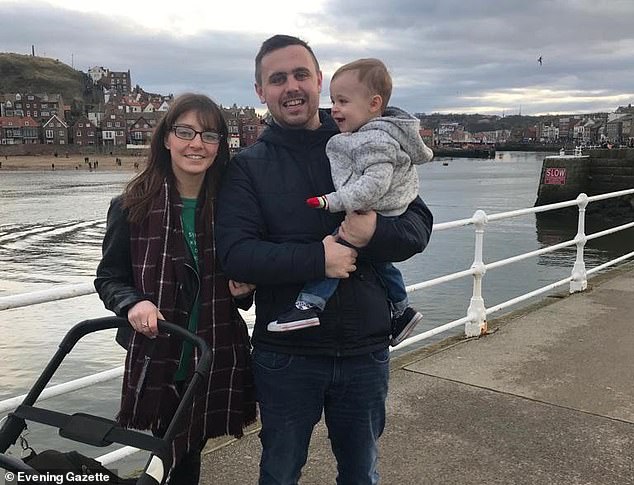 The couple, who did not have wedding insurance, planned to get married at the Church of St Martin in Kirklevington, Yarm, on May 27, 2018 and hold their reception at The Croft Hotel

‘I managed to go downstairs. I stood behind the reception desk said ‘ring the ambulance, I’m not very well’.

‘I kept being sick. I was lying on the floor and I was going in and out of conciousness.

‘They asked if I could get on the chair. I tried to do it but I couldn’t move my head or legs.’

‘I had brain surgery and I remember waking up and thinking ‘what has happened here?’,’ he said.

‘When I found out I had had a stroke I was gutted.

Mr Miller discovered that he had been born with a condition called arteriovenous malformation (AVM), which had caused the stroke on April 9 last year.

AVM is an abnormal connection between an artery – carrying blood from the heart to the body – and a vein.

Mr Miller said the stoke left him walking like a crab and struggling to hold a conversation.

He added: ‘I had to spend the next year or so recovering. It was like being a toddler again.

‘I had to learn how to talk properly and eat with my knife and fork.

‘I have feeling back in my left side now but I have been left with damage to the brain.

‘I won’t be able to be a frontline officer anymore. I have skipped the frontline and gone straight into CID.’

Mr Miller said that they expected to lose deposits on the services which they had booked for the wedding, however they did not expect the hotel to be so unhelpful.

He said that he was told by Best Western that the hotel is run by a separate management company.

He said: ‘When I was well enough I started to try and get my money back for the wedding.

‘Everyone was really good, the florist was lovely. The hotel aren’t interested.’

Owner of the hotel Mike Baldry said: ‘I have every sympathy with Mr Miller and agree he had been shabbily treated – if we had been the business owners concerned with this we would have acted differently and with a lot more sympathy.

‘However, the reality of this is that we took over the business on 15th June 2019 and this occurrence happened in June 2018.

‘We were not anything to do with the business when Mr Miller booked or cancelled his wedding and we do not have and are not holding onto his money.

‘The deposit was withheld by the previous business owners who were a hotel group called Shepherd Cox Hotels.

‘As I say, we have every sympathy with Mr Miller and wouldn’t have acted this way ourselves, but, the whole situation took place prior to us taking it over.’

I Had a Virtual Bridal Makeup Trial—and Was Pleasantly Surprised