I’ve said this each year I’ve done it, but this time I really mean it: This was by far the toughest year of photos to narrow down into a single post.

I started with 17,676 … Yes, that’s a real number. I searched through those, going month by month, on my computer and dragged 166 into a folder for this post. I narrowed that 166 down to 68, but that’s where I got stuck.

It’s not that I think I have 68 world-class options making the decision so difficult. It’s more that there are so many memories and moments I attach myself to and I have the most terrible time in choosing how to eliminate them. These are my kids — what I work for daily and I don’t want to leave any behind.

So, also like every other year, I’m doing this one a bit differently. Up top sits a really solid 30 photos. They all mean something to me. I’m honestly emotionally attached to so many of these, and the hundred-plus I cut as well.

Through the text below, I’ve handed out some fun awards like I did last year. Some authentic like “best photo, portrait, etc.” Some silly like “best use of flight.” And since I had such a dang time narrowing them down, I’ve included a GIF for some of those to highlight some of the runner-ups and alternate options.

BEST USE OF FLIGHT 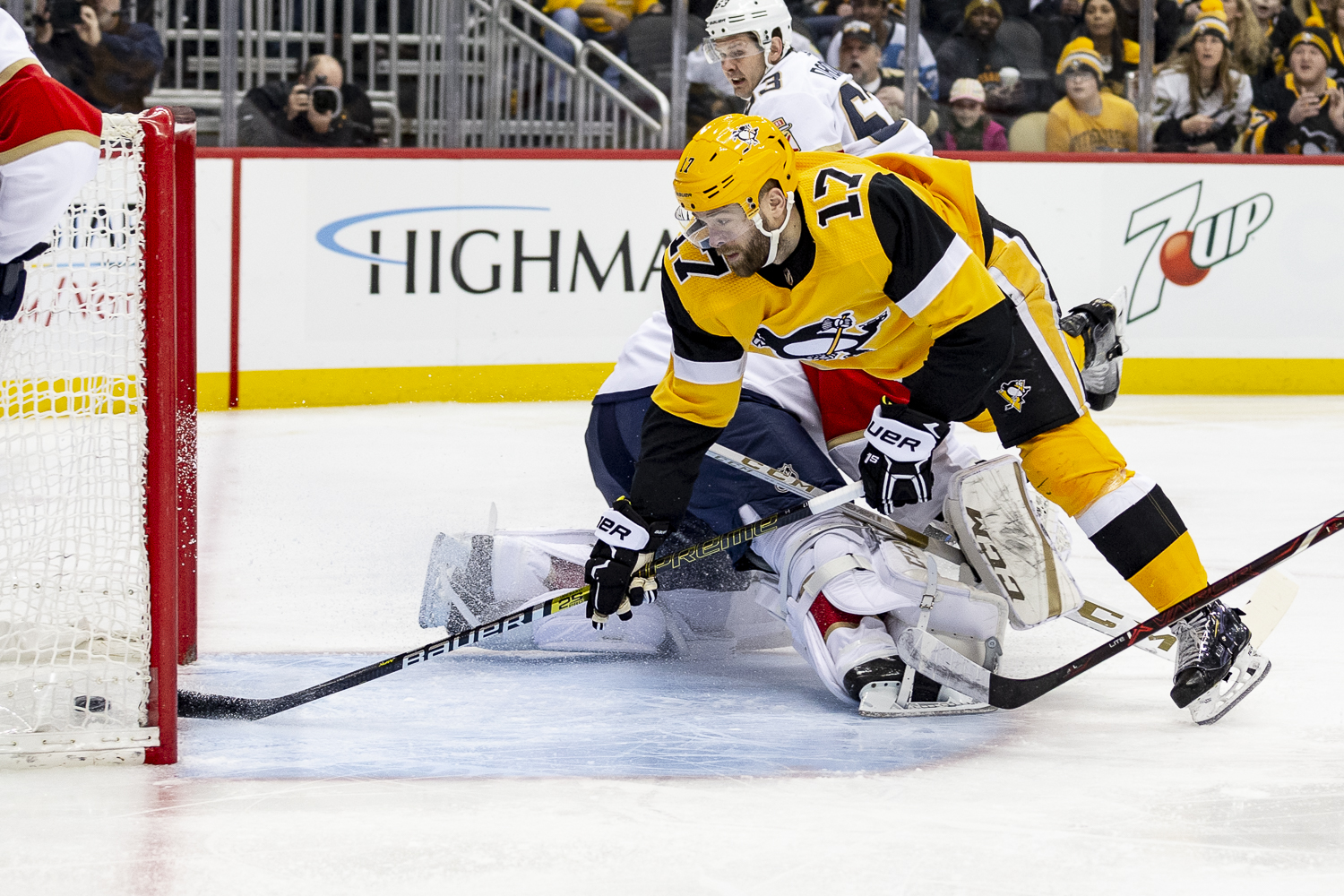 Speaking of diving, let’s take a look at the best dive/use of flight. I’m reminded of a story I wrote on Bryan Rust last season in Florida. The goal was to highlight, from my perspective, what turned Rust’s season around and made him so lethal for an extended stretch.

Contrasting that to this year, Rust doesn’t attack the net with the same reckless abandon that made me write that piece, but he’s been a crucial piece to the puzzle and scoring more without the need to sacrifice himself as much around the cage — probably a good idea after dealing with stretches of extended injury.

Rust flying over Roberto Luongo’s pad to score against the Panthers takes this prize, and it was easily one of my favorite hockey images of 2019. Rust’s face is visible, he’s just guided the puck over the line, and the majority of his body is off the ice.

Some runners up (I came awfully close to using Patric Hornqvist tossing Justin Williams like a rag doll for this one): 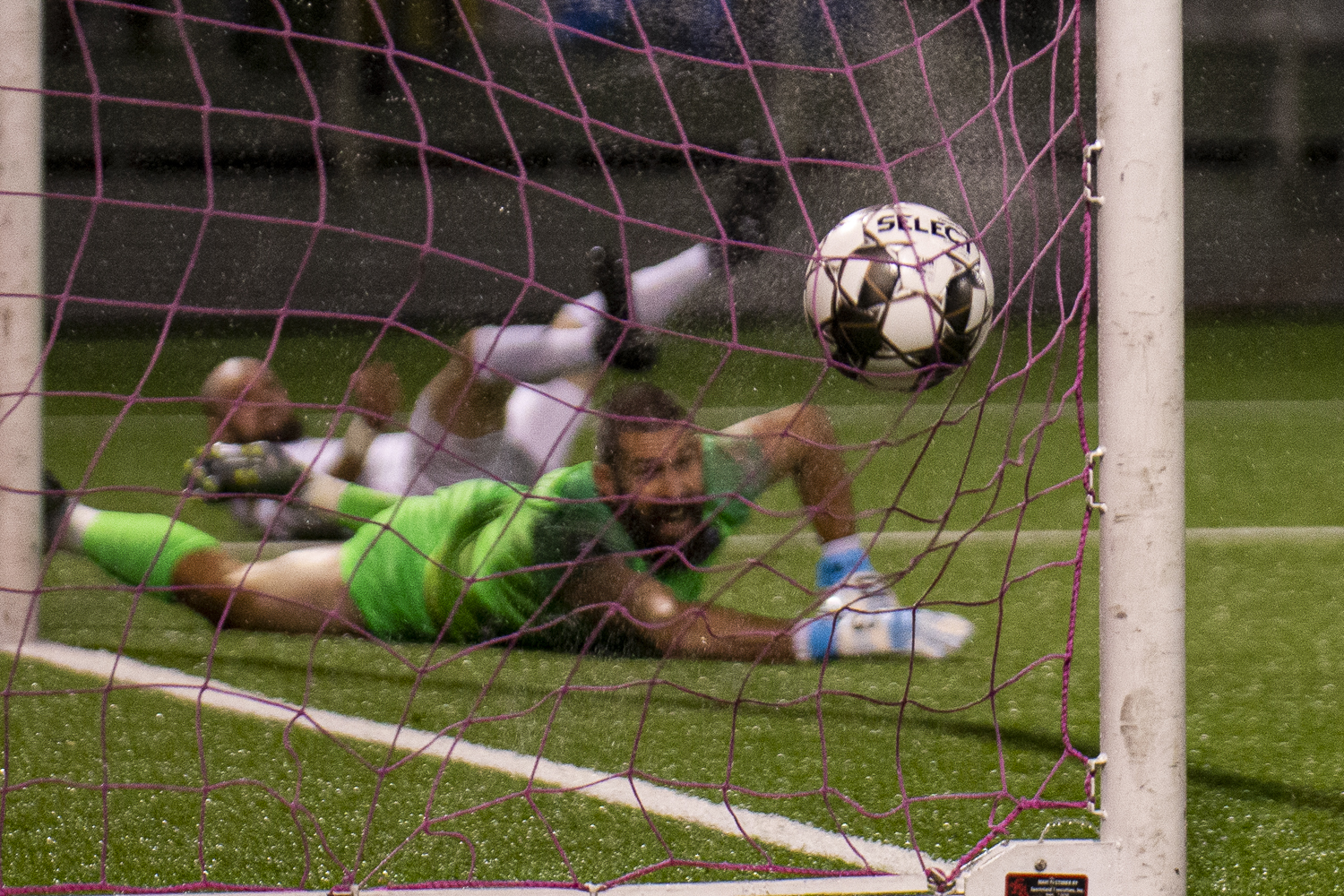 So, I have this photo from Riverhounds action this season that I don’t know what to do with. I got lucky by having my camera pick up focus on the ball as it hit the netting when I was most likely trying to get the keeper in focus. Happy accidents, happy trees, happy soccer balls. This photo just wanted to find its way in here somehow, and this is how. 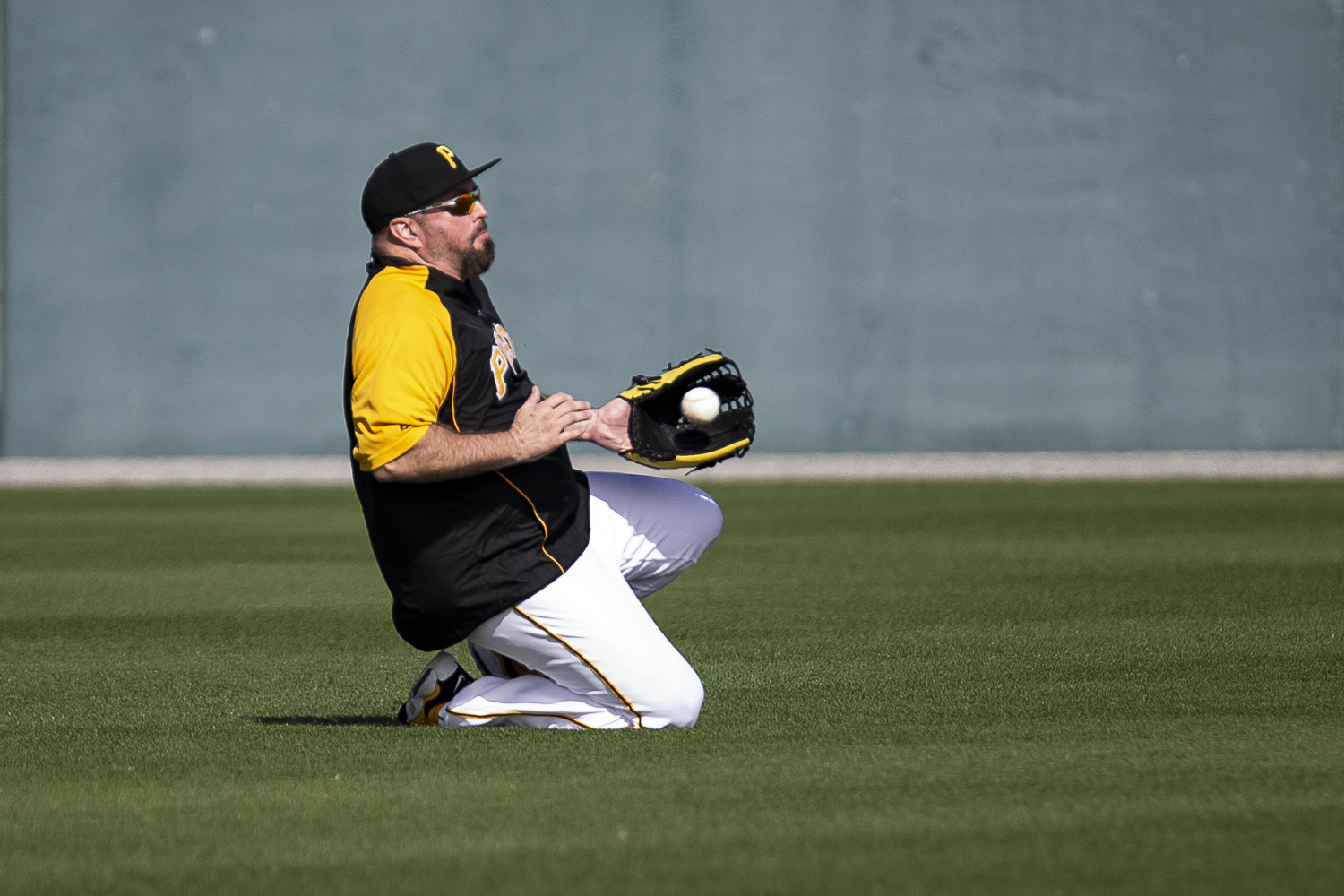 This is one of the “fun” ones as well. But there has to be a place for Garth Brooks to show off his beautiful sliding catch — this is it. I’ll always laugh about this image. It’s not perfectly sharp. Garth laughed at how it made him look and told me to “delete it” so no one could see. It’s also one of my most viewed images of all time after being used on Good Morning America and shared during Spring Training.

Runner up is a single shot … PUDDY! Also known as Patrick Warburton: 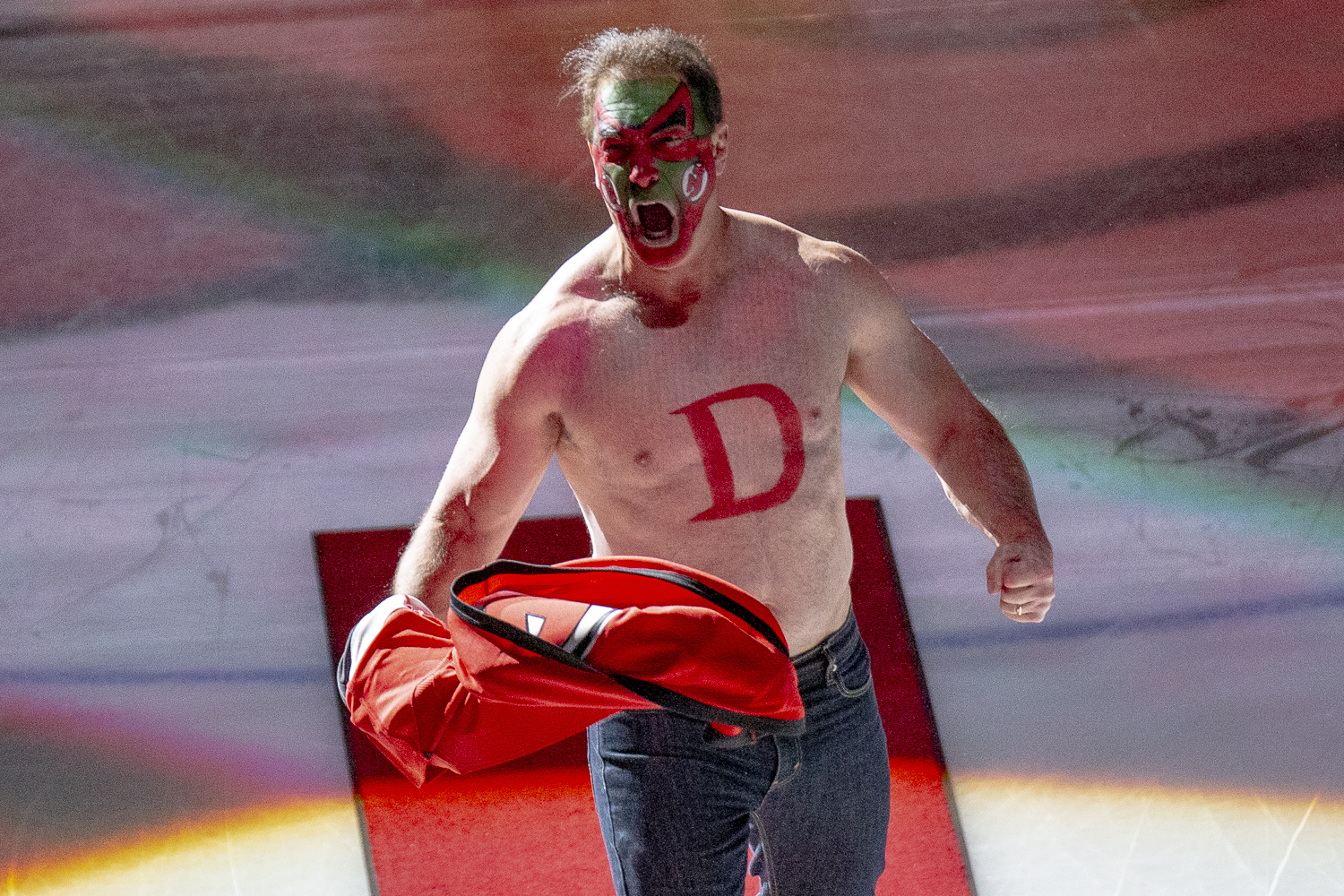 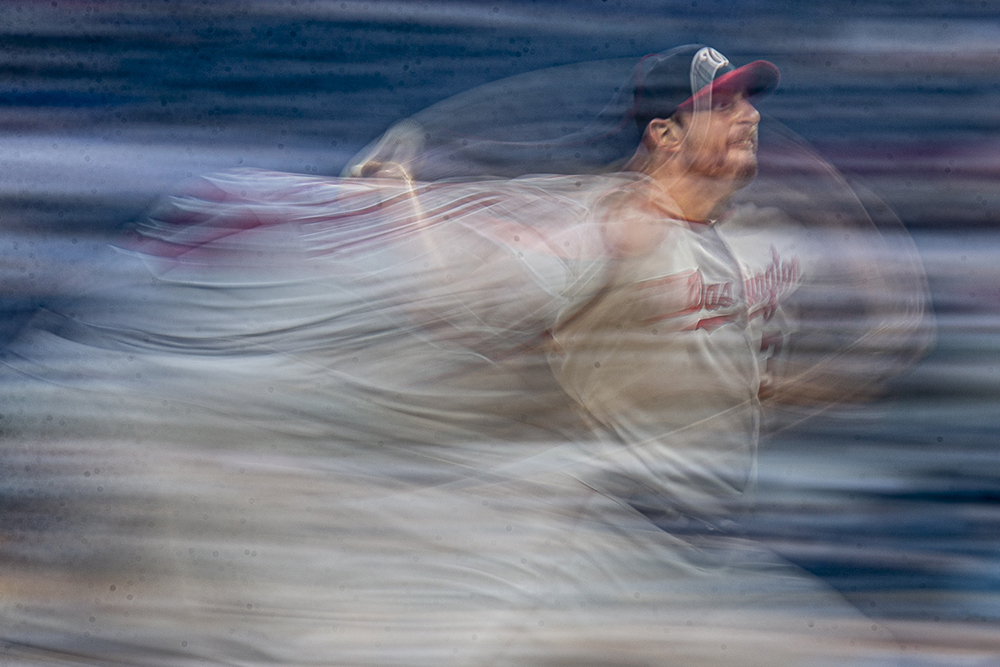 Another fun category that really gets me through a lot of baseball summer — when it’s fun to experiment and not take the same photo of the same pitcher you’ve been shooting all year. Multiple exposures, dragged shutters, panned photos … they all add some trickery and creativity to sports when you can execute well. They, uh, also show off a potentially and horrendously dirty and spotted image sensor in some cases (that’s what all those dots are in the Max Scherzer photo).

Included in other images here are a panning photo of Pirate Pablo Reyes scoring from third and a shot of a car at the Rolex 24 at Daytona endurance race (wayyy too late at night … that photo really represents my mind at the time). 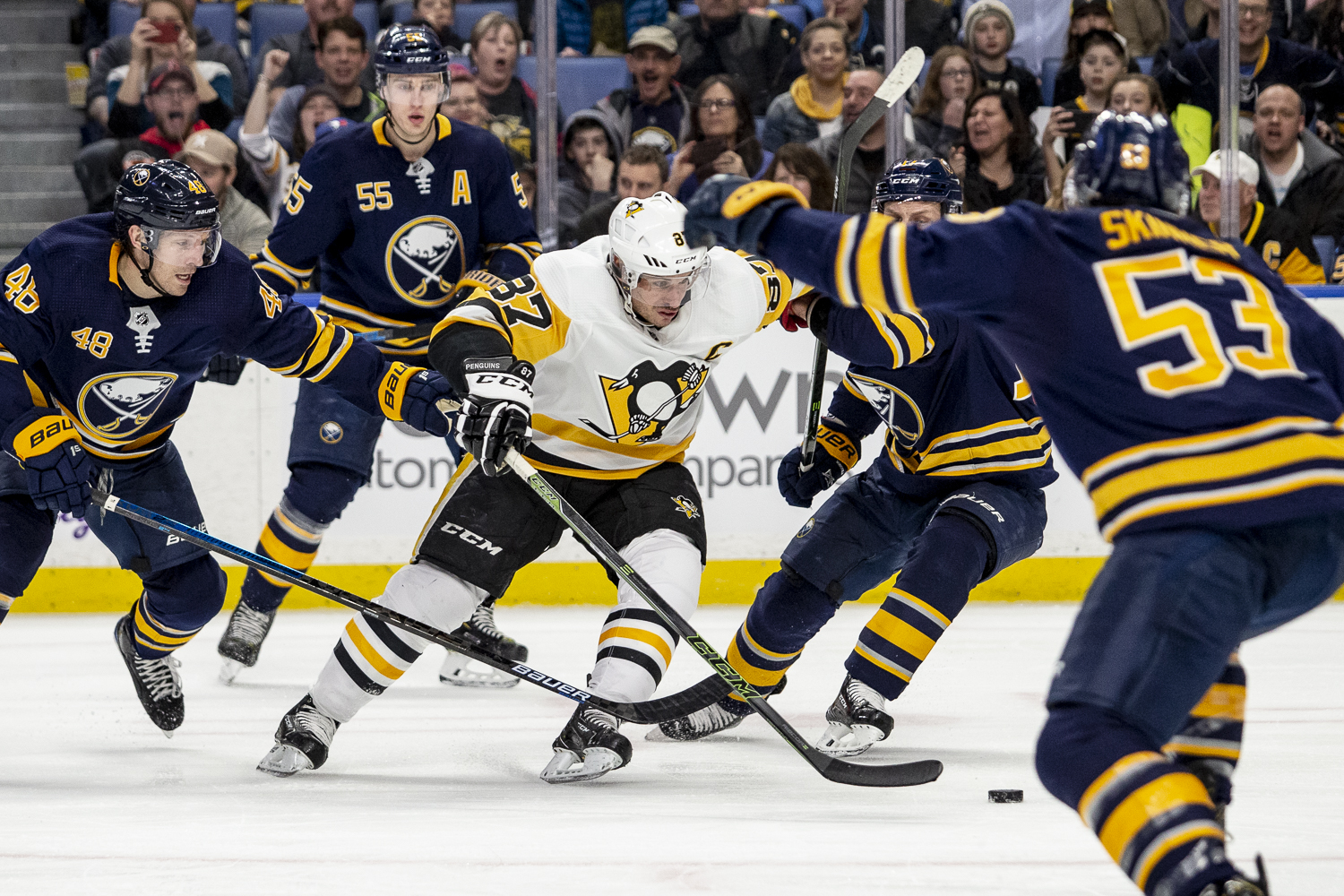 Not “Napoleon Complex” like small guy wanting to conquer, but one person taking on the world. The obvious winner here is Sidney Crosby taking on the Sabres by himself in Buffalo, N.Y. last season, but Patric Hornqvist resisting arrest by a handful of Predators is dang fun, too. 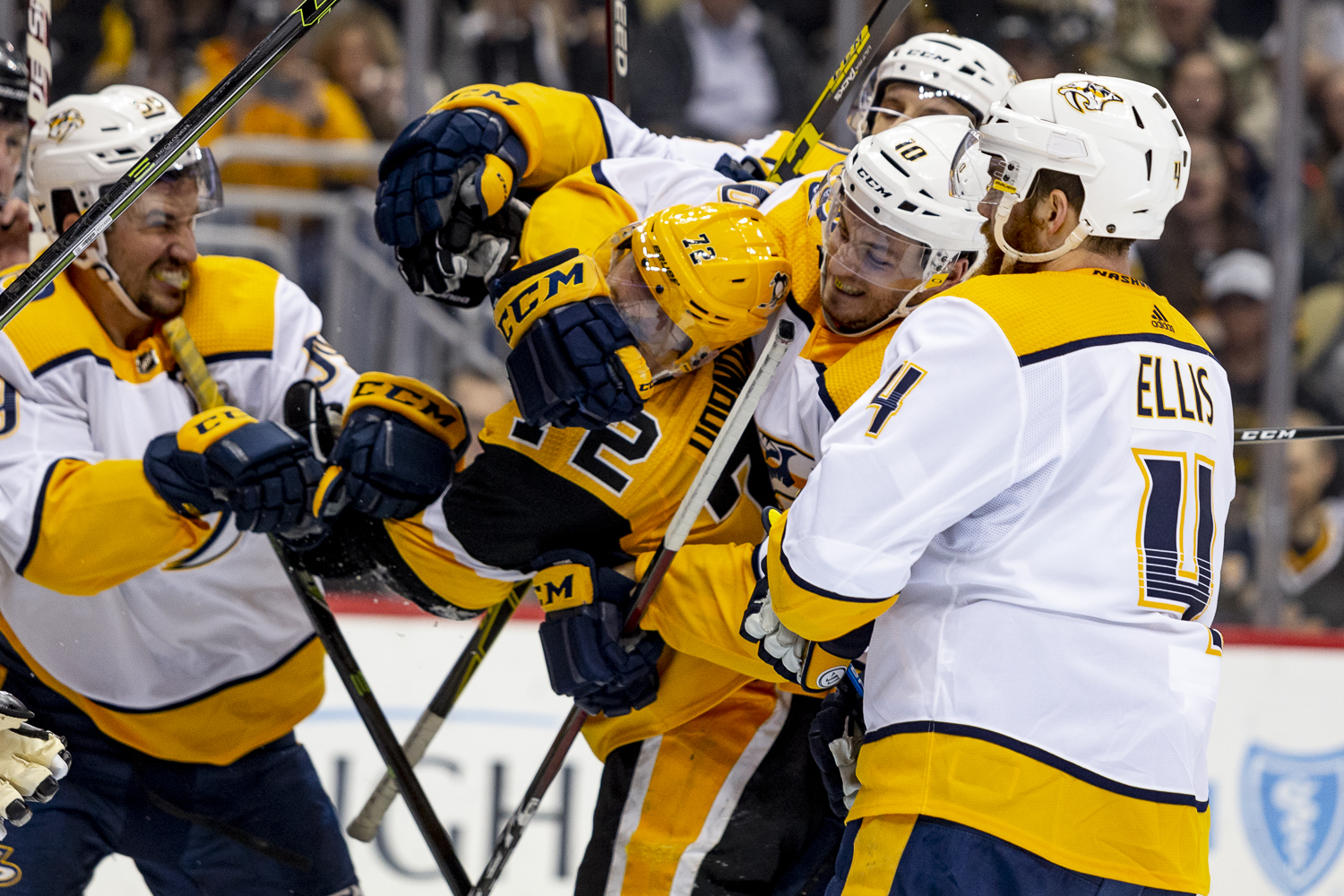 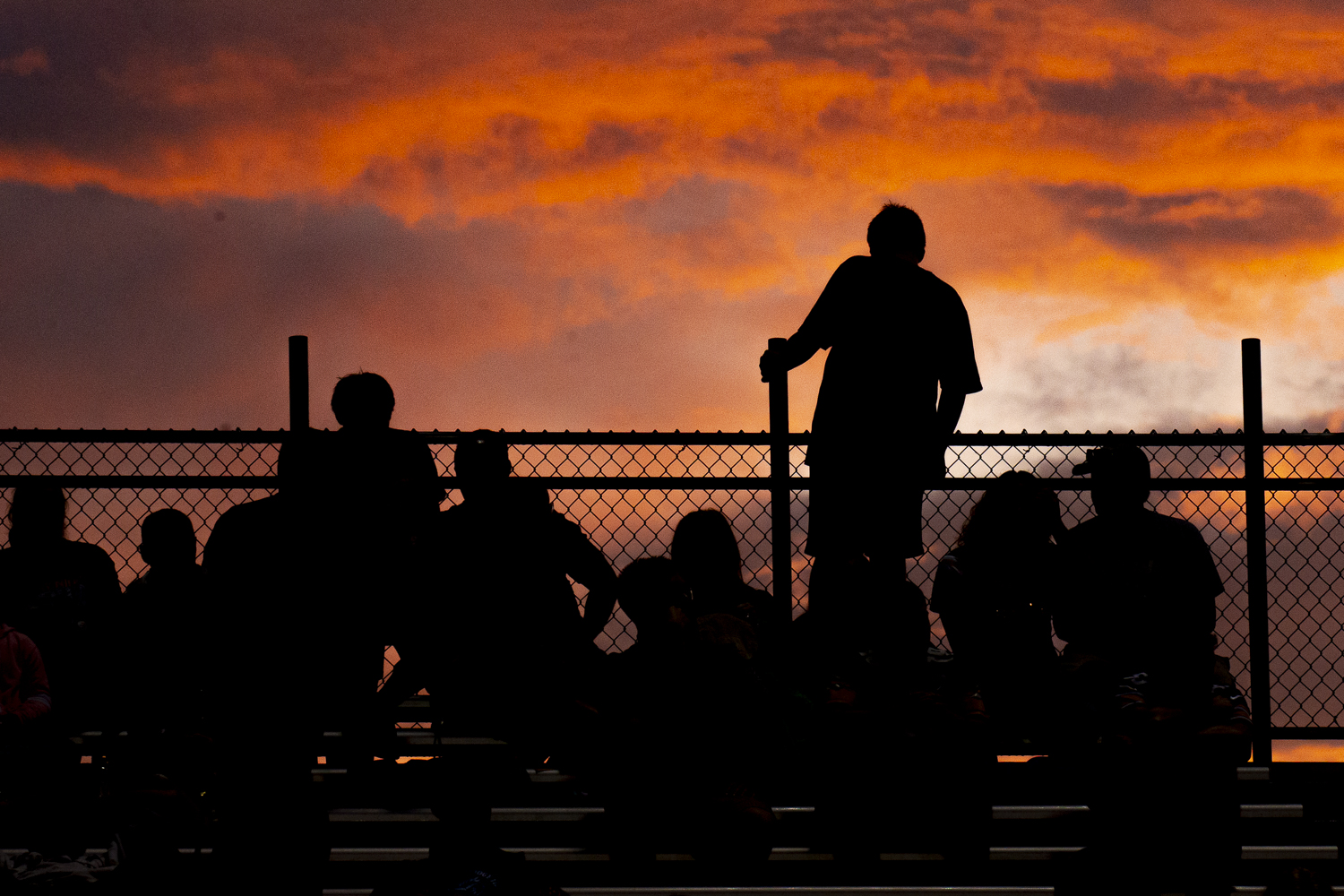 Honestly, the bag-faced Pirates fan deserves this … but the better photo is the silhouetted fans with the setting sun as the Steelers practice under the lights in Latrobe, Pa. It’s always one of the most fun nights at camp when the team busses down to the high school and entertains a packed house. 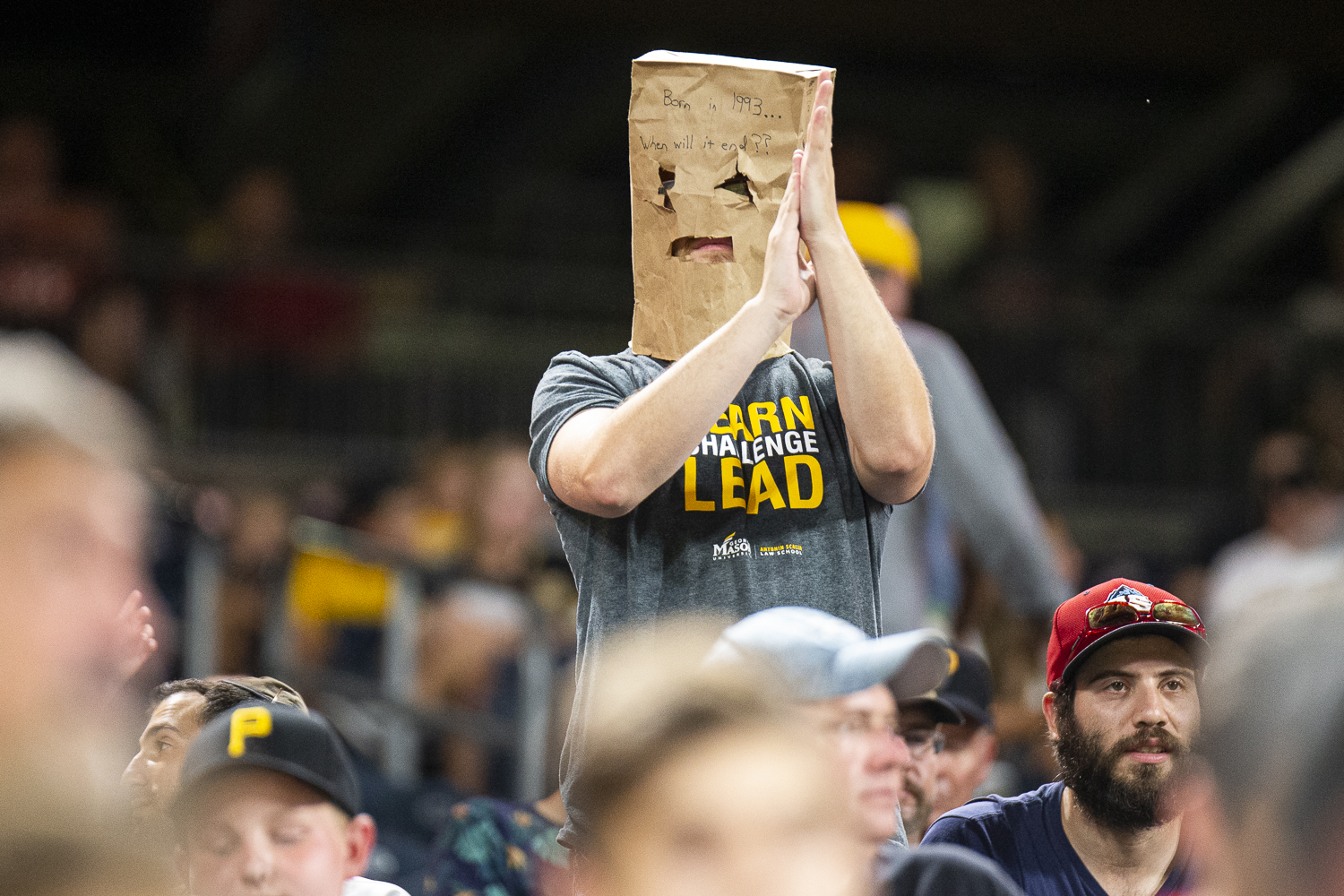 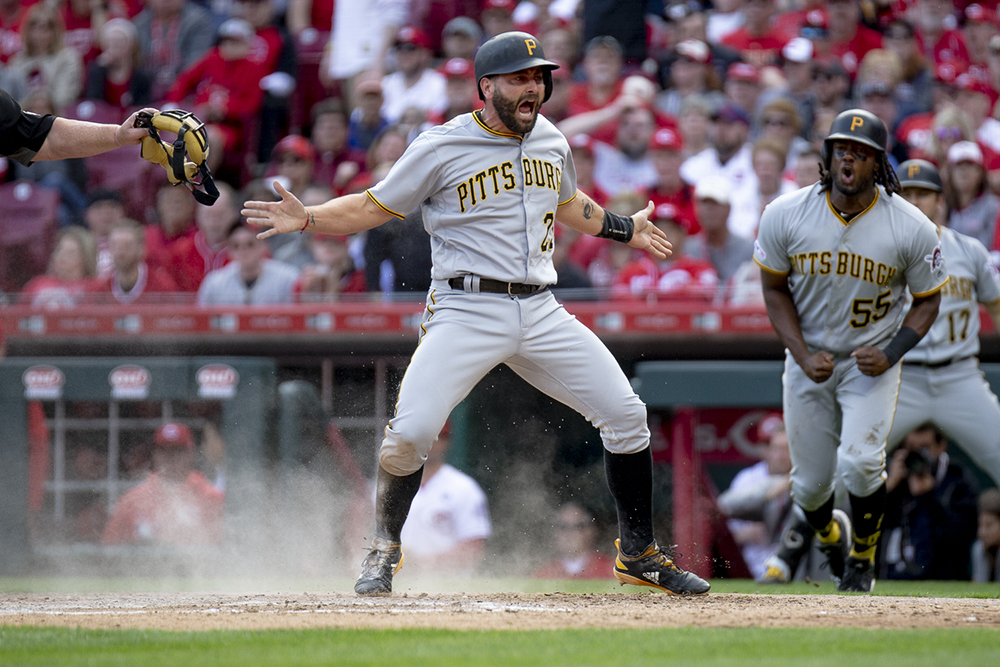 This is one of the toughest categories because it includes so many sports, so many images and really … I just have the toughest time narrowing this down. I cut really great images of Hornqvist, one I really liked of Evgeni Malkin, ones of Jake Guentzel and Crosby … just because I had to. I went back and forth over and over again between the image of Robbie Mertz leaping magnificently after scoring as well as Francisco Cervelli celebrating his run on opening day in Cincinnati. I love Brandon Tanev celebrating his overtime goal against the Avalanche and Matt Murray watching the Islanders celebrate an overtime winner of their own as well.

It was hard, but I went with Cervelli (as you’ve seen). Honestly, I went back to remembering this tweet from our Hunter Homistek that made me think about it even more. Everything I do is based on a split second. I shoot most photos at 1/1250 of a second. That’s all I need if everything works right. It certainly doesn’t make it easier, though. And, on Opening Day?

I can’t deny @mattsunday is my dude, but seriously… check this out.

Francisco Cervelli scores and celebrates for what, half a second?

Look at the frame he captured and shot over to us to use on @DKPghSports. The ONE moment everyone would want — captured beautifully. Animal. pic.twitter.com/VH4hQI5Rn4

The sleeper, literally, would have been Melky Cabrera lying on the dugout floor after scoring from first base to tie a game. Love that photo.

Check out the others:

BEST IMAGE I DIDN’T KNOW I HAD WORDS FOR 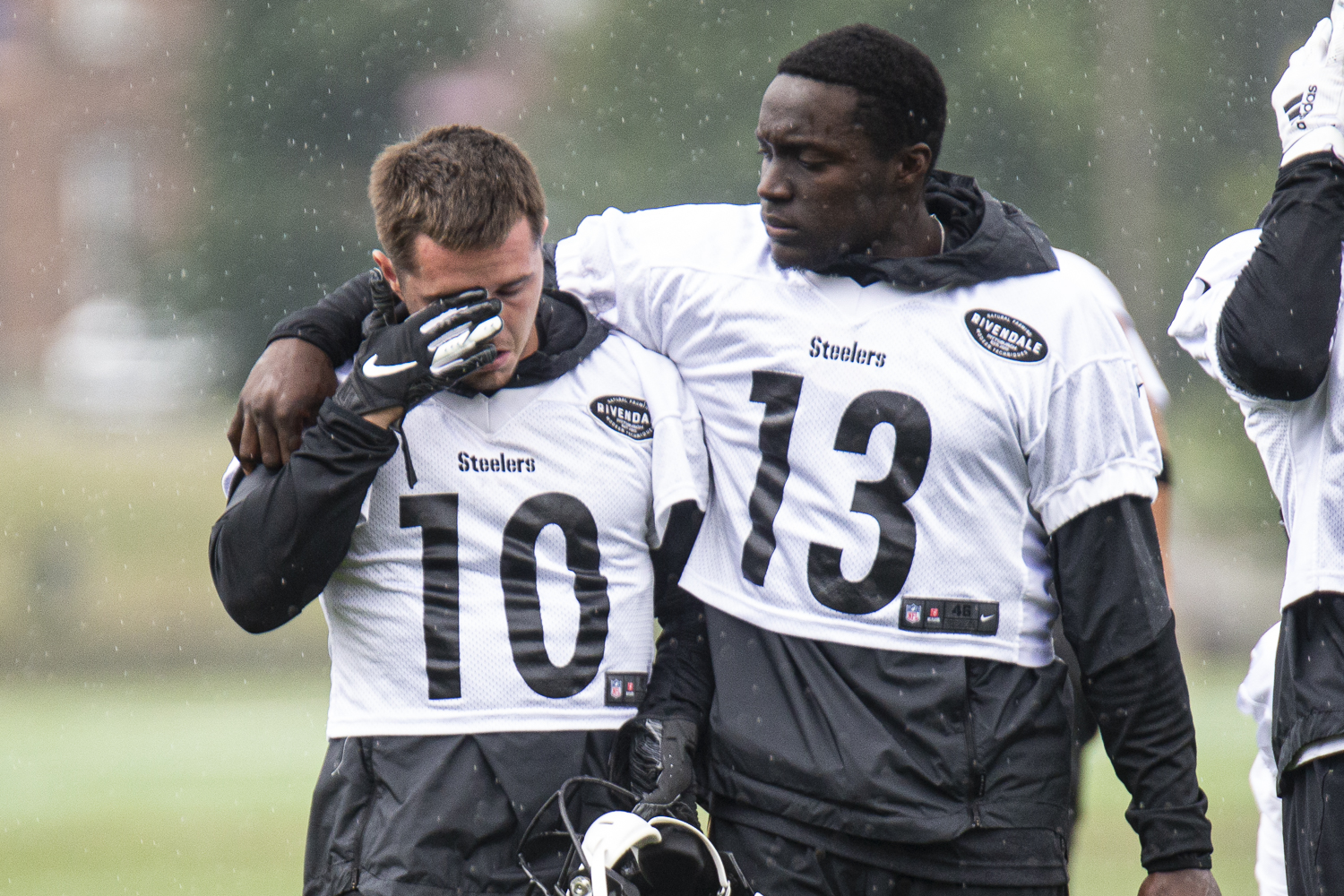 The hardest thing I photographed this year was seeing the Steelers go back to work after the passing of receivers coach Darryl Drake. I didn’t know I could put it into words before, and I’m not going to try and one-up myself. I’ll just share this link here, and thank you all again for the love when I wrote it. 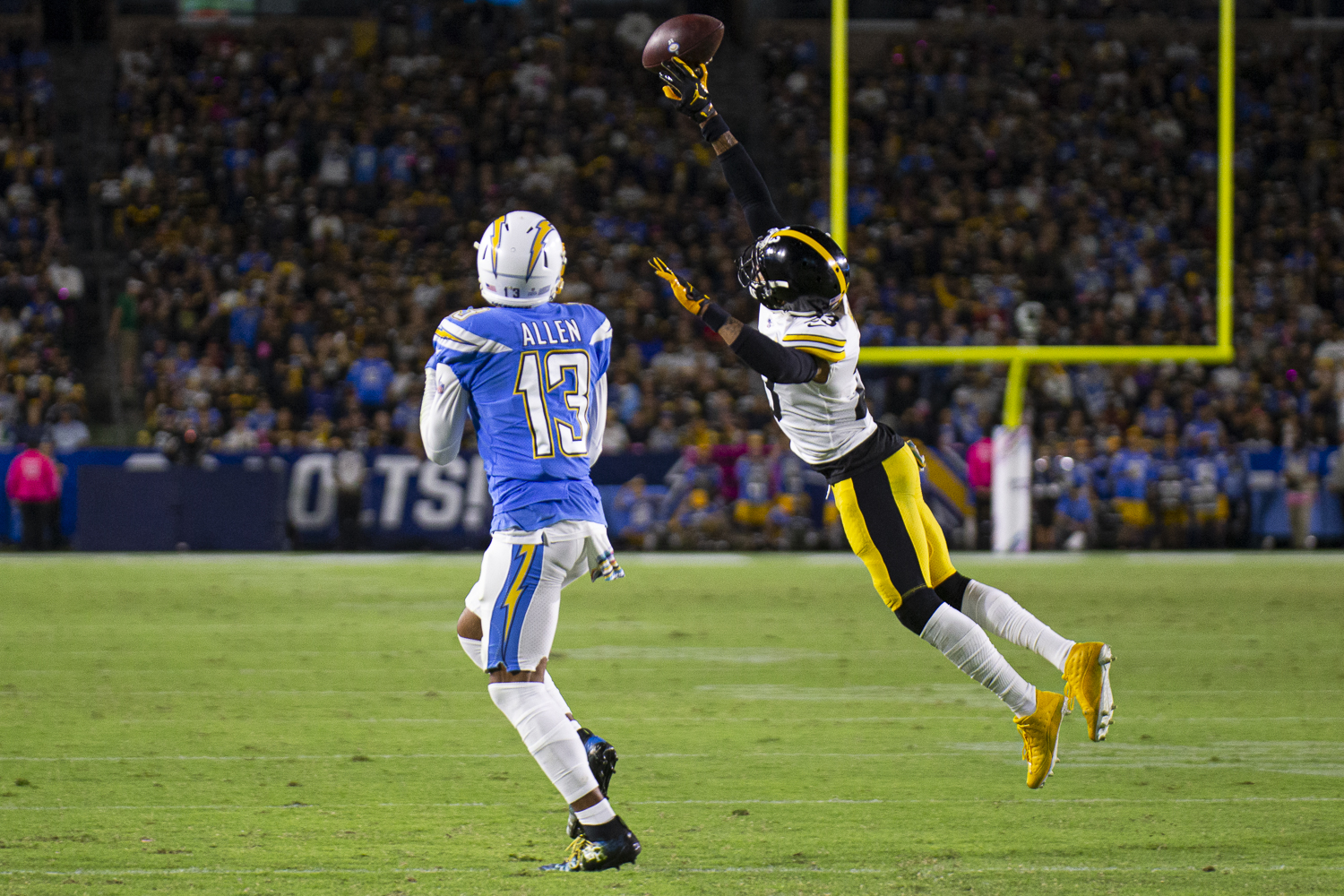 This one was actually easy for me. I have a favorite action shot from this year, even though I may have some that are more impactful looking. You’ll see below as D.K. Metcalf is bowling over Steven Nelson and Evgeni Malkin is scoring on a spin-o-rama against the Rangers. There are some fun images here. But it was always Joe Haden making a very Joe Haden play by extending to his farthest ability to break up a Philip Rivers pass on our second west coast trip of the season. 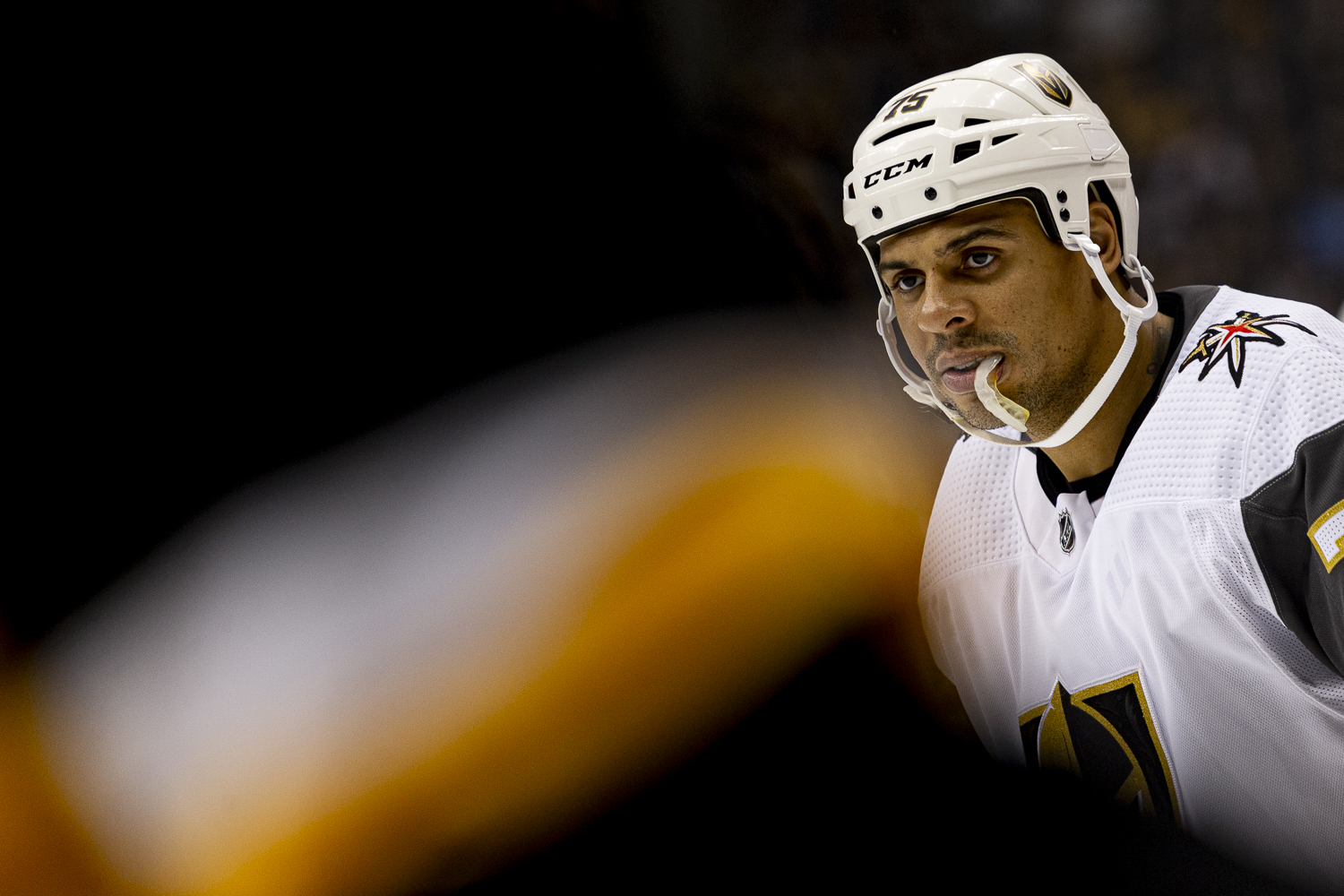 This is probably the toughest category I dive into. It’s also my favorite. I love to shoot portraits in all sports, and I feel like it’s some of my best stuff. I’ve been pushing what I do in this category and feel like I’m always growing within it. It’s truly a blast to look back and work that you’ve done and feel like you’ve done it better than you have before.

When you look at the GIF below, I included an environmental portrait I made of Phil Kessel in his return to Pittsburgh with the Coyotes. That’s not a shot I’ve always strived for. And, my favorite above? You might recognize Ryan Reaves, but it’s the photo as a whole which I really love. After being involved in so much wedding photography, and really looking at what portrait artists do with negative space created by foreground objects in that genre, I started looking to apply it to photographs I take in sports.

I often shoot photographs of guys around the face off circle, but I’m most often just looking for really tight images of faces, shields, eyes, etc. In that image, I intentionally used a Penguins’ sweater as negative space and it’s a personal favorite image from 2019.

You’ll probably recognize the Jason Martin and Tristan Jarry photos … I’ve used them once or twice: 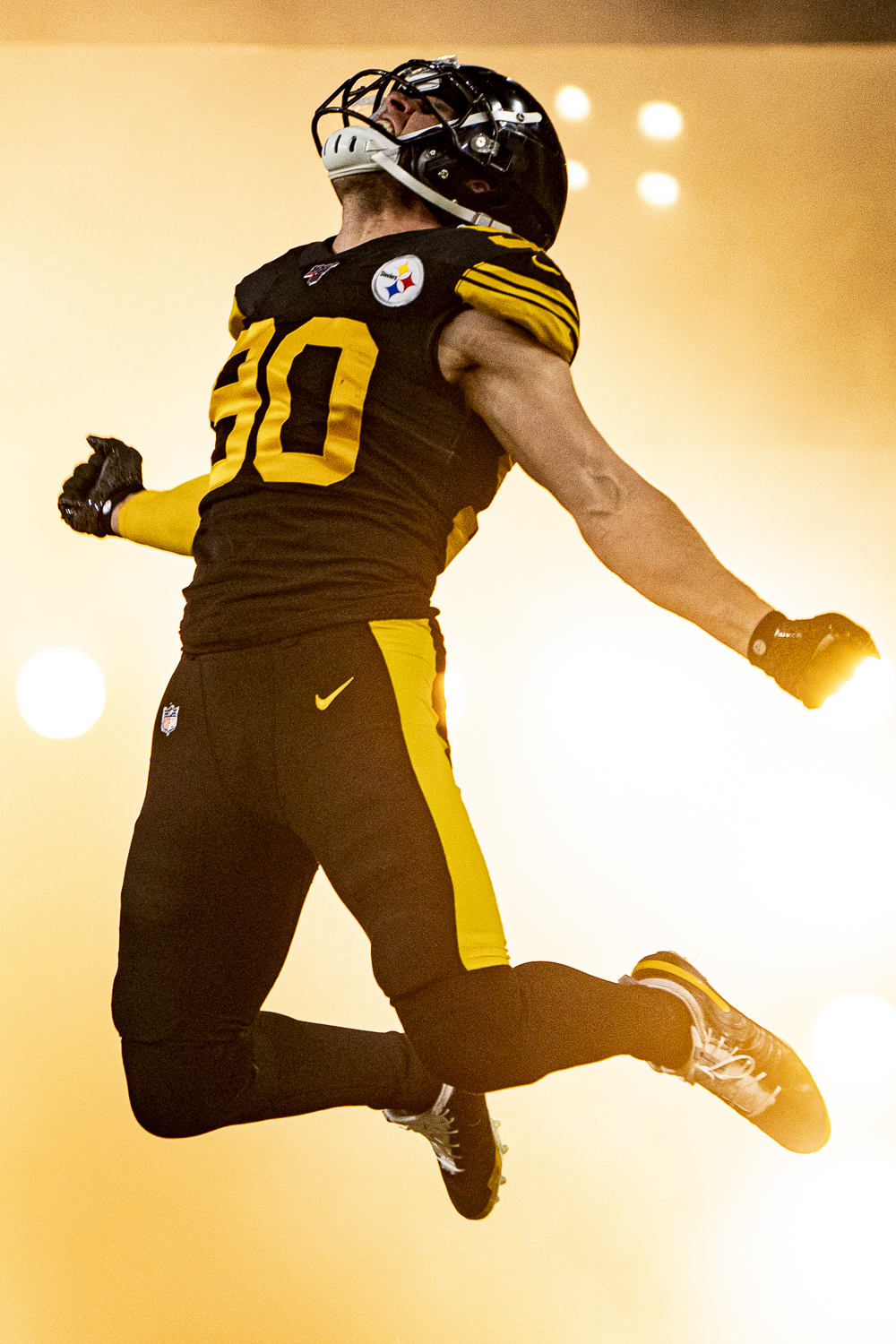 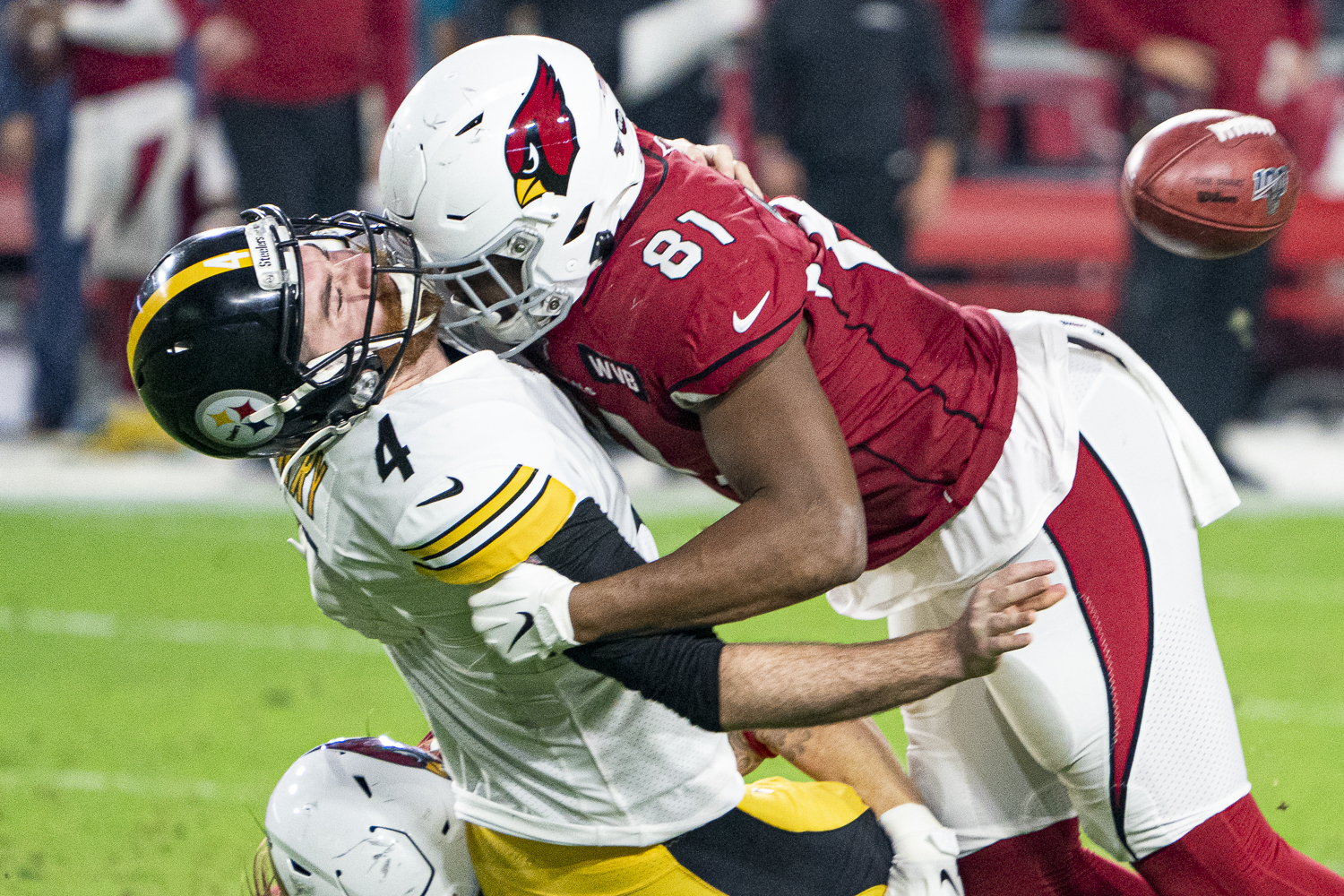 When I think of “best photo,” I’m often thinking about the best action shot. Because getting the action is often what separates a photo of something happening from any other way of viewing it. Seeing peak, frozen action is just different from watching it on video. In that regard, I really love the photo I took just a month ago in Arizona when Jordan Berry was absolutely destroyed on a fake punt, punt, almost fake punt, confused about what it really was scenario.

That’s the photo you see right there. I know everyone loves the image of Crosby against the Sabres, but this is a better action shot to me. The other is just more aesthetically pleasing and a really good overall photo.

What about the other photo of Crosby … surrounded. Not by Sabres, but by kids. That’s arguably my best photo this year and absolutely belongs here. So I’m going to give it a “co” spot for Best Photo. After I took it, I was actually asked for a copy of it by a member of the Penguins’ offices so they could hang it to honor the program. It’s one of the best honors I’ve received while covering any of the teams here in Pittsburgh and it makes it more special than it ordinarily would be. The Penguins have been incredible to me in my time covering them, so I obliged. 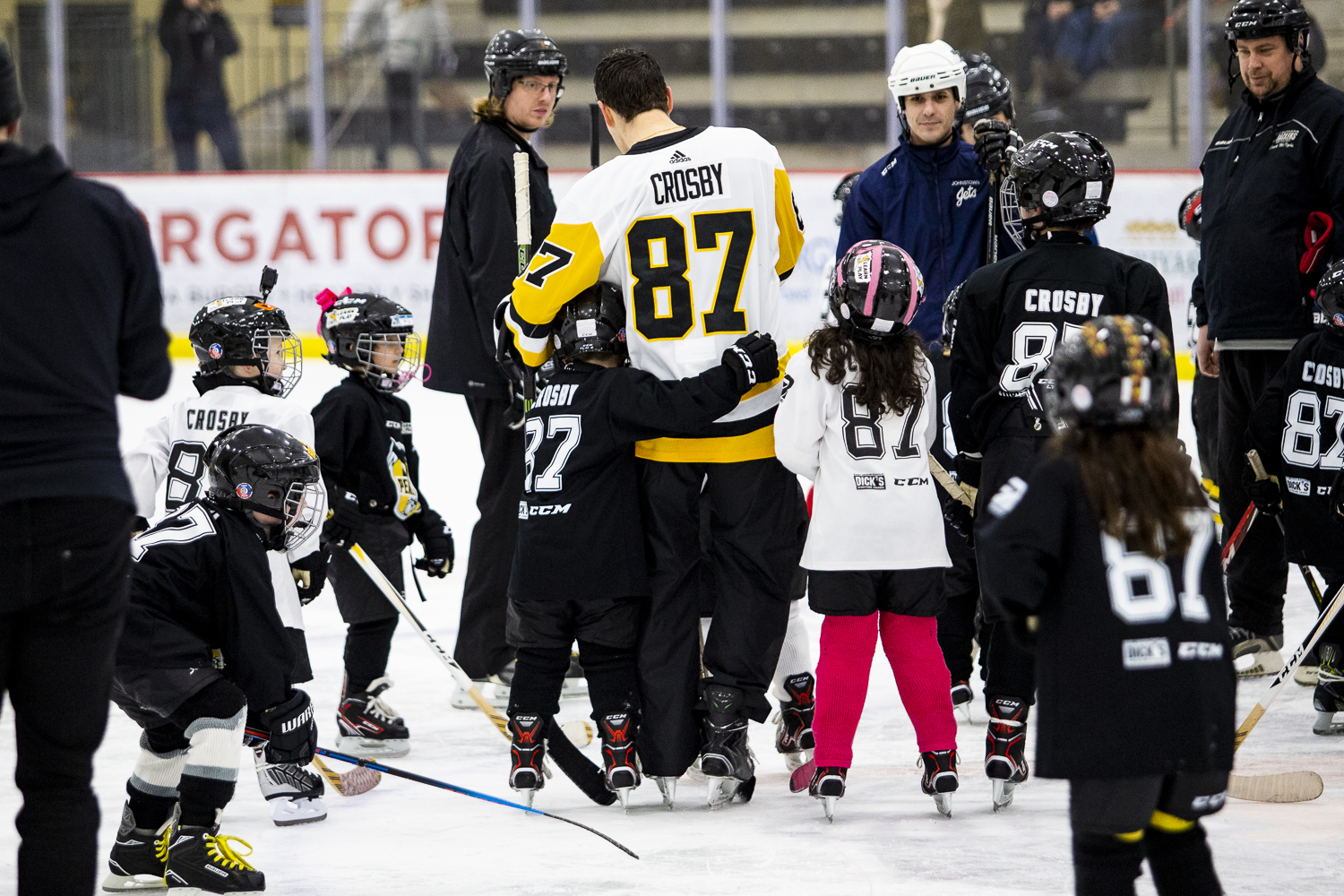 What say all of you? Did I make wrong decisions? What would you have chosen between the two at the end? Do you agree with the Reaves choice or is just my personal bias? The great thing about art, photography, etc., is that all opinions are welcome.

Let’s discuss! And don’t forget to flip through a number of images up top to browse at your leisure. See you guys and gals in the comments.