Bride-to-be Kim Dao who’s set to marry her boyfriend of nine years in a matter of weeks has decided to try on a series of budget wedding dresses to see what they really look like in real life.

The Australian YouTube lifestyle blogger said she bought three dresses, ranging between $79 to $109 online to show her 640,000 subscribers if they are worth wearing.

‘So I already have my wedding dress, but I thought it’ll be fun to try out some dresses for pre-wedding photo shoots,’ the 28-year-old said on her channel.

‘All the dresses I got were very affordable.’

Normally a US size 0 or AU size six, Kim said she ended up buying all the dresses in size two because it was the smallest size available for sale. And much to her expectations, the gowns were not true to their sizes. 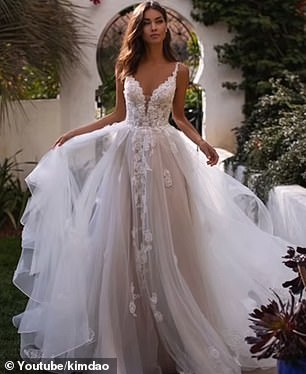 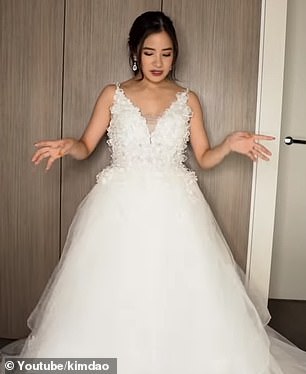 Lifestyle blogger Kim Dao (right) decided to try on a series of budget wedding dresses to see what they really look like in real life. The first dress Kim tried on cost her $109.82

The first dress, which features flower details, Kim tried on cost her $109.82.

‘I love it but it’s a little bit big here on the shoulders and back so I’ll need to alter that a little bit. But it’s really not that bad,’ she said.

‘It’s so flowy. If you don’t look at the photo, it’s actually a nice dress, but if you are comparing it, it’s nothing alike.

‘One thing I don’t like about it is the waist – it makes me look very wide.’

Kim quickly realised the flowers on the dress were glued on.

‘I hate it when that happens because I bought a few dresses previously with flowers glued on and they just like fell off straight away.’ 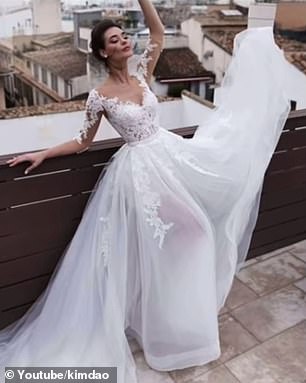 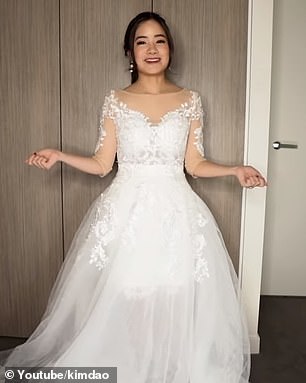 Next, she tried on was a beige-coloured two-piece gown she purchased for $83.99 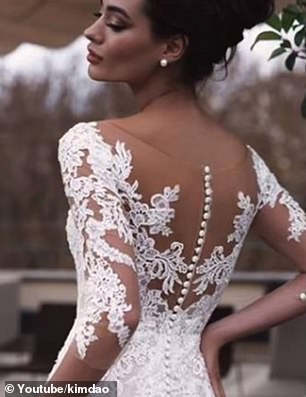 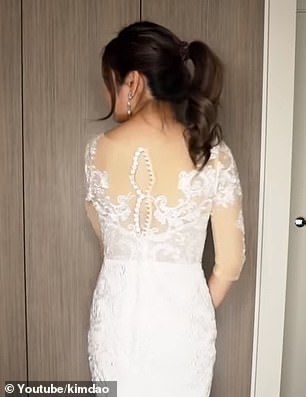 Next, she tried on was a beige-coloured two-piece gown she purchased for $83.99.

‘So first impressions when I pulled it out of the bag, I was like “yeah, this is not gonna look good”. But actually it’s not as bad as I thought it would be,’ she said.

‘The colour is too light for my skin tone. It just doesn’t really match that well – it makes me look pale.’

She said one of the best features of the two-piece dress was being able to wear it as a short mini dress for another occasion or as a long wedding dress.

‘So I chose this dress because when I saw it in the photo, [I thought] it looks really cool – you can wear it in different styles,’ she said.

‘Obviously, it’s not the same as the photo – the dress looks amazing in the photo – the transparent mesh part looks a lot darker and it fits the girl’s skin tone perfectly and she’s got longer legs, but for me, it ain’t the same.’

Kim said she found the dress more see-through in real life – and the material was irritating her skin itch. 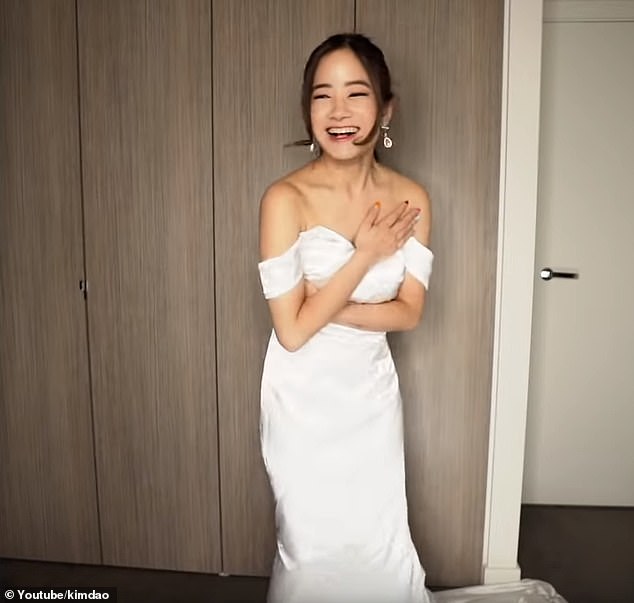 She tried on the third off the shoulder ‘mermaid wedding dress’, which she purchased for $79.22 – but she had to hold the ill-fitting gown up amid fears it would slip off her body 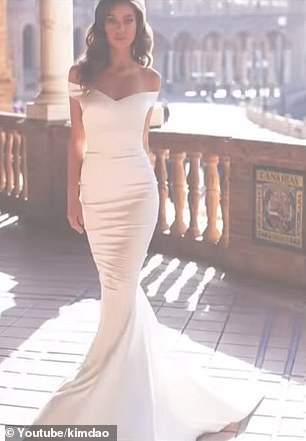 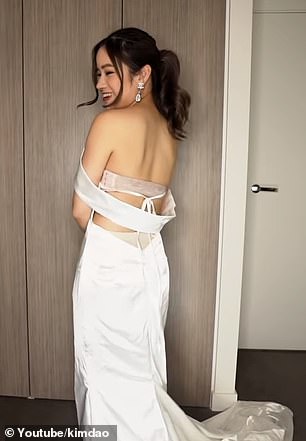 She tried on the third off the shoulder garment called the ‘mermaid wedding dress’, which she purchased for $79.22.

‘I look like I’m naked… what is going on? It’s so big,’ Kim said, laughing as she looked at the back of the ill-fitted dress.

She found the breast cups sitting below her chest.

‘Even though the dress was exactly the same size as the other, this one is a lot bigger,’ Kim said.

‘The other one was a little bit big on me but it wasn’t anywhere near as bad as this one. I have to hold the dress up, I’m paranoid.

‘The dress fits the model perfectly. Okay I actually do like the dress but the size is just ridiculous. You really need broad shoulders to fit this. I have to gym more.’