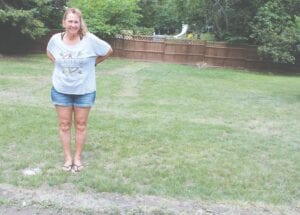 Debbie Maxfield stands in front of a lot that could’ve been under water during her daughter’s wedding reception Saturday evening if it weren’t for the Lapeer DPW that brought sandbags to channel rain runoff away from where a tent was located. Photo by Jeff Hogan

LAPEER — If it weren’t for the expedient help of the Lapeer Dept. of Public Works, a backyard wedding reception last weekend could’ve been a watery disaster due to torrential rainfall that fell Friday and Saturday.

Debbie and Greg Maxfield live on Cedar Street, just north of the alley behind the Meditation Self-Healing Center of Lapeer owned by Roy Sexton. Their daughter, Nicole, was married Saturday afternoon at the historic county courthouse in downtown Lapeer, followed by a reception in the Maxfield family backyard and a side lot that Sexton allowed her to use to set up a 30 x 60-foot tent.

While workers were on site Friday to help set up the tent the skies opened up and the rain poured off the big tent. Water also ran off the gravel alley, and began to form its own river on the sloping property. The slope brought the water into her yard.

Debbie called the Lapeer DPW and spoke to Ross Slusher, supervisor of utilities and streets, and explained her localized flooding issue that threatened to saturate the wedding reception with standing water, where the main tent was to stand. 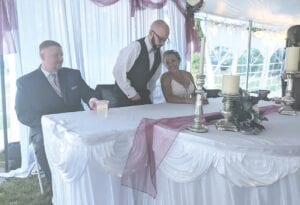 “Within two hours there was a crew that brought every sandbag they had. They stacked them along the edge of the alley. They even dug a little trench to move the water away to the other part of the yard,” said Debbie.

“These guys deserve a huge shoutout. They went above and beyond to do this for us. The (reception) could have been a disaster, but they saved it.”

Slusher said the DPW brought about 30 sandbags to the alley between Cedar and North Court streets. “She called me and said she had a wedding reception and was worried about the rain,” said Slusher about his call with Debbie. “I’m glad the sandbags helped out. We do what we can to help people as much as possible.”

Married were Nicole (Maxfield) and Chris Cifuentes, the head cook who has been at Woodchips BBQ in downtown Lapeer since it opened. Nicole works for Mary’s Gardens of Lapeer.

Woodchips catered the reception. “Patrick (owner Patrick Hingst) was here. If they needed anything he ran over to the restaurant to get it,” said Debbie.

“Bottom line, despite the rain, we still had a fairytale wedding with the support of the community,” she commented.

Monday morning the DPW removed the sandbags, the tents were gone, and other than indentations in the ground where the sandbags were stacked, it was hard to tell a 100-person wedding reception was held at the Maxfield home.

“This is what is so great about this community. People and the City helped us out, and we had a great time, despite the weather,” shared Debbie.

20 killed, 34 wounded in series of violent attacks across Afghanistan